The Feast of the Transfiguration

The Transfiguration of our Lord

NOTE: The lessons appointed for this day can be found here.

An excerpt from a meditation on the Transfiguration by the Rev. Sam Portaro, “The Brightest and Best”.

The Transfiguration is an ordination. It is not a formal priestly ordination, but it is certainly the feast affirming the particular vocation of Jesus. Before he goes up the hill, he reveals his own doubts and his need for greater clarity of discernment in his little poll, asking, “Who do they say . . . who do you say that I am?”

He ascends the hill with their answers still resounding in his head. Peter’s response confirms that at least some of the people understand him to be the Messiah. Once on the hill he is told exactly who he is, presumably by Moses and Elijah, and emphatically in the voice that proclaims from the cloud, “This is my Son, my Chosen.”

Upon descending from the mountain, Jesus experiences the first test of his new ordination as he is confronted by the faithlessness of his own disciples. He expresses so poignantly his frustration when he demands to know how long he must put up with them. But even in expressing this exasperation, he has obviously accepted what God has demanded of him. His question is rhetorical; he knows as well as we do that the answer is “for all eternity.”

After that strange experience on the hill Jesus possessed something he had not known or evidenced before. He bore within and expressed without the unmistakable assurance of one who knew his place and what was demanded of him; he knew he was loved and chosen by God. That knowledge was his authority and the core of his integrity; he knew it so surely he could never relinquish it, even to the power of death. He was changed, and everyone who saw him saw that change. He was transfigured. The brooding shadow of doubt – doubt over his own place in God’s order and affections – was replaced by the clear light of assurance.

That transfiguring light, that blinding flash of insight, opens any person as it opened Jesus. That unassailable assurance of God, in one’s place within God’s household, of one’s worth as a child of God, illuminates life. Such transfiguration begets transfiguration in others, as the light is passed from person to person, until the whole world is ablaze with glory and God’s voice resounds, “This is my world, my Creation, my Chosen.”

The Collect for the Transfiguration of Our Lord Jesus Christ

O God, who on the holy mount revealed to chosen witnesses your well-beloved Son, wonderfully transfigured, in raiment white and glistening: Mercifully grant that we, being delivered from the disquietude of this world, may by faith behold the King in his beauty; who with you, O Father, and you, O Holy Spirit, lives and reigns, one God, for ever and ever. Amen.
A Meditation on the Transfiguration using
Anglican Prayer Beads 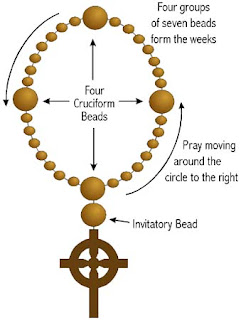 Moses came down from Mount Sinai. As he came down from the mountain with the two tablets of the covenant in his hand, Moses did not know that the skin of his face shone because he had been talking with God. (Exodus 34:29-35)

You will do well to be attentive to this as to a lamp shining in a dark place, until the day dawns and the morning star rises in your hearts. (2 Peter 1:13-21)