The Meek Are Getting Ready 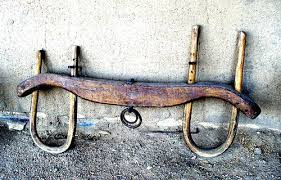 
“Come to me, all you that are weary and are carrying heavy burdens, and I will give you rest.  Take my yoke upon you and learn from me for I am meek and humble of heart.”

That’s what Matthew reports that Jesus said. I don’t know about you but I really need to hear those words today - especially the part about being weary and carrying heavy burdens. And, being given rest.

Our country seems no longer to be a “melting pot” but a boiling cauldron of dissent and divisiveness and I confess I am weary of it all. As of today, there are exactly 122 days to the election. 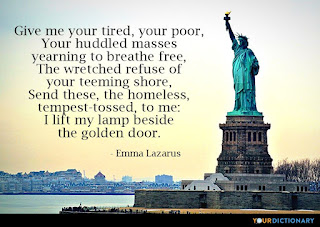 I don’t know about you, but that can’t come soon enough. Then, whatever happens, we’ll be able to get on with continuing the great, on-going experiment we call ‘democracy’ – an idea which many will celebrate this long holiday weekend.

We hear an echo of these words of Jesus in Emma Lazarus’ poem which is engraved on the base of The Statue of Liberty.

It’s these words, this morning, that catch the eyes of my soul and the ears of my heart:

"Takemy yoke upon you and learn from me for I am meek and humble of heart."

That's a difficult message to digest, especially if you confuse meekness and weakness.

My dear friend Louie Clay Crew used to say, “The meek are getting ready.” I never really understood what he was saying until one day I asked him. I learned that there is a big, important difference between being meek and being weak.

That's what happens when you as an English professor about the English language.

Louie explained that it takes strength of character to be meek and offer a meek disposition.  It is a deliberate choice to be meek, to not to assert oneself or press an advantage.

Weakness, by contrast, doesn't have the capacity to assert itself. It's the opposite of strength.

Take a moment to let the idea about meek vs. weak sink in.

Certainly, meekness seems in short supply in our world today. We tend to be more interested in self-protection and self-centeredness. That often causes us to adopt a defensive posture to our ideas and positions. It takes real strength to deliberately not assert oneself or press an advantage.

There’s a wonderful example of the strength of meekness in the continuing story of the aftermath of the Binding of Isaac inthis morning's lesson from Hebrew Scripture.

Isaac was living in the Negeb, having come from Beer-lahai-roi, the spring named by his stepmother, Hagar, in thanksgiving for God saving her life and that of Ishmael, the firstborn of his family and the half-brother of Isaac. 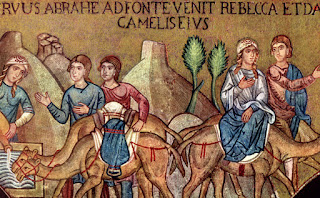 It is just my conjecture but I imagine that, after his father, Abraham, had tried to kill him, Isaac sought refuge with Hagar and Ishmael and had “settled” into life with or near them. Isaac never saw his parents, Abraham and Sarah, ever again. Even so, Abraham had arranged for a wife for Isaac. He was certain to instruct his servants to make sure that the woman chosen for her son came by her own volition.

Isaac was out walking one evening when the caravan of camels and people drew near. Rebekah looked up and saw Isaac and immediately asked his identity. When she learned that this was the man she was going to marry, she did what strikes me as odd.

Scripture says, “Soshe took her veil and covered herself.”

Again, this is just my conjecture, but I imagine that as they travelled, Rebekah had asked many questions about Isaac, the man she had agreed to marry, sight unseen. I imagine she was told about the binding of Isaac and that he had been so traumatized that he never lived with or talked to his parents again.  His mother had just died and he had not even gone home for her funeral.

I think she knew, intuitively, that Isaac, in addition to deeply grieving his mother’s death, was suffering from a traumatic experience so horrific as to defy imagination.

So, Rebekah chose to be meek. She chose to cover herself so that Isaac might not feel anxious our immediately pressured to accept her as his wife.

She wanted his choice to be his, just as her choice had been hers.

Scripture reports: “He took Rebekah, and she became his wife; and he loved her. So Isaac was comforted after his mother’s death.”
There are only a few places in scripture where this is said of an arranged marriage, and this is one of them. “ . . . and he loved her.”  Such is the power of meekness to mend a broken and grieving heart so that it may open, once again to love.

St. Paul tells us Jesus had the choice not to suffer a scratch in this world. Whereas a weak person can be victimized by the powerful, Jesus made the choice to lay down his life from a place of strength – his equality to God to which he did not cling. 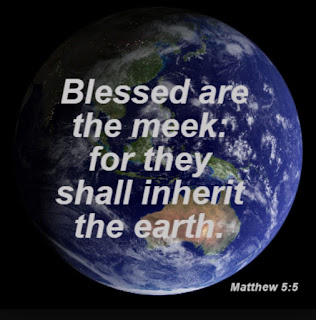 Meekness is always in charge of the event, not subject to the will of others.

As Mother Theresa taught her sisters, when you're in the presence of true meekness, you feel like you need to get down on your knees.

I am convinced that the only way we are going to get ourselves out of the mess we’ve gotten ourselves into in this world is for us to practice meekness.

We may need to follow the good example of Rebekah and cover ourselves with a metaphorical veil for a time, just until the anxiety level decreases and trust increases.

We most certainly will benefit from following the teachings of Jesus whose time on the cross went from a symbol of religious condemnation to a symbol of salvation for us all.  Jesus said, “ . . . learn from me for I am meek and humble of heart.”
Jesus also said, “Blessed are the meek, for they shall inherit the earth.”

To which I will add my own: Blessed are those who are weary and carrying heavy burdens, for the meek are getting ready to take on the yoke of Jesus.

Thanks be to God.