This is Chris and Lily. They were married last night in an amazing wedding presided over by the Rt. Rev'd John Shelby Spong in a penthouse loft on the lower West Side in NYC. Chris' parents are members of my congregation.

The statistical odds of these two people getting together is so remote as to be staggering.

The Groom's lineage includes mainland Chinese and Hawai'ian via the Colorado Rockies and New Jersey.

The Bride's lineage includes Korean and Filipino via Argentina and New York City. 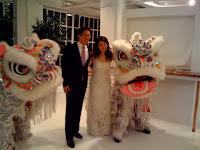 The Wedding festivities included a visit from two Chinese Dragons who came accompanied by loud crashing cymbals and beating drums.

The were 'fed' something green on a long stick which the bride and groom bravely fed to them.

It is said that now the Evil Spirits will not come into their marriage.

The dinner buffet included an absolutely amazing array of traditional Korean and Chinese food along with a few Japanese Sushi chefs, just for good measure. 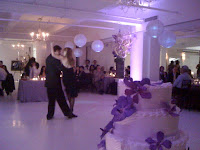 During dinner, we were entertained by an Argentinian couple who danced four different versions of the Tango for us.

They were dramatic and romantic and very, very exciting.

As they moved around the dance floor, there were occasional gasps and ooh's and ahh's from the very appreciative audience. 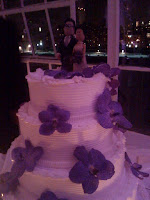 One might think, with all this emphasis on things that are traditional to both families of origin that the wedding ceremony and wedding cake would be something more . . .oh, I don't know . . . exotic.

Not so.  The wedding service itself came right out of the Book of Common Prayer.  We all said the Lord's Prayer together and heard that magnificent section from St. Paul's letter to the Church in Corinth on love.  We also heard some profound words about love from Mother Theresa and Kahlil Gibran.

And, as you can see, the wedding cake was pretty traditional.  Okay, so the figures on the top of the cake are a little unusual, but they were thoroughly reflective of the sense of humor of the happily married couple. 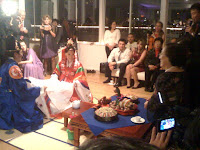 After appropriate bowing and pouring and sipping of tea, the father of the groom makes a speech, after which some nuts and dates are thrown into the apron spread out by the bride and groom.

Whatever the couple "catch" in their apron is symbolic of the number of children they will have together.

The ancestors say that these two will have eleven girls and six boys.  We don't yet know what Chris and Lily have to say about such generosity. As we watched the magnificent sunset, high above The City That Never Sleeps, I looked around the community that had gathered there, to witness and bless the joining of these two souls in Holy Matrimony,

We were Korean, Chinese, Hawai'ian, Polynesian, African-American, Argentinian, and Western European people who held equally diverse faith practices - Christian and Jew, Buddhist and Taoist, several fervently committed agnostics, no doubt a few atheists, and a significant number of people from The Temple of Understanding.

I thought of the disdain with which the Bishop of South Carolina and his Canon Theologian speak of what they call 'indiscriminate inclusivity'.

It is, I believe, inherent in the nature of God to be indiscriminate in Her inclusivity.  We can make all the rules we want about who is in and what is out.  We can be selective in who we invite into the 'inner circle' of what we believe.


God, I think, has another idea.

That Divine Idea trumps any which happen to emanate from the limited inner recesses of the human mind which fervently believes itself to understand the Mind of God.  And, wants to impose those beliefs and images of God upon others.

I looked deep into the dark sky of the City and imagined each of the bright lights twinkling there as representative of every person in that room, and the hundreds and thousands and millions of others who were not present in that room, but represented in the radically diverse cosmos of the landscape of God's Realm.

The present may look dark and foreboding, but the future is very bright indeed.

All we need do is open our arms in the same loving embrace with which Jesus stretched out his arms upon the hard reality of the cross.

Ah, and therein lies the rub, doesn't it?

I think these posters, designed by Larry Graham in Atlanta and featured in today's Lead at Episcopal Cafe, sum it all up pretty nicely.

What God has joined together, let no one - not even well-intentioned, pious theologians and bishops from South Carolina or any other part of the Church -  put asunder.

Somebody give me an 'Amen'.
Posted by Elizabeth Kaeton at 7:30 PM

What a beautiful couple---Mazel Tov! :-D

And another loud AMEN!!

Anyone who doubts God's indiscriminate inclusivity just needs to look at creation with all of its rich diversity.

What a splendid couple! May God shower them with blessings.

I think our loud Cyberspace Amen's still reach and are pleasing to God's ear. Thanks to you all.

What a timely reminder that it was Jesus himself who taught the Gospel of Indiscriminate Inclusivity (Luke 14:16-24)!

Add another Amen from me. Wonderful description of "indiscriminate inclusivity.

Amen indeed. And I too love the line "indiscriminate inclusivity." I Googled it and found a Methodist pastor opining, correctly in my view, that the term is redundant - http://day1.org/1600-indiscriminate_inclusivity_of_course

Kirk - I couldn't agree more. The blog is wonderful. Thanks you.