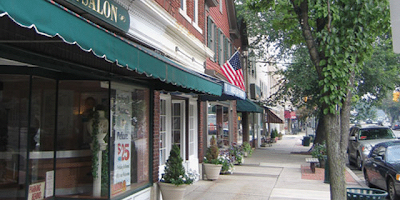 Small towns are peculiar in that their uniformity often belies their uniqueness.

Main Street USA is so iconic that even Disney has made it the centerpiece of their Theme Park.

Yesterday, I posted a piece on the shocking appearance of hate in our community in the form of anti-Semitic "litter" that appeared on our streets.

It is shocking precisely because it is so out of context with the rest of the town. I mean, look at that picture above. It's the view of Main Street from the intersection of Center Ave. The second door down is 'Angie's' - my favorite place where you can eat breakfast while you get the latest on the 'buzz' in the town.

Perhaps that's what makes places like Chatham the preferred target of bigots and other hostile, anxious, angry people.

Didn't Jesus tell us something about the Light and how Darkness tries to destroy it? The metaphor has its power in the truth.

Yesterday's Wall Street Journal had this article, however, which speaks volumes about the goodness that is here.

Some of you may remember the story about "Fr. Ed" - my Roman Catholic colleague who was murdered, allegedly by the sexton, "Mr. Jose" - while he was in the rectory.

The WSJ post is a reflection from the father of one of her classmates about the tragedy and the community which is trying to live out the Gospel.

And so the people of St. Pat's rallied. There were the staff and teachers who worked hard to keep things normal and see Mr. Jose's daughter graduate. The school parents who opened their homes. The basketball coaches who looked out for her, without ever making it obvious. The local police who made quiet drive-bys, to ensure no kook showed up to disturb the peace.

Even so, of course, awkward moments were inevitable. So early on, at a meeting of parents, the principal was asked what we should tell our kids lest they inadvertently say something hurtful. This good woman replied, "Tell them, 'when you speak, let Christ fill your hearts.'"

The principal's trust was well founded. In the days following the killing I mentioned to my daughter that her classmate might not return, with her mom maybe fearing someone might say something unkind. "They'd better not," responded my eldest. Thus would she and her fellow eighth-graders wrap their classmate in their love.

This is the real stuff and the real people behind the perfect facade of Main Street USA.

Yes, there will always be an "undercurrent of hostility" in small towns that is often unseen to the untrained eye.

Some people do live 'lives of quiet desperation'. Suburbia is filled with them. Sometimes, the desperation of those lives erupts in sudden, shocking ways. To try to ignore or deny it is only to fuel the desperation.

And yes, the "Main Street USA" in all small towns will continue to be the target of the angry hostility and violence of bigots.

Meanwhile, good people, decent, regular people, like those at St. Pat's, are living lives of quiet faith that speak to the hearts that long for a world where love and peace may grow and flourish.

Yes, this is an article about the community of St. Pat's, but there are people like this in churches and synagogues in this town and in this area.

As the author says, let us be grateful when any child anywhere can "come of age in a place where the commandment to love was deemed most precious when it was most difficult."
Posted by Elizabeth Kaeton at 11:38 AM

Is that a James Taylor song?