I have nothing to say 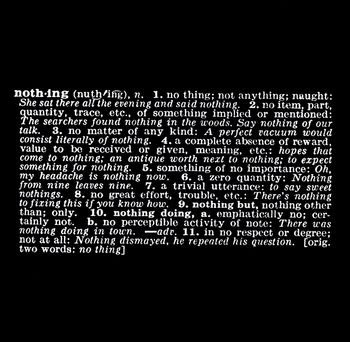 There's so much happening in the world.

The beginning of the end of DOMA - thanks be to God.

The attempt by the Governor of Wisconsin to shut down unions as Democratic representatives continue to boycott the government and the people of Wisconsin continue to demonstrate in the Capitol.

Unemployment rates continue to rise and the deficit continues to spiral upwards and out of control.

The fact that, even as we speak, federal agencies are making plans for an orderly way to shut down nonessential services if Congress fails to pass a budget on Friday which they have not done, as yet.

Meanwhile, Senate Majority Leader Harry Reid made a Big Speech to the Nevada State Legislature this week and surprised everyone by demanding that the state have an “adult conversation” about its legal brothels. (No, I am not making this up.)

The rioting in Libya and the almost incoherent ramblings of Muammar al-Gaddafi, which is Really Scary because he does have nuclear warheads in his possession.

The rising price of oil as a direct result of the unrest in Libya and the Middle East, which provides the United States with as much oil as that which is produced in the Gulf of Mexico.

Meanwhile, as we continue to be dependent upon fossil fuel which is decidedly not good for the environment comes the sad news that, because the Federal Government has now mandated "energy saving light bulbs" (CFLs), rendering the old, traditional incandescent light bulb obsolete, the E-Z Bake Ovens, which used to produce little (albeit bad tasting but fun to make) cakes by the heat of an incandescent light bulb, will be "collateral damage" to the War on Environmental Pollution and no longer be made.

The continued, sustained attack on Reproductive Rights in particular and women in general by the new majority in the House.

JLo's meltdown when Chris Medina was eliminated from the "Top 24" on "American Idol".

And, as if that wasn't enough, the news that Christine ("I Am Not A Witch") O'Donnell is being considered as a contestant on "Dancing With The Stars."

It's all too much for one mind to process.

I really have nothing to say.
Posted by Elizabeth Kaeton at 7:10 PM

My daughter has an e-z bake oven. I wonder where we can find out if we can use CFLs in it. I would prefer they not discover our ages and how old she was when she got it.

"Nothing to say." Really? Seems to me you done said a mouthful.

Naww! I didn't think it could really be true. No--nuhuh. I have NEVER known you to have NOTHING to say, Elizabeth Rex 2 1/2!

You say nothing just as well as you say something :-)

Hutch - Our granddaughter got an ez bake oven for Christmas a few years back. I don't think she's used it for some time - saving it for her baby sister, who now won't be able to us it. Sheesh!

Hey, cajun and Muthah - I think I've been found out.

Well, in Buddhist perspective, "No Thing" is the MOST profound thing one could say! }-)

I once taught a Sunday School class, and asked one of the teens what he wanted to talk about that day (before bureaucratic-style Sunday School courses), and, in teen fashion, he said "Nothing!"

He wished he hadn't as I explained the Merkabah system of mystical thought, relating it to Sunyata in the Buddhist belief system, and how nothing is No Thing, which is the undifferentiated state of "Void" before God began creating. Nothing is the larval stage of Everything.

Nothing to say? You pretty well said it all. Time for prayer and action.

Okay - busted. You guys are too smart. I love this neighborhood in cyberspace. Y'all keep me on my toes.

Perhaps you would like to include in your list the horrid acts of the legislators in VA requiring that Planned Parenthood clinics meet the same standards as hospitals... which means 19 or so of the 22 clinics in the Commonwealth will have to close... ...and poor women will have to do without....

I am afraid to even begin the rant on this one... Join me?

The Easy Bake oven works off the heat of the bulb. CFL's will not work in it.

You can still buy 100 watt bulbs at 1000bulbs.com or http://www.elightbulbs.com

Normally I wouldn't recommend a website, but if stores around you have stopped stocking them (Target and a few others around me have and a year early at that), that may be your only option.

What so irritating that this whole boondoggle is that it's about greed. Plain and simple. GE and the other majors couldn't make enough money on icans, so they pushed through legislation to make the more expensive bulbs standard.

Oh, darlin, my head was so full last night I thought it would explode. It's in there with the rant about "sustained attacks on Planned Parenthood". And, I ranted on it a few days ago.