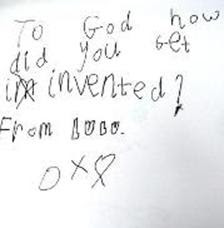 According to orthodox tradition, Holy Saturday is the day Jesus spent in hell.

Unlike Good Friday, I've always found it hard to be really sad today, mostly because I'm so busy with preparations for the Easter Feast at home and at church, but also because, well, I know how the story ends.

I mean, tonight is the Great Vigil. It takes a lot - even for this mostly mature adult - to be patient through all the readings when you know the ending is going to be so spectacular and wonderful.

There are other stories, however, stories you think are so predictable in their dreariness, that come along and surprise you, any way.

+++Rowan (you know, the Archbishop of Canterbury) has been such a disappointment on so many levels - equal rites for LGBT people, women in the episcopate, the Anglican Covenant - that it's surprisingly nice to have something positive to say about him for a change.

Damien Thompson, religious editor over at the Telegraph, UK, reported this story which first appeared in The Church Times.

Alex Renton is an atheist who sends his six-year-old daughter Lulu to a Scottish church primary school. Lulu's teachers asked her to write the following letter: “To God, How did you get invented?”


Reportedly, the Rentons were taken aback: “We had no idea that a state primary affiliated with a church would do quite so much God,” says her father. He could have told Lulu that, in his opinion, there was no God; or he could have pretended that he was a believer.

He chose to do neither, instead emailing her letter to the Scottish Episcopal Church (no reply), the Presbyterians (ditto) and the Scottish Catholics (a nice but theologically complex answer). For good measure, he also sent it to “the head of theology of the Anglican Communion, based at Lambeth Palace” – and this was the response: 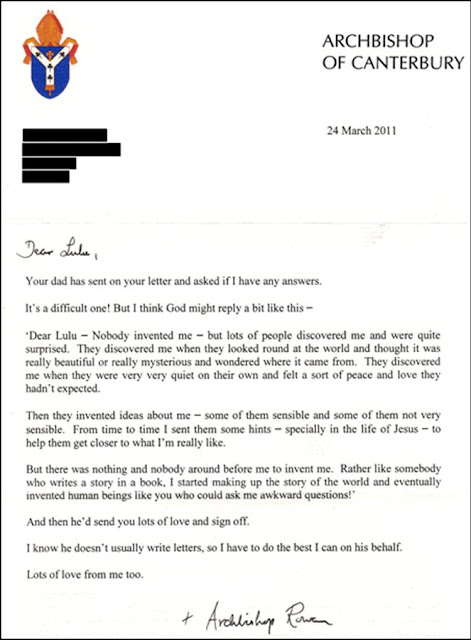 I have to give  +++Himself points for this one.

No, I'm not overly fond of the theology - I do find the play with the words "discover" vs. "invent" to set an interesting and helpful tone - but I'm sincerely impressed that the man took time to write to little Miss Lulu Renton.

"A person is never so tall as when s/he stoops to help a child."

Here's what Lulu's dad reports as her response to the Archbishop:


I found photos of him on the Internet and showed them to Lulu. She rather liked the beard. I explained a little of who he was and what he did and stood for (that would have been harder if we’d had a letter from the Pope).

She listened quietly as I read the Archbishop’s letter and it went down well. The idea of God and his story of the world worked particularly.

“Well?” I asked when we reached the end. “What do you think?”

She thought a little. “Well, I have very different ideas. But he has a good one.”

By Jove, I do believe this child has all the makings of a good Anglican.

Indeed, I suspect she just might grow up to make a really fine Anglican bishop - the Anglican Covenant and +++Rowan's bumblings not withstanding.

Won't it be great fun to wait and see how this story ultimately ends?

We live, as one of the prayers in the Book of Common Prayer says, in "sure and certain hope".
Posted by Elizabeth Kaeton at 11:42 AM

I only saw your post after I had written one myself!
http://rugbyrector.blogspot.com/2011/04/letter-from-rowan.html

I agree Great Story, where we disagree is that I am more positive about ++Rowan's contribution to the life of our church.

I ask myself the question "How would anybody else have coped with what he has had to face as ABC?" I can't think of anybody who would have done a better job, either here or in the rest of the communion.

With love and prayers for a Happy and Holy Easter.

Dearest Mark, Well, over the years I have discovered that when I frame a question like "How would anybody else have coped with what s/he has had to face . . . " I'm usually angling to justify mediocrity.

I can think of at least six other people who might have done a better job and not played ecclesiastical dodge ball with the spiritual lives and vocations of women and LGBT people. If anyone reading this is in neither of these categories, I suspect it might be difficult for you to understand.

Where we can happily agree, Mark, is that +++Himself did a perfectly fine job with this challenge. Well done, +++Rowan.

Happy Easter to you and yours, Mark.

My response to the "Lulu Letter" is here (Mimi's).

Ha! Good on, Lulu. I was really surprised, given my adult perceptions of the man, that the Archbishop wrote a kind letter and attempted a theological discussion with a child.
If only he'd be more kind and willing to have a theological discussion with adults!!
My hope for Lulu is that she will continue to raise the questions, not accept the easy answers, but also find the pieces of the puzzle in creation that say, "Isn't this an amazing thing?!" Something tells me that God delights in all that.

SCG - Well said. I think this child has the "stuff" to be an amazing Anglican - intellectually curious, not taking easy answers, still filled with the awe and wonder of creation.