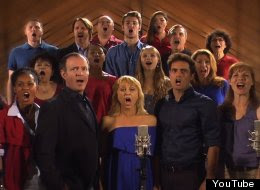 I'm offering a little something for your Saturday morning listening pleasure - this political parody of "One Day More" from Les Miserables called "One Term More!"

I've embedded it below, but just in case that doesn't work, the link is here. (This link has subtitles so you can get all the words.)

The revised lyrics include such politically-charged lines as:


"One term more, a time to celebrate democracy, repeal Republican hypocrisy...this man who would unseat Barack (is) a bleak choice at the ballot box."

"A GOP perdition-bound, a sense of right and wrong eroded. With laws that let 'em stand their ground. Republicans are locked and loaded."

"Contraception's now a sin (Screwing G.M. in the clutch). Incivility's a virtue (Homophobic out of touch). Filibusters, budget scrums (Ultrasounds and speculums). To the Dark Side they've succumbed."

The message is clear: If you're tired of hypocrisy and lies, of immoral budget proposals that take from the poor to give to the rich and compromise reproductive justice for women, storm the ballot boxes.

Not only that, help reverse the effects of voter suppression and assist others to exercise their constitutional right to vote.


"For to be free is not merely to cast off one's chains, but to live in a way that respects and enhances the freedom of others."

"... help reverse the effects of voter suppression and assist others to exercise their constitutional right to vote." You're not speaking of the United States Constitution, are you? Because the US Constitution does NOT give you the "right to vote," anywhere! Search Google for (copy/paste everything between the quotes) "Jesse Jackson Jr. HJR 28 site:democrats.com" and read about Rep. Jackson's proposed Amendment to GIVE American's the CONSTITUTIONAL "right to vote."