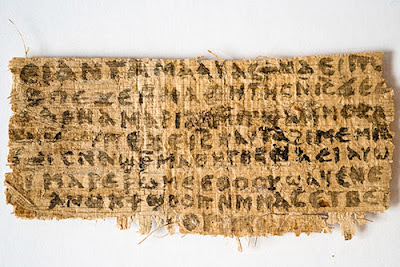 There's an interesting - and timely - juxtaposition of lessons in the lectionary for Sunday (Proper 20, Year B), especially given what's been in the religious news this past week.

A capable wife who can find?
She is far more precious than jewels.
The heart of her husband trusts in her,
and he will have no lack of gain.
She does him good, and not harm,
all the days of her life.
She seeks wool and flax,
and works with willing hands.
She is like the ships of the merchant,
she brings her food from far away.
She rises while it is still night
and provides food for her household
and tasks for her servant girls. 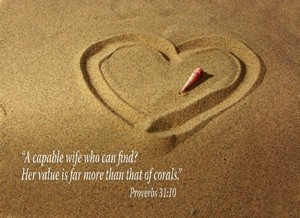 It goes on like that for a few more verses.


"What were you arguing about on the way?" But they were silent, for on the way they had argued with one another who was the greatest. He sat down, called the twelve, and said to them, "Whoever wants to be first must be last of all and servant of all."

When you compare the words from Proverbs and these words of Jesus, it could certainly sound like Jesus is saying, "If you want to be my disciple, be a capable wife.

I can't help but think of that small piece of papyrus fragment from the fourth century that was recently found on which it is written, in Sahidic Coptic,  "Jesus said to them, 'My wife....'"

That's it. Two little words 'My wife.....'. Not a whole lot to go on but tons of speculation which joins centuries of theories and even a best selling novel about what it might mean.

Here's a link to a picture of the papyrus fragment with translation from the NY Times. It reads:


not (to) me. My mother gave to me li(fe).
The disciples said to Jesus
deny. Mary is worthy of it
Jesus said to them, 'My wife'
she will be able to be my disciple
Let wicked people swell up
As for me, I will dwell with her in order to
an image. 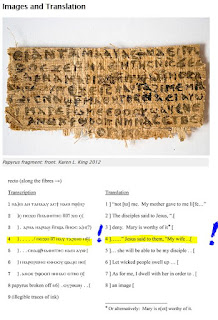 It certainly sounds like "Mary" was not only deemed "worthy" by the disciples, but Jesus judged her "able" to be a disciple and to "dwell with" Him.

I'm sure I don't know what that means.

I just want to know one thing: While that capable wife was doing all those things - seeking wool and flax.... working with willing hands.... bringing food from far away....rising while it is still night to provide food for her household - just what, exactly, was the husband doing?

Maybe writing stuff down on papyrus paper that would cause people - centuries later - to ask, "A capable wife, who can find?".

Sounds like Jesus just may have found one. And, he called her His disciple.
Posted by Elizabeth Kaeton at 8:04 AM

The capable wife, yes and this (and yes, I do know the left hand right hand "rules" of desert culture):

The Left Hand of God

Leave it to the women,
The left hand attending
To the gritty, necessary details,
While the men sit home musing,
Frightened, confused, waiting
For news of glory, missives
From the famous right hand of
God to instruct them further.
Mary and Mary bearing spices
Sought their Lord’s body
To anoint, mourn, protect,
But found an angel
Descending, opening
The tomb, to them revealing
The proof of triumph
Over death,
Sat down with them
To chat, entrusted the words
Of their Lord’s last direction
To women of faith,
Not official Apostles,
To those with wombs,
Acquainted with pain,
And the effort required
To begin life anew.

So, dear EK, my way of saying, how about enough with the nonsense about women being merely "helpmeets" as the old language described us - whole and worthy - when will our most treasured institutions really get with the plan?
peace be and be-
m

Whether or not fourth century scholars redacted or glossed over his true marital status for the emerging church’s agenda, it still stands that, by tradition, he should have been married. They never say He wasn’t married, they just omit the pertinent information.

Its simple choose how women's / wife are very precious gift to man.

Tinita - I think women are a gift to the world.

Bill - You're thesis will never hold sway in the church. It's too logical and it makes perfect sense. Where's you're sense of mystery? What about the importance of myth? Have you no decency left? ;~)