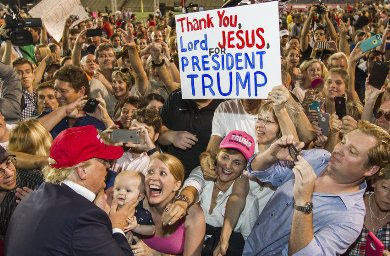 The event began, as one would expect, with a service in church. Lots of clergy saying lots of decidedly inspiring things about faith and hope and, yes, Jesus.

If you're on FaceBook, you can find a recording of that service here.

I had almost forgotten that we, on the Left, are able to speak unabashedly, unashamedly and with passion and clarly about Jesus of Nazareth - the man, the child of God, the One who is, for us, the Way, the Truth and the Light.

We are all made equally in the image of God and that, in this day and age, is a profoundly political statement.

Christ’s way of leadership is servanthood, not domination.

We believe that truth is morally central to our personal and public lives.

Jesus is the The Truth. We need to follow The Truth, not get lost following a daily pattern of lies.

Trump Evangelicals are destroying the “evangel” — the “good news” of Jesus Christ.

We are deeply concerned for the soul of our nation, but also for our churches and the integrity of our faith.

“America first” is a theological heresy for followers of Christ. 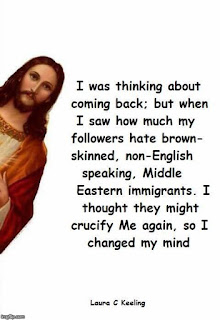 There were other - many other - inspiring, courageous statements, about rejecting misogyny and racism, heterosexism and homosexuality, tribalism and nationalism and hegemony.

It warmed my heart. I was inspired. Indeed, I am inspired.

I found myself recalling a conversation I had with a colleague this past weekend. We were lamenting the present POTUS and his Administration and expressed our mutual bewilderment over the complete capitulation of the Evangelical Christian Right to a corrupt political agenda - all in the name of Jesus.

Are they just nice people who have been duped, we wondered? Or, have they sold their soul in a Faustian bargain?

Have they momentarily lost their minds in a 'sugar high' of getting what they have always wanted, politically and culturally, even as they have sharply rebuked those of us on The Left for being political and not religious?

We recalled that when the ancient prophets looked around and saw what was wrong with the culture of their time, they laid the blame right at the feet of the priests who, they said, "Preach peace when there is no peace." Ezekiel 13:10 (And, as he added "and because, when the people build a wall, they smear it with whitewash".)

I want to repeat what I heard myself say because, well, as my colleague said, it really does need to be said. I suspect it may sound scolding to some. Well, so be it.

Truth is, I need to remember it myself, especially in those perilous times when it is so tempting to "play nice" and "pull punches" and let people have "comfortable words" instead of being inspired and instructed by the life and teachings of Jesus.

It's so much easier to whitewash a wall instead of doing the hard work of taking it down. 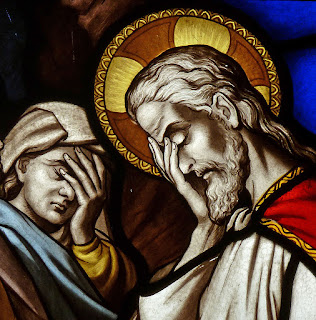 So, here's what I said. If you don't want to know, stop reading now.

Let those who need to hear, hear:

If you are an ordained Christian leader and you are not preaching Jesus from the pulpit every Sunday, then you are part of the problem of the hijacking of Jesus by the "fundgelicals".

You are part of the problem of immigrants being called "animals" and having children separated from their families as a "deterrent" to coming to this country.

You are part of the problem of people losing access to adequate health care because they've lost their insurance.

You are part of the problem of people of color - all God's children - who are not being treated with dignity and respect - indeed, some of whom have had the police called on them because a group of them are having a barbeque in a public park, or are walking in a predominantely white neighborhood.

You are part of the problem of gun violence in this country.

Because the fundgelicals are doing all of this in the name of Jesus with the authority of the most corrupt POTUS in the history of this country, the people have no other alternative to know and understand Jesus.

Leave on the pages of your personal journal your sweet metaphors and vapid stories of the insight you gained about the ocean on your vacations and the pithy quotes from other theologians you found.

Tell the people you serve how Jesus has transformed YOUR life, how you've seen Jesus transform the lives of others.

Show them your faith alive and lively.

You have a duty and an obligation - indeed, you took a vow - to feed the people you are called to serve from the abundance of God's bounty so they migh be nourished for this life and the next.

Or, trade in your stole for a pulpit gown and be an ethical, moral person in a non-Christian denomination. 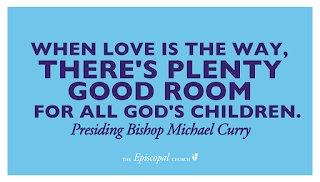 Posted by Elizabeth Kaeton at 11:00 PM

Hey, George Waite. I'm surprised that you're still trolling me. Here's what I want to say to you: You may not believe in God but God believes in you. Not only that: God loves you. And, Jesus loves you even more.

So, here's the deal: Every time you come here and leave one of your filthy comments, that's what I'm going to say to you. Every.Time. God believes in you. God loves you. And, Jesus loves you even more.

That's my story and I'm sticking to it.