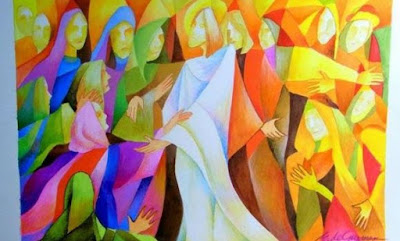 *Abraham journeyed to a new country;
Sarah went with him, journeying too.
Slaves down in Egypt fled Pharaoh's army;
Ruth left the home and people she knew.

*Mary and Joseph feared Herod's order;
Soldiers were coming! They had to flee.
Taking young Jesus, they crossed the border;
So was our Lord a young refugee.

May the words of my mouth and the meditation of all our hearts find favor in your sight, O God, our rock and our salvation.  Amen.

There is an admonition some preachers heed which is to “preach the gospel with a bible in one hand and the NY Times in the other”.

These days, I feel like the dog in the cartoon I saw recently in a humorous exchange with his fellow canine companion. He was holding his smart phone in one … um, paw … and he was wearing his Thunder shirt. He said, “These days, I can’t read the newspaper without wearing my Thunder shirt.

I am keenly aware that this weekend – and, probably next – we will be celebrating the Fourth of July. Independence Day. Since July 4th is on a Wednesday this year, some will continue the celebration straight through the week and into next weekend.

Which means, with all of the displays of fireworks, I’m going to have to have the Thunder shirts at the ready for my three pups. (Pray for us.) 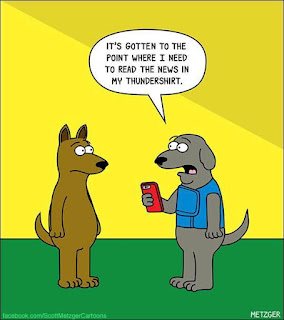 It also means that we are invited to view this morning’s lessons from scripture – especially the Gospel lesson from Mark – through the lens of our so-called “independence”.

After all, the founders of this nation were greatly influenced by the writings of philosophers who had, for centuries, expounded on the ideas of liberty and justice.

And, whether or not they were members of a Christian denomination, they were also influenced by the teachings of Jesus, who tempered all of those lofty philosophical ideas with direct acts of compassion.

In this morning’s Gospel lesson, we meet two social outcasts – an older woman who had been suffering with a hemorrhage for twelve years. It was bad enough that she was a woman and therefore inferior – never mind being unable to bear a child – but she had been bleeding for twelve years and was, therefore, considered “unclean”.

The other is a girl child who is sick unto death. She is just twelve years old and has been alive as long as this woman has not been able to conceive a child. Normally, such a child – a girl child – would not have any worth except for the dowry she might be able to fetch for her father at her betrothal.

I'm sure he loved her and I suppose it is cynical to suggest that, at age 12, she is very close to getting a return on her father’s investment for her family.

But, she is the daughter of Jarius, one of the leaders of the synagogue. I guess, “It’s not what you know, it’s who you know,” is a truth as old as time.

Jesus heals them both, of course. Not happily, it would seem. The healing of the little girl seemed something of a dare or a duty and the healing of the woman seemed to have been done serendipitously. No matter. That’s probably more a reflection of the of Mark’s storytelling than the compassion of Jesus.

I don’t know if you’ve noticed but compassion is a natural default setting for Jesus. If the choice is between healing someone or feeding the hungry or tending to those who are considered less-than or unclean or not having any value – OR the rules of the synagogue or the Levitical Codes of Torah, Jesus always leads with his heart. 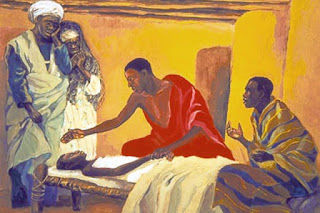 I think that’s an important lesson for us to remember in these days when the very definition of Christian as well as what it means to be American seems to be up for grabs.

I’ve been hearing folks who look at what’s going on at our southern border and decry, “That’s not who we are.”

Well, our American history has a different story to tell, doesn’t it? We have separated family right from the founding of this country with our treatment of Native Americans. We’ve done the same with African slaves.

The battle for voting rights was hard-fought and well won but voting for minorities remains under attack. I can’t believe that I have to continue to explain to well-intentioned, intelligent people that the saying “Black Lives Matter” does NOT mean that other lives don’t matter as well. Or, that “taking a knee” in silent protest is as American as the National Anthem.

It was in 1920 – only 98 years ago – that women were allowed to vote. The Equal Rights Amendment for Women still languishes in Congress, needing one more vote from one more state for ratification. And, for the life of me, I can’t believe that in the year of our Lord, 2018, we are still talking about women having access to birth control.

Okay, somebody get me a Thundershirt!

The truth of it is that we are all immigrants in this land. Everybody came here from some place else. Many of us claim our ethnic roots in the United Kingdom and places in Western Europe, others from Asia and the South Pacific, and still others from the Caribbean, South and Central America and Africa.

The only ones who are native to this land are the indigenous First People who were here when the Pilgrims landed on the Mayflower.  There’s a reason that it says on the bottom of the dollar bill. “E Pluribus Unum – Out of Many, One.”

This holiday weekend, as we talk about “life, liberty and the pursuit of happiness,” let the life, death, and resurrection of Jesus be never far from our thoughts.

As we sing, “My Country 'Tis of Thee,” let the song of our faith be always on our lips, “Christ has died. Christ is risen. Christ will come again.”

As we place our hand over our heart to salute the flag, let it beat with the compassion of Jesus.

*God, our own families came here from far lands;
We have been strangers, "aliens" too.
May we reach out and offer a welcome
As we have all been welcomed by you. 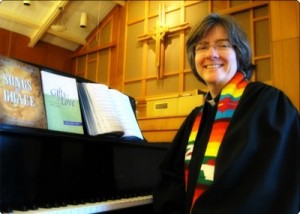 Text: Throughout the Bible, we see stories of immigrants — people called to settle in new lands and begin new lives for a variety of reasons, people who trusted in God's protection along the way. Abraham and Sarah heard God's promise of a new land. Exodus is the story of God's people being led from slavery to the freedom of the Promised Land.

Later, Ruth went with Naomi, her mother-in-law, because her love of family led her to take risks and leave the home she knew for a new home.

Jesus himself was a refugee in Egypt when his parents had to flee from Herod for his safety. Jesus taught that one of the greatest commandments is to love our neighbors; these neighbors include foreigners (Luke 10:25-37 with references to Leviticus 19:18, 33-34). He also taught that all people will be judged on their compassion for those in need and their welcome of strangers (Matthew 25:31-46).

Today, people are immigrants for many of the same reasons that these biblical people were. The Church is called to follow the Bible's teachings by welcoming and supporting immigrants today.

The hymn tune, Bunessan, is a traditional Gaelic melody that was originally associated with the 19th century Christmas carol "Child in a Manger," by Mary Macdonald. When Lachlan Macbean translated the Gaelic hymn to English, he named the melody after the small village on the Scottish island of Mull. Eleanor Farjeon wrote a new hymn to this tune, "Morning Has Broken," that was published in 1931.

This hymn is part of "In the Beginning: Genesis in Scripture, Prayer and Song", a service patterned after the Service of Lessons and Carols for Christmas and based on the stories of Genesis (Creation, Adam and Eve, Noah and his wife, Abraham and Sarah, Isaac, Esau and Jacob, Women and Joseph). This creative service is a great resource for a lay Sunday or instead of a guest preacher. http://www.carolynshymns.com/genesis_service.html

Nine more hymns to support immigrants and refugees are available at http://www.carolynshymns.com/topical_index.html#sublist_I 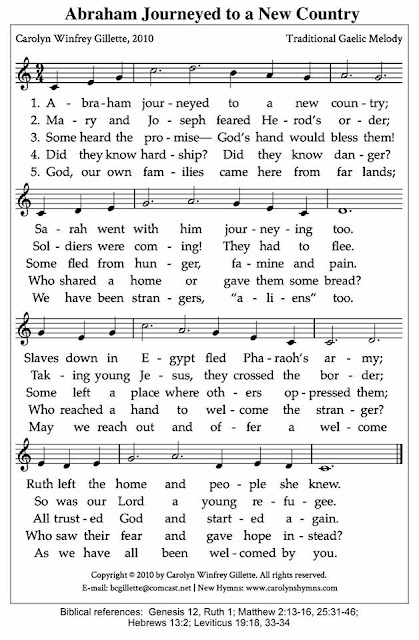