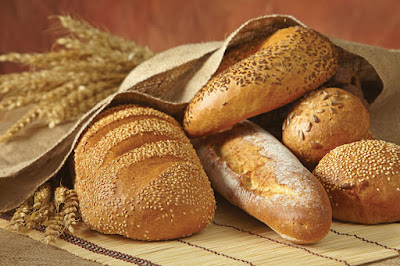 Well, I’m not as passionate as Oprah, but I do love bread. I come by it honestly. My grandmother made bread. So did my mother and aunts.

I love the smell of bread as the yeast causes it to rise in the pan. I love the “groan-whoosh” sound bread makes as it gets punched down in the pan, only to rise again.

I love the way bread feels when it comes out of the pan and onto the floured breadboard to be kneaded and pounded and patted.

I am convinced that heaven smells like bread baking in the oven.

And, I am quite sure that a bite of warm bread, crusty on the outside and soft and chewy on the inside, is, in fact, “the bread of heaven”. 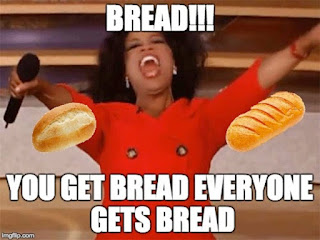 Once you’ve had real bread – not that stuff called “Wonder Bread” which only causes one to wonder how that stuff can be called bread – you just can tolerate anything but.

My grandmother loved bread so much she thought the communion wafers they served at church must be an abomination in the sight of the Lord.

My grandmother made great loaves of bread at least once a week. It never seemed to last the entire week. She made it more frequently when there were layoffs in the factory or mills or when someone in the neighborhood was sick.

I remember this one time when the factory was on strike. My whole family was involved in union organizing and this was the first test of the strength of the union.

The strike was going on for a long time – longer than anyone imagined it would (13 weeks I seem to recall) – or prepared for. People were hungry. Women and children were showing up at the picket lines, hoping to get a share of the food some were bringing to feed the men.

There were reported tensions and flashes of anger. People were making sandwiches and delivering them to the strike line, only to watch the men give their food to the wives and children.

My grandmother felt called to go and provide food for those men AND their wives and children.

So, we got up very early in the morning to load up my red Speedy wagon which I had gotten for Christmas. In went a huge vat of soup and all those loaves of bread. We covered everything with a large tarp, lashed it down with rope, and off we walked, pulling the wagon the entire six miles to the factory.

When we got to the factory we could see the men walking the picket line, their wives and children were not far away. I was only about 7 or 8 years old but I could sense the tension in the air. I moved closer to my grandmother and held her hand.

The women and children saw us and started to walk towards us, forming a tight, tense ring around us. I’ll never forget the looks on their faces – worried, anxious, hungry faces – some kept looking at the size of the pot and looking around to the size of the crowd.

We had brought a lot of food, but even I wondered whether or not there would be enough.

Just when I figured something Really Bad was going to happen, I heard my grandmother’s voice. She sounded clear and happy but firm and strong. She was asking people to form a single line.

“Get out your cups,” she said, “and don’t worry. We'll have enough. We’ll just add a little water to the soup and we’ll all eat hardy.” 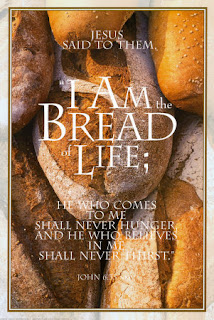 Some people slowly started to move in line, but others seemed frozen in place. Some of the men had left the picket line and had made their way over to where we were.

My grandmother’s voice rang out again, “Don’t worry. There’s plenty for everyone. Besides,” she said, motioning to me to remove the tarp, “we have BREAD!”

At that, even though this was long before game shows on TV, I did my best game show lady and whipped the tarp off the mound of bread.

I will never forget the sound that came from the crowd. It was a sigh of genuine relief, an acknowledgement of a prayer answered, the sound of gratitude mixed with anticipation of relief from the pangs of hunger.

Episcopal priest, Pauli Murray, used to say that "Hope was a song in a weary throat."

I have come to know the sound I heard that day from the people as one of the sounds of hope.

My grandmother served the soup and I broke off pieces of bread to give to the grateful hands that held it as if it were the most precious thing they had ever seen.

As each person came forward, my grandmother said, “Don’t be afraid. Jesus loves you. We’re on the right side of this fight. This is what we're asking the factory owners to do - to share a little of what they have. Don't worry. God will provide. We have to stay together. Don’t lose hope. Keep your eyes on Jesus. ”

The seed was planted in my heart right then and there so that, years later, when I heard a call to priesthood, I knew exactly what I was being called to do.

There is a line in the service of ordination to the priesthood: "In all that you do, you are to nourish Christ's people from the riches of his grace, and strengthen them to glorify God in this life and in the life to come."

Whenever I hear that line, I always remember this moment in the strike like with my grandmother.

I understood clearly this scene from John’s gospel after the feeding of the five thousand, as well as the scene from Exodus with Moses and Aaron..

The Eucharist we celebrate here is one of hope. It’s one which keeps our eyes on Jesus. It’s one in which we are fed so that we might feed those who are hungry and in need.

Jesus knew two things about the human enterprise. He knew that anxiety is at our very core. That is why whenever something is about to happen to people in the bible, when an angel appears, the first words that are spoken are, “Be not afraid.” Jesus even asks his disciples and his followers, “Why are you anxious?” And, he admonishes people several times, "Oh ye of little faith."

We are born anxious. Ever seen a baby minutes after being born? If that isn’t the very picture of anxiety I don’t know what is. And, what stops that baby from anxiety? Being held and loved. Jesus knew that. Which is why he addressed it so many times.

But, Jesus also knew that the antidote to anxiety was abundance. He talked about that all the time, too. You hear him say it in this morning’s gospel story. There’s always more than enough for everyone.

That was my grandmother’s message that morning on the strike line.

I don't know how that many people were fed that day but no one left hungry. All were fed.

That is the message of our Eucharistic celebration.

We are blessed to be a blessing.

We are fed that we may feed.

And, not just food. We are fed that we might feed the minds of children and adults with intellect and curiosity and creativity.

We are fed that we might feed the hearts of others with kindness and compassion.

We are fed that we might feed the souls of others with inspiration and light and hope. 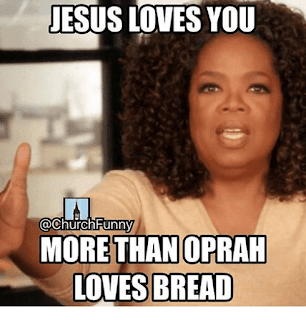 The Eucharist is the bread of joy.

It is the bread of hope.

The Eucharistic bread is the leaven in the loaves of our lives, lifting us up from our present reality and expanding our awareness to the lives of our neighbors and our world.

In it and through it, we rise!

It kneads us and plies us and stretches us to feed as we are fed.

We are fed so that we may feed others.

We are blessed to be a blessing.

Come. Jesus is waiting to bless us and feed us.