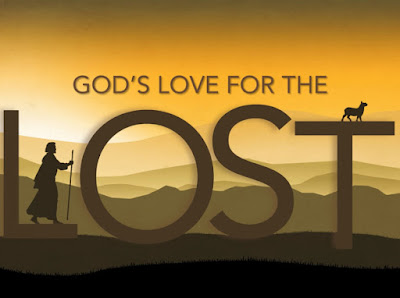 A sermon for the community of faith at
the Episcopal Church of St. Luke, Seaford, DE
Pentecost XIV - Proper 19 C
September 15, 2019

I confess that I’ve been puzzling over Luke’s gospel passage about lost sheep and lost coins for years.  I suppose part of it is that I’m a pragmatist.

Actually, make that a fairly comfortable middle class, fairly spoiled American pragmatist. Add to that one who has been raised in a culture of disposable stuff.

Although, I’m not too proud to admit that wasn’t always the case.

I confess that I am old enough to remember when milk was delivered to our doorstep in glass bottles which were placed in an aluminum-lined container with a block of ice.

And, as the oldest in a family of four, I remember helping my mother wash diapers in hot, hot water and Octagon soap (which we also used to wash the dishes, our bodies and our hair), and hanging them on the line to dry.

And, I also remember, back in the days when dinosaurs roamed the earth, that we used handkerchiefs to blow our noses and/or wipe the sweat off our brows.

Today, of course, milk comes in disposable cartons. We have different soap to wash laundry, dishes, our bodies and our hair and they each come in their own disposable plastic bottles.

And, if it's cold or flu season, you are to immediately douse your hands with disenfectant lotion which appropriately comes in plastic bottle with a plastic plunger.

So, maybe you’d search for a lost sheep, but why, in heaven's name, would you search the house for a lost coin - especially if you had nine more? I don’t know about you, but I probably have at least a dollar in spare change under my sofa cushions – along with some pieces of candy wrapped in plastic.

All that having been said, I read something this week that made me rethink this passage.

It began with an insight that I might just have gotten myself so tangled up in the weeds of Luke’s gospel story that I missed the point Jesus was trying to make.

I don’t know where you were on 9/11/01, but I was at the Seamen’s Church Institute in NYC, about 2 crosstown blocks from Ground Zero.

It’s been eighteen years, but my memories of the events of that day are still vivid.  I try to spend at least part of the anniversary of that horrific event in quiet meditation and prayer.

I came across a reflection written by a colleague who lived in Hoboken, NJ, where many people live and catch the ferry across the Hudson River to work in lower Manhattan.

My friend Laurie was in Hoboken when some of her friends and neighbors didn’t come home from work that day. For five years or so after that almost unbelievable day of tragedy, she ran a support group for survivors in the parish hall.

About three years into the group, people were still struggling with the whole range of the emotions of grief that follows a tragic and horrific loss like that, when one of their members came in looking noticeably different. She was standing tall. She was smiling. She was wearing bright colors. She was sporting an engagement ring.

The other members of the group stared at her in a mixture of disbelief and envy. What happened, they asked her. How did it happen? And, my colleague said that her answer stunned her and everyone into the group into a new, deeper level of awareness and understanding.

She said, simply, “The heart expands.” 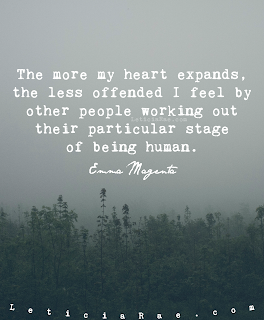 I think, sometimes, we don’t understand that about ourselves. Sometimes, in the busyness and frenetic pace of our modern lives, we place a higher priority on that which catches our immediate attention.

Immediacy becomes a higher value. Expediency becomes its own idol. “You snooze, you loose,” becomes our creed.

If it has outlived its purpose, purge it. If it breaks, toss it and get another one. If it’s lost, replace it – there’s probably a newer, improved model now.

Slowly, slowly, slowly but surely, we become numb to the fact that our hearts have begun to shrink. It becomes easy to apply the principle of disposable things to disposable people.

We’ve not become The Grinch with a heart two sizes too small, but our hearts have definitely lost the capacity to respond as they once did when we were young and the sight of a flower could delight us and unexpectedly coming upon the glory of a sunset at the end of a busy day could take our breath away.

I was telling your Sr. Warden before the service that I was almost late today. I live in Long Neck and my closest year-round neighbors include Canada geese,  white and blue heron, and, of course, seagulls. When I came out of the house on my way to the car, I looked up at the roof of one of my neighbor's house and noticed that the seagulls were all lined up on the very top of her roof.

That always makes me smile but then I noticed something I don't often see. There, perched on her chimney, was a big blue heron, looking prehistoric and regal. And then, off to the left, on the roof of the sunroom, was not one but two young blue heron.

I think my mouth opened and I gasped a bit as I watched the 'mamma' heron squak and then fly off, the two younger heron following her. They swooped round a bit and then came back to their positions, she on the chimney, the two younger ones on the roof of the sunroom.

I snapped to thinking, "OMG, I'd better get a move on or I'm going to be late for church."

But, I thought to myself, "Well, at least your heart hasn't shrunk too badly. At least you can still appreciate and admire the gift of nature. That's not a bad reason to be late for church. I don't think God would mind at all. Unfortunately, it's not God who signs the payroll check, right?"

Sometimes, I think that we forget that we are made in the image of God and, like God’s own heart, so is our heart capable of expanding.

This passage from St. Luke’s gospel is a reminder of that. God believes that every single one of God’s creatures has value and worth.

Like a shepherd leaving the 99 sheep to go searching for that one sheep that is lost, God will leave the rest to go search for us.

Like a woman of ancient Palestine, living in poverty, God will turn over the house, even in the darkness, checking under the sofa pillows, looking for one of us who has been lost, even though there are nine more coins left.

Jesus is telling us of the love that is in God’s heart and the potential we have to have the same love in our hearts because there is Jesus, standing before us, fully human and fully divine, with that same love in his heart for us.

Because of Jesus, we know we have the same capacity to expand our hearts in love for one another.

There are two phrases in the Bible that we see over and over again. The first is, “Be not afraid.” It’s something angels or messengers of God say just before something really important or really scary is about to happen.

The other is something Jesus and his evangelists who wrote the Epistles say over and over again. It is this, “Love one another.”

I think the two are not unrelated.

Jesus comes to us this morning to say that no matter how numb you have become to your own needs and those of others – I will come to you. I will find you.

I will send someone to you.

I will send you to others.

We are here for each other, to help each other along in our journey toward salvation and renewal of life.

Jesus comes to us this morning to say that no matter how numb you have become to the needs of others, not to worry. You can repent. You can turn yourself around. You can go in a different direction.

And, when you do that - when you turn yourself around till you come 'round right - there is such joy in heaven that all the hearts of all angels and archangels and all the company of heaven overflow with joy to know that you, too, have learned the truth that is in the middle of the middle of every human being: