All ecstasies and intimacies then will be with God. 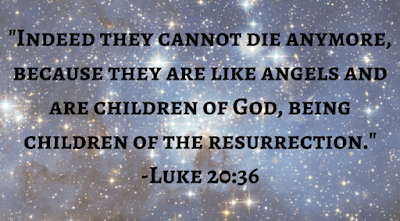 
This morning’s gospel passage from Luke is one of those times when you can almost see Jesus doing a facepalm. If you listen closely enough, you can almost hear him pray an exasperated prayer to God under his breath, “Seriously? I have to explain this to them?”

And, that’s just in the first five chapters. The miracles go on and on –feeding five thousand with 2 loaves and five fishes, healing children with seizures and a woman with an 18-year infirmity, etc., etc. All this, and yet there’s absolutely no sign of the Sadducees asking Jesus any questions about any of those miracles.

The first time they come to him, here in the 20th of 24 chapters, the Sadducees don’t ask him about anything he’s done, not any of the miracles of healing or, in fact, anything he’s said. Instead, they bring to him a hypothetical situation thinly disguised as a way to get him to say something about a theological concern of theirs about resurrection – in which, the Sadducees, unlike the Pharisees, do not believe.

So, this hypothetical situation is almost comic in its exaggeration. A woman – who was considered property in ancient Israel, simply a vehicle through which a man could produce an heir – has lost her husband to death. Torah says that the man’s brother must then care for her – with, of course, all the rights and privileges and “other benefits procured unto us by the same” which was afforded to a man in marriage (wink, wink).

The ancient understanding of the purpose of marriage is to reproduce, to sire an heir – which is the primary reason why sex was prohibited outside the bonds of marriage.

It was really all about protecting one’s property – the woman and any children she bore. The law of Moses was designed to protect the “investment” of a man’s “property” – especially since the ancient culture was not kind to widows or any other unmarried woman.

In this scenario, however, the Sadducees carried the point to the intersection of the sublime and the ridiculous. There were seven. Seven brothers, all of whom married the same woman. All seven brothers died without producing an heir. And finally, after seven husbands, the woman finally died having never produced a child.

The story reminds me of the “tests” we kids used to create for the priests and nuns of my youth. I grew up Roman Catholic and as kids, we took endless delight in asking questions that mirrored our sense of what was – to us – absurd ideas which we were carefully taught. My favorite one was this:

So, Sister, we know that God is all-powerful, right.

Yes, my child, Sister would say, not looking up from her desk (“custody of the eyes”) or continuing to clean the chalkboard (remember those?).

So, if God is all-powerful, God can do anything, right, sister?
Yes, my child, Sister would say.

So, if God is all-powerful and God can do anything, can God create a rock that he can not lift? 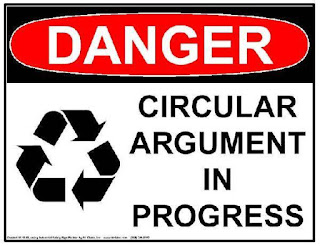 Ha! We thought we were so clever!

We practically squirmed in our seats, waiting to hear Sister stammer and sputter as she was stumped for an answer.

We forgot that Sister had been studying Jesus.

She would stop what she was doing, look kindly upon our mischievous souls and say, “Now, that is a wonderful question. Very thoughtful. Good for you. That shows you are using the old noggin’. So, what do YOU think, children? Can God create a rock that he can not lift?”

And, just like that, Sister had stolen the glee of our trickery and turned it into a class in religion. Right there, in the middle of recess or lunch break. And, the worst of it was that Sister never stopped smiling kindly. She always seemed to be secretly amused – like she knew the trick and had gotten ahead of us. I think I hated that smile most of all.

It seems to me that the Sadducees did the same thing with Jesus. What I find amusing – and, I’m sure it didn’t pass the attention of Jesus – is the subtext of what the Sadducees were asking. They place their concern about the resurrection squarely in the midst of what some religious leaders throughout the centuries have always concerned themselves.

In the exaggerated hypothetical situation of one wife for seven brothers, what the Sadducees seem most concerned about is not justice, not peace, not mercy or walking humbly with God. No, they are concerned with who has the right to claim this woman as his property. And, that, quite frankly, means, who is first in line to have sex with her in the afterlife.

You see, it’s not just The Episcopal Church that has consumed many years and many General Convention resolutions about the sex life of others. There really isn’t anything new under the sun.

Which is why I see Jesus doing a facepalm. Or, maybe that’s my projection. More likely, he was probably smiling kindly just as Sister did when we asked her about the omnipotence of God. 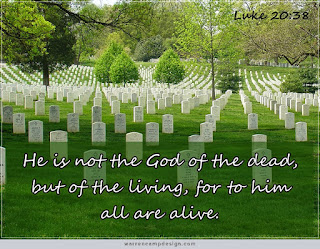 What Jesus essentially says to the Sadducees, to use Eugene Peterson’s translation in The Message, is

“Marriage is a major preoccupation here, but not there. Those who are included in the resurrection of the dead will no longer be concerned with marriage nor, of course, with death. They will have better things to think about, if you can believe it. All ecstasies and intimacies then will be with God.”

All ecstasies and intimacies then will be with God. What a brilliant way to answer their question. It’s almost as if Jesus has stolen the glee of any unintended trickery and turned it into a class in religion. Right then and right there. I suspect Jesus never stopped smiling kindly. Perhaps he even looked to be secretly amused – like he knew the trick and had gotten ahead of them.

And, sometimes, sitting with the question – prayerfully and expectantly and hopefully – will bring you an answer you never expected or anticipated, something to challenge the comfort of the status quo, something that calls you to an action you couldn’t have asked for or imagined.

You’ve probably heard the story of the woman, a harried mother of four very active children, who said, “I used to pray all the time to God for patience. ‘Give me patience, Lord,’ I would pray. And then,” she said, “God sent me four children, and I’ve been learning about patience ever since.” 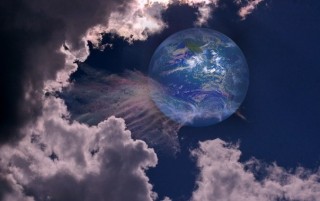 Sometimes, I wonder when we pray for peace, if what we get is war so that we will really understand and appreciate peace.

This weekend as we remember and honor our Veterans, I hope when we pray for peace we really mean it. Which means that we are willing to work to achieve it.

God knows, right now there are enough wars around the globe to make us cherish peace. There is enough gun violence in this country to have reduced some of our cities to something akin to war zones. The rise of Nationalism with its attendant racism, anti-Semitism and intolerance of immigrants has resulted in acts of violence and cruelty to men, women and children. Threats of civil war have been heard if election results are not what some want.

We honor them best by working to ensure that peace will prevail and that we will, as that song goes, “study war no more.”

Jesus tells us that God is the God of the living and the dead, for all are alive in the sight of God.

There is great comfort in that mystery.

I urge us to live through that mystery that is our faith in a God who loves us so much that we are giving the gift of free will. And, when our choices are not the best for us or others and we repent, we are given the gift of grace to seek forgiveness.

Free will and grace. These are two gifts whose generosity can’t be measured.

Because, well, God is God. 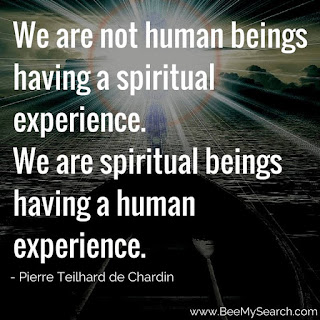 If God can do that, God can also allow us the freedom to fall short of the mark and still provide us with the means, through grace, to lift ourselves up and try again.

I find great hope and take comfort in that mystery. Because that means that nothing I can do will ever separate me from the love of God in Christ Jesus. Not even me.

And, because I believe in “the forgiveness of sins, the the resurrection of the dead and life everlasting,” I also believe that All ecstasies and intimacies then will be with God.

In the words of St. Paul in his second letter to the Thessalonians,

“Now may our Lord Jesus Christ and God our Creator, who loved us and through grace gave us eternal comfort and good hope, comfort your hearts and strengthen them in every good work and word.”