Redeemer to Cameroon - and back! 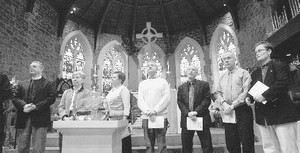 The following is an article which appeared in the Daily Record, Monday, January 29th, to report on the trip made by the seven member team from The Episcopal Church of the Redeemer, Morristown, NJ,to Bamenda, Cameroon.

The crew returned on Monday, the 5th of February, and Phillip promises to post pictures and tell stories. I'm so proud to know this church family, having once served there five years ago. They are a remarkable community of faith.


From Morris to Cameroon: a long journey
Seven hoping to bring comfort to kids orphaned by AIDS


MORRISTOWN -- Traveling from the nation of plenty, seven members of the Church of the Redeemer landed today in a poor African nation on a journey that is as much about helping as learning.

The Rev. Phillip Dana Wilson, who is traveling with the group with his wife Susan, told the congregation at Sunday's service to "send forth" those who will visit an orphanage in Bamenda, Cameroon, West Africa.

Wilson said the trip is not about guilt that comes from living in one of the "richest counties in the world"-- although that feeling could be present -- but about giving and learning.

The African trip is possible, he said, "because one part of the body is hurting."

Healing, he said, is not about going to Africa to tell the villagers how to stop the pain, but to work together to find solutions.

The seven -- Peter Arney, George Jordan, Diana Wilcox, Wayne Cresta, Lynda Wallace and the Wilsons -- left on Sunday for a weeklong trip to Cameroon. They will deliver funds collected by the church during the past holiday season, medicine, toys, books, toiletries and other gifts, and to learn about the needs for a permanent water system for the Good Shepherd Home, an orphanage for children whose parents died of AIDS. 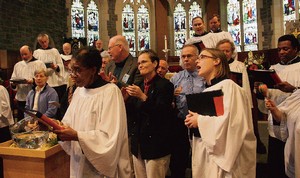 They are bringing about $3,000 for the orphanage.

The group will be in Bamenda until Saturday and will tour the Cameroon capital of Douala on Sunday.

The travelers also are scheduled to meet with Fon, or the king, of Bafu during the trip. They will return to Newark next Monday (February 5th).

They took with them not just the good wishes of their fellow church members -- who sent them forth with a rousing cheer and a standing ovation --but also with the call for prayers and concerns for the ill, the soulfully wounded, the recently dead and those in need in their congregation. 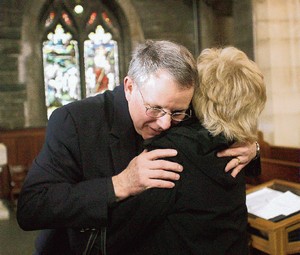 The reading of a list of those local members in need helped frame the African trip as one during which all parts of the human body could heal. Part of that healing process is baptism, Wilson said, which is not about preparing oneself for the next life, but for preparing to work to make life better on this Earth.

It also was fitting that baptism and the ritual anointing of the congregation with water took place during the ceremony -- it is the need for water that will unite the Morristown congregation and the African orphanage.

The orphanage is operated by The Benedictine Sisters of Bethany, a religious order under the leadership of the Anglican Church of Cameroon, said Sister Mary Lynne, a member of the Community of St. John Baptist of Mendham, a supporter of the Cameroon orphanage.

The sister said the need is for a water system that will not run dry in the hot seasons. The cost would be about $15,000, she said.

The children in the orphanage range in age from infants to 19, Sister Mary Lynne said. They attend school and some are doing well. Some want to be doctors, while others are taking training in auto mechanics or sewing so they can earn a living after leaving the orphanage, she said.

Cameroon is a country of 183,5560 square miles in central, western Africa. It has a population of about 16 million and an annual per capita income of $2,421. It became an independent nation in 1960 after a long history of colonization by European nations.

For Diana Wilcox, the trip "is a gift for all of us."

Wilcox said it will present her with the chance to be part of a mission that could bring the gift of life to the African children and enrich the spirit of her fellow travelers.

Wilcox said the trip comes at the end of a difficult year in which she lost her partner to breast cancer. Healing, she said, will come through learning and helping.

Wilcox said she also is planning a documentary of the trip. She recorded Sunday's ceremony and plans to shoot as much film as possible over the next week.