Arroz Doce on the Feast of Stephen 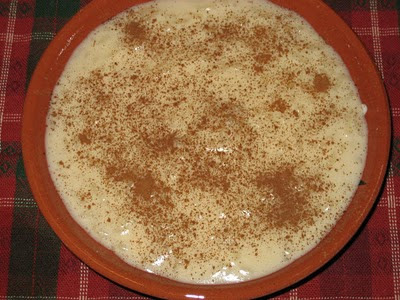 I was looking through my old (1970 version) of The Betty Crocker Cookbook that my mother bought for me as a wedding present. The one that is now all taped up with duct tape and stuffed with pieces of paper on which I've scribbled various recipes.

I was looking for the trusty, reliable chart that tells you how to cook various cuts of meat. I wanted to be certain that the Christmas Pork Loin - which had been marinating in garlic, rosemary and thyme - would be cooked to absolute perfection.

I lost my grasp of the book, and everything tumbled out onto the floor.  As I started to pick everything up - Lo! - what did my wondering eyes did I see, but my grandmother's recipe for Arroz Doce - Portuguese Sweet Rice.

For a deeply religious country like Portugal, there is no end to the opportunity to dabble in the sin of gluttony with the staggering volume of its sweets. One of them is Arroz Doce, made from Carolino rice from the alluvial plains of the Ribatejo - although, all I had was Arborio Rice. (I wouldn't use any other grain, however).

Suddenly, there was nothing to be done but to make a pot of it in honor of 'Minha avo"

I had forgotten how long one has to stand over the stove to cook it. The really wonderful thing was that I pulled up a chair as did one of our daughters and we talked and talked and talked while I stirred lazily with a wooden spoon - just as I had done when my grandmother made it.

For special occasions, she used to serve it warm, sandwiched between crackly layers of puff pastry, but I didn't have that either, so I just served it in small cups, dusted with fresh ground cinnamon and some whipped cream, sprinkled with red and green sugar.

Ms. Conroy sampled some of it - just as soon as it had cooled down to a pleasant warmth - but she mixed in some raisins. Ah, the Irish! Whatever is to be done?

It's really "Alimento dos anjo" ("Food of the Angels") when it is warm, but it can be made the day ahead and reheated on low in the microwave. Stir in a bit or milk or cream if it's too thick.


If you are going to serve this with puff pastry, crack up the oven to 400 F. line a baking sheet with parchment paper and set aside.

Lightly dust a work surface with flour and roll out the pastry to smooth it. Using a pizza cutter or sharp knife, trim the pastry into an 8x8 inch square. Cut the square crosswise and then vertically in half, so you have 4 squares. Cut each in half on the diagonal.

Space the 8 dough triangles evenly on the parchment, and bake until well risen and golden. 10-15 minutes. Transfer the triangles to a wire rack to cool.

Meanwhile, combine the rice, zest, salt and 4 cups of water in a medium saucepan. Bring to a boil, lower the heat to medium, and cook, uncovered, until almost all the water has evaporated. About 30 minutes. Adjust the heat as needed so the rice doesn't scorch.

About 5 minutes before the rice is ready, heat the milk and granulated sugar in a saucepan over medium heat, stirring occasionally, until wisps of steam curl up and the sugar has dissolved. Turn down the heat to low and keep the milk at a gentle simmer. Beat the egg yolks in a small bowl.

Once the water in the pan of rice has almost evaporated, begin adding to hot milk mixture by ladleful, stirring lazily with a wooden spoon. Keep up this rhythm of adding milk, stirring, and cooking until the rice "slumps gently when mounded" (that's the translation from my grandmother's Portuguese - isn't it cool?) and all the milk is incorporated. Remove the pan from heat.

Spoon some of the thickened rice mixture into the beaten yolks and quickly stir to incorporate. Drizzle the egg mixture back into the pan, stirring constantly. Return the pan to low heat and cook for 3 minutes. The consistency should be "lava-like" (again, my grandmother's description). Remove the lemon zest. Let the pudding cool to warm, stirring occasionally. If the rice thickens too much, add more milk, warmed over low heat.

To serve, split open the pastry triangles. Place the bottom halves on plates, spoon the pudding on top and crown with their mates. Sprinkle with confectioner's sugar and cinnamon.

Or: spoon into a small serving bowl, dust with confectioner's sugar and cinnamon and crown with a heavy dollop of whipped cream. 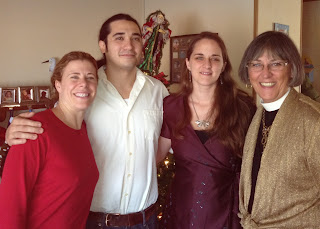 Prepare to spend at least another 30 minutes in the gym the next day but it will be sooOOoo worth it.

If Good King Wenceslas comes by, on this Feast of Stephen, you'll have something wonderful to return the favor for his once having taken his page and gone out of his way to feed that poor peasant who lived "a good league hence / Underneath the mountain / Right against the forest fence / By Saint Agnes' fountain."

And, you can sing him the last verse of "Good King Wenceslas"


In his master's steps he trod
Where the snow lay dinted
Heat was in the very sod
Which the Saint had printed
Therefore, Christian folk, be sure
Wealth or rank possessing
Ye who now will bless the poor
Shall yourselves find blessing

Merry Second Day of Christmas and Happy Feast of Stephen!
Posted by Elizabeth Kaeton at 4:26 PM

Email ThisBlogThis!Share to TwitterShare to FacebookShare to Pinterest
Labels: Recipies