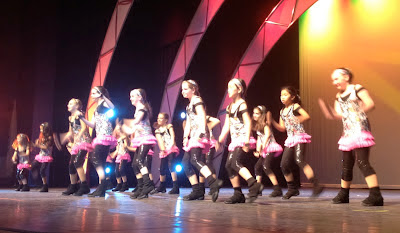 Warning: The following may prove to be so sickening sweet, it may cause nausea and/or vomiting, rot your teeth or induce a severe case of MEGO (My Eyes Glaze Over).

On Thursday night, we went drove to NJ to see our granddaughters, Mackie and Abbi, in their dance recital. Mackie is a certifiable "tween" (that's her - last one in the back row) and Abbi is in early elementary school (a video is posted below).

I'm so proud of them, I could just burst. I'm even more proud of their parents who are simply terrific and the reason our granddaughters are such amazing human beings.

Okay, so they're not perfect. They can be bratty and whiny, just like every other kid.

Or, so I've heard. I've never actually seen either one be anything other than perfect in my presence, so I have to take their parents at their word.  In my eyes, they are surpassing sublime perfection.

I've been trying to upload a video I took but Blogger is being difficult. You'll just have to know that Mackie totally rocked it out to "Move like Jagger".  The concentration on her face made me chuckle as I recalled her mother's same expression when she is focused.

Abbi had two performances. The first was a ballet version of "I Hope You Dance". Oh. My. Soul. She smiled brightly and watched the young girl who was leading her dance troop. She did so well! Like a little angel.

The second was based on Katie's Perry's "Fireworks", which she was. A firecracker that is. I loved the mischievous smile on her face. Her father smiles the same way.

I must say, being a Nana is an indescribably delicious experience.

It's a bit like peeking into a special corner of heaven.

It's like watching on rotation of the circle complete itself, even as another rotation is forming.

It's like being in a place where peace and justice meet and embrace - a truly good and right thing which warms the heart and stirs the soul.

It is exhilarating to watch facial expressions and personality traits and phrases of words come together in such as way as to know that you are kin in ways that are beyond mere bloodlines.

It is profoundly hopeful to watch past and present come together and embrace the future in this new creation.

It redeems all those moments when you knew you were the worst parent in the universe - ever - and look to your children and say, "What an incredible human being! I must have done something good."

The thing about being a Nana is that it's a real gift. You can't make it happen. There's no sense waiting around for it to happen. It's totally and completely out of your control.

But, like grace, when it comes, it's freely available and undeniably undeserved.

I don't know if I've ever been able to "move like Jagger". I certainly can't now and I'm younger than Mick Jagger. God bless him. He's still got the moves.

I don't have the moves. Never have. Well, I think I might have once, but the last time I remember moving like Jagger, I got pregnant.

I'm a Nana. I have the grandchildren.

No one will ever write a song about that. Well they might, but it won't get any radio play much less make the Top 50 and it certainly won't be danced to by young 'tweens'.

That's okay. I have the better portion.
Posted by Elizabeth Kaeton at 9:33 PM

Thank you--this Nana concurs wholeheartedly with everything you've said. An additional gift to me, as an adoptee, is seeing three generations of folks who are related to me by blood, the only people I know that I can say that about. Truly, a rich gift.

Oh how wonderful.... video please, because I really do want to see someone move like Jaggar!

Hanging on by my fingernails until in at least ten years I may become a Nana too. Meanwhile, your comment about moving like Jagger made me truly laugh out loud. Thanks!

"the last time I remember moving like Jagger, I got pregnant"

Margaret - I just can't get the video up. I'm going to try on FB.

Scoop. It's true. It's really true

JCF - Not You-Tube. Maybe FB. I'm going to give it a shot anyway.