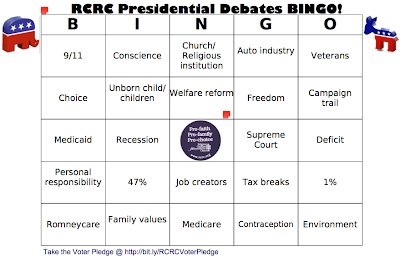 Bob Keithan, director of Public Policy, along with some of the staff at RCRC (Religious Coalition for Reproductive Choice) have developed a wickedly ingenious game to help get you through tonight's debates.

If you’re like us, you’ve probably been keeping up with the guessing game of what President Obama and Gov. Romney will say, how they’ll distill themes into bullet points, and especially what the catchphrases of the debate will be the next morning.
As we were talking in the office about those themes and catchphrases, someone suggested making it a real game… and what better game to play than bingo?! And the RCRC 2012 Presidential Debates Bingo was born.
Print out the attached cards, invite some friends over, and let the fun begin! Which candidate will be the first to use the words “values,” a form of “reproduction” or “faith”? Which candidate will be the first to say “… that’s what’s great about America”? You can play along after you’ve downloaded one of the two files: one with just two cards and one with ten cards so you can use them with a group of friends. The RCRC Pro-Faith, Pro-Family, Pro-Choice logo is your free space!
And because we want to share in the fun, we’ll be live tweeting at @rcrchoice and making regular Facebook updates to our page throughout the evening!

Print out your Bingo card (or, make one up of your own with your own favorite words or phrases, call up a few of your friends, make some snacks or desserts, chill the wine (and, if you must) beer, and have yourself a "Debate Party".

To spice it up even more, you can use quarters for the markers on your BINGO cards and donate the money to the political campaign of your choice (and, the choice is Very Clear).

Off you go, then. Have fun!

Thanks, Rob and the staff at RCRC.

Posted by Elizabeth Kaeton at 3:37 PM

backupbrain.com has a Debate Bingo-Card generator. Either click on the "Click here" link or refresh the page to get a new card.