Love among the ruins 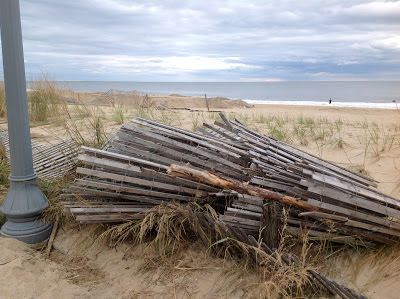 I spent some time in Rehoboth Beach proper today. I had heard the damage was "minimal" but I had to check out the Boardwalk and the beach for myself.

It's no where near as bad as the Jersey Shore or Hoboken or New York City, but Hurricane Sandy did not leave our beautiful beach unscathed. 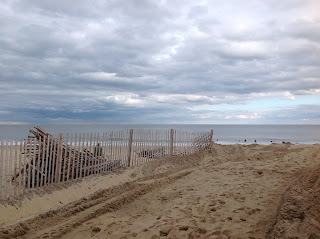 As I walked along the north end of the Boardwalk - near the Henlopen Hotel - there was evidence of clean up and recovery efforts.

Most of the sand that was on the Boardwalk has been shoveled up and moved back to the beach.

The sidewalks, however, are still pretty sandy.

Most of the beach fences are down. Ruined. Many of them bundled up in pathetic rolls and pushed off to the side, out of harm's way. 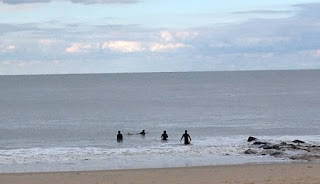 Yes, that's right. There are surfers in the water.

They are in their wet suits and on their surf boards.

Yes, the water is cold.

You don't have to be crazy to live here. You just have to have a crazy-love for the ocean.

It's the only thing that makes sense in the aftermath of this devastation. 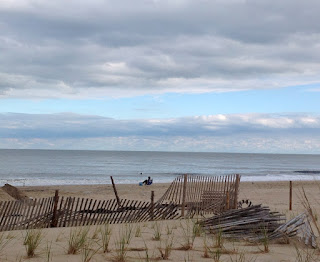 Then, there are those who have such crazy love for the ocean and the beach that they take out their beach chair, bundle up in a warm blanket, open a book, and read.

On the last day of October.

The day after Hurricane Sandy.

In the midst of all the broken fences and sand in places where God never intended it to be.

I did notice a couple of kids Trick-or-Treating on the Boardwalk, and many of the stores that had reopened were ready for them with lots of treats.

Back at home, I've been tending to the little things around here that got blown around the house. I found a garden hose container in my side yard. It may belong to one of my neighbors. It may have been washed up from someone's home across the bay. I'll put it out in my front yard and see if anyone comes by to claim it.

The water in front of the house has had some interesting things floating by. I saw a plastic cooler go by. And, a few planks of wood - none of which look like the one plank at the bottom of the stairs to the deck that was apparently blown off sometime during the storm. 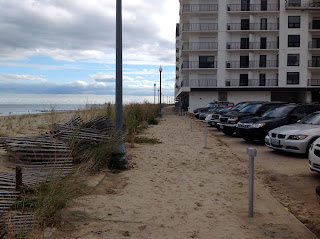 What made me laugh out loud was when I looked down and there, just under the surface of the water, was a sign that had been up near one of the houses which said,

For those of you who don't understand why that's so funny, you need to know that "No wake" doesn't have anything to do mourning and grieving and weeping in a funeral home.

"No wake" is a message to boaters to slow down so they don't create a "wake" -  the track left by a moving body (as a ship) in a fluid (as water); broadly : a track or path left.

Well, we know what Hurricane Sandy thought of that message, don't we?  "S/he" created quite a wake all on his/her own.

We'll clean up. We'll go on. By the start of the Summer Season, 2013, you'd never know anything happened here, much less a major hurricane.

It's not easy to live on the water. It just looks that way.

This is love among the ruins. To my way of thinking, it's the truest kind of love there is.

Posted by Elizabeth Kaeton at 8:08 PM

Ever so perishable
all of us
all of our "things"
made or proudly built up
as if
today many know what is important
next week many will forget
yes, dear Elizabeth
true loves loves in ruins
because it knows what matters.