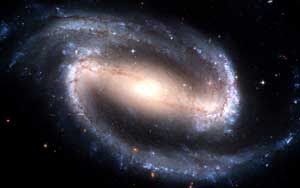 What a very rational way to begin the story of creation.

Word. Not "sound". That would have made it more mystical.

Not "OM" or "AUM" - which Hindus say is the sound at the beginning of the universe. Hindus believe that as creation began, the divine, all-encompassing consciousness took the form of the first and original vibration manifesting as sound "OM".

It's the Hindu expression of what Christians call "The Trinity".

It is a sacred sound, one that can be translated as meaning, "I am existence."  Not just creation, but that which preserves and liberates (and/or destroys) creation.

Or, in the words of John's Gospel:

Jesus, of course, is the "Word of God" who was in the beginning with God and is the light that shines in the darkness that darkness did not - can not - overcome.

The sound of the name of Jesus is a vibration of the sound of God which is Love.

That's a lot of words to describe what Incarnate Love is and what love incarnate can do.

I think the Hindus may have it right.

No rational thinking. No poetic words to describe a mystery.

Just a sound that vibrates throughout the cosmos, through human constructs of time, surpassing all human ability for reason and understanding.

It's the sound of Divine Love incarnate in humankind.

Which sounds enough like "Amen" for me to say, "May it be so."
Posted by Elizabeth Kaeton at 6:16 PM