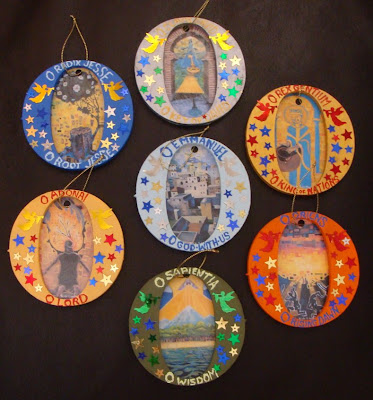 I look forward to them every year.

Even more than lighting the Advent Wreath.

Beginning December 17th, the O Antiphons are sung. One each day for 7 days, during Vespers/Evening Prayer or, if you're like me, during Compline.

They are sung immediately preceding the Magnificat. A new one each day. Right up to Christmas.

The antiphons bring us closer to the incarnational event that is Christmas. Not to worry, we are still in Advent, but our journey to the birth of Christ comes closer and closer to 'emanuel' = God with us.

The O Antiphons are each named with the prophecy of Isaiah as a backdrop, and each one calls out a name for the messiah.
The first letters of the titles taken backwards form a Latin acrostic of "Ero Cras" (Emmanuel. Rex. Oriens. Clavis. Radix. Adonai. Sapientia.) which translates to "Tomorrow, I will be there", mirroring the theme of the antiphons. (Clever, right?)

If you're not a liturgical junkie and don't know about the O Antiphons, you probably know the hymn "O Come, O Come, Emanuel". The hymn is a lyrical phrasing of the antiphons, which are best when chanted.  Of course.

If you can't chant and Latin isn't your thang, as it were, then it's perfectly acceptable to sing the appropriate verse of the hymn before saying (or singing) the Magnificat.

To be honest, this Advent has been so frenetic, the only Advent discipline I've been able to keep is chanting the O Antiphons before the Magnificat when I say Compline. Then, I put my head down on the pillow and I think I fall asleep 30 seconds later.

No, my Christmas shopping isn't done. Not all my cards are written. I haven't started baking. I did make some Ghanian Peanut Soup last night for the staff Christmas Party this afternoon. I also wanted to make bread but, well, best laid plans and all of that.

I'm not sure how it works but the O Antiphons help me to keep the focus of my anticipation on the coming of Christ, which frees me up to stay focused on today.  This day. This present. Not the presents I've yet to buy and the things I've yet to do.

It's really quite wonderful and magical the way it lowers my stress level - well, enough for me to let go and get to sleep.

If you haven't started saying the O Antiphons, I recommend it highly.

Here's today's chant of the O Antiphon "O Root of Jesse" from the Benedictine Sisters of Erie, which you can hear by clicking this link.

O Root of Jesse, standing as
protector of the people; silencing
rulers, inspiring the people to make
supplication. Come, do not delay,
deliver us.

It takes generations to build the
Christ vision in the world, just as
it took generations after Jesse to
prepare for the coming of the
Christ. It is our task to root ideas
now that will bring the next
generation to wholeness.
— Joan D. Chittister, OSB

It's never too late to have a Blessed Advent.

Posted by Elizabeth Kaeton at 7:25 AM

I did like listening to the "Wisdom" one, but I'm especially happy to have found the Peanut Soup recipe. They used to make it in my plant cafeteria and I never thought to look for a recipe.

DeanB - You are going to LOVE this recipe. One word of caution: This makes a huge vat of the stuff. Be prepared to either cut it in half or freeze some. If you freeze it, you can then make different variations - shrimp. Left over pork, chicken or turkey. Yum.