Wisdom from Jacob the Baker 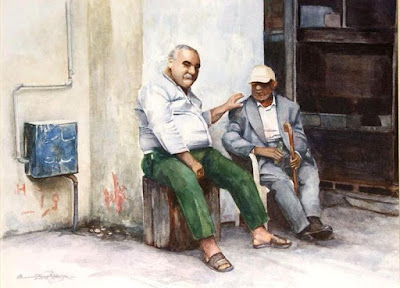 “I am sending an angel in front of you to guard you as you go
and to guide you to the place I have prepared."
The sky grew red and then began to pale to dusk. Jacob and the old man sat together shoulder to shoulder. Their manner with each other was not like men who had just met but as men who were being introduced to a friendship that had long existed but which they were just now discovering. In this way, Jacob met Joseph.
“What work do you do?” asked Joseph.
“I am a baker,” said Jacob.
Joseph laughed. “I used to be a baker,” he said, intrigued by the parallel. “But now I am afraid I am getting too old for my work.” 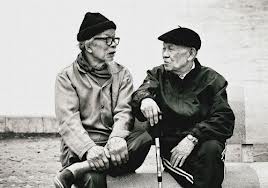 “It is written that ‘although we are not excused from the work, neither are we expected to finish it',” said Jacob.
“Yes,” said Joseph, “but what will I do with my time?”
“When we treat time as a limit,” said Jacob, then time becomes a wall, a barrier we will die climbing. If we see our days as a river,” Jacob motioned to the waters in front of them, “then we know time as a vehicle and realize we have all been born as passengers.”
“Passengers on a difficult journey,” said Joseph.
“Perhaps,” said Jacob. “But think about the story of Noah. Even in the flood of death, it is the flood that supports the ark of life.”
“And is that the lesson of Noah?” asked Joseph.
When Jacob began to speak again, his words came slowly, like a man stepping carefully from stone to stone in a different garden.
“The lesson of Noah teaches us that there comes a time in each of our lives when it is necessary to build an ark, to create a structure in which we can hide – a habit or a place or an attitude within ourselves that will shelter us – if we are to survive life’s terrible storms.”
“Yes,” said Joseph, interrupting, thinking back on the story he read as a child, “but why was Noah told to put a window in the ark? What could he see by doing this but the sadness of his fate?” 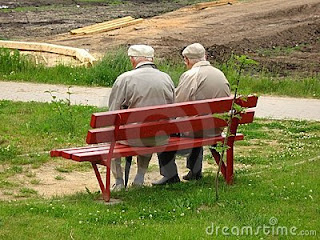 “My friend,” said Jacob, “faith sees beyond fate."
"Noah was told to put a window in the ark so he could tell when the rain had stopped, and so we can remind others who have struggled to survive that they, too, should put a window in their ark, so all of us will know when it is time to come out from behind the habit of walls we build to survive.”
“And what will we see then?” asked Joseph.
“We will see,” said Jacob, “that the world is not always filled with a flood.”
Joseph listened with his eyes while Jacob spoke; then, with a tone more plea than invitation, he asked, “Jacob, perhaps if you stay with me awhile you will turn my home into an ark.”
“If two people accept each other’s weaknesses,” said Jacob, “then their vulnerability is an ark for both of them.”
Taken from: “Jacob’s Journey: Wisdom to Find the Way, Strength to Carry On”
by Noah benShea
Posted by Elizabeth Kaeton at 3:53 PM