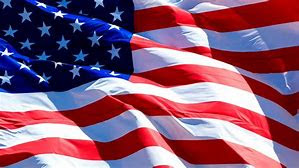 Mary and I were in Elementary School together from first grade to fifth grade. Mary's father was a truck driver and she missed him a lot. Her father was Roman Catholic but her mother was a Jehovah's Witness.

She hated that, mostly because, since her father was away a lot, she couldn't celebrate her birthday OR Flag Day. AND she had to leave the classroom whenever we said the Pledge of Allegiance.

She also could not salute a picture of the POTUS (Eisenhower, at the time), with our carton of room-temperature milk. She just stood at her desk, eyes down at her feet, carton of milk next to the graham cracker snack on her desk.

She, like me, was also first generation Portuguese American. Sometimes, we spoke Portuguese to each other on the playground. We made sure the other kids couldn't hear us, of course, but the "double deception" made us giggle.
In the summer before the 6th grade, my family moved to the suburbs to start living "The Great American Dream" in our Very Own House.

I haven't seen or heard from Mary Bothelo since.

But, I don't think I'll ever forget her or the sadness on her face when she had to leave the room every morning. I remember that when she put her hand on the doorknob, she always looked back at us. I always gave her a very small wave.

She always responded by looking tough and nodding her head slightly to acknowledge my small act of friendship.
As I think about it now, I think that made us more American than any pledge we could recite or any carton of milk we could raise to honor a President. Defiant compliance and friendship in the face of tensions between church and state.
We've always been a nation of Outsiders. Are now. Always will be.
Everyone in America came here from a different place.
We all have roots in other lands. We are all transplants.
The sooner we understand that the better we'll embody the real Spirit of America, which an unfurled flag - stars and stripes and a variety of colors coexisting together and snapping at the wind - can't even begin to capture.
flag
By Jacqueline Woodson
When the kids in my class ask why
I am not allowed to pledge to the flag
I tell them It's against my religion but don't say,
I am in the world but not of the world. This,
they would not understand.
Even though my mother's not a Jehovah's Witness,
she makes us follow their rules and
leave the classroom when the pledge is being said.
Every morning, I walk out with Gina and Alina
the two other Witnesses in my class.
Sometimes, Gina says,
Maybe we should pray for the kids inside
who don't know that God said
"No other idols before me." That our God
is a jealous God.
Gina is a true believer. Her Bible open
during reading time. But Alina and I walk through
our roles as Witnesses as though this is the part
we've been given in a play
and once offstage, we run free, sing
"America the Beautiful" and "The Star-Spangled Banner"
far away from our families—knowing every word.
Alina and I want
more than anything to walk back into our classroom
press our hands against our hearts. Say,
"I pledge allegiance . . ." loud
without our jealous God looking down on us.
Without our parents finding out.
Without our mothers' voices
in our heads saying, You are different.
Chosen.
Good.
When the pledge is over, we walk single file
back into the classroom, take our separate seats
Alina and I far away from Gina. But Gina
always looks back at us—as if to say,
I'm watching you. As if to say,
I know.
Jacqueline Woodson, "flag" from Brown Girl Dreaming. Copyright © 2014 by Jacqueline Woodson.
Source: Brown Girl Dreaming (Nancy Paulsen Books, 2014)
Posted by Elizabeth Kaeton at 12:02 PM