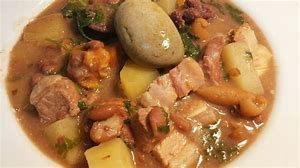 I brought home quite a few rocks from Scotland. I don't know why, really. I just did. I always do it wherever I travel. I have rocks from every country I've ever visited, all scattered here and there around the house.

I suppose that's why I dreamed last night of my grandmother making "Sopa da pedra" or "Stone Soup". Like so much of what she cooked and baked, my grandmother had a story to tell about the dish which told us something about who we are and what we believe.

I'm sure every culture has it's own version of "Stone Soup," but according to Portuguese folklore, a mendicant Franciscan friar was on pilgrimage and was passing through a small village just north of Lisbon when he was hungry but found that he had nothing to eat. He stopped by a house and knocked on the door, asking if he could borrow a pot in which he could make a delicious and filling stone soup. Curious but also devoutly religious people who understood what Jesus said about hospitality, the family invited him in.

The friar reached into his deep pocket to produce a smooth and well-cleaned stone that he promptly dropped into the boiling water in the ironclad cauldron in the fireplace.

A little while later he tasted the soup and said that it needed a touch of seasoning. So the wife brought him some salt to add, to which he suggested that maybe a little bit of chouriço or pork belly would be better. Graciously, she obliged and dropped several thick slices into the pot. Then, the friar asked if she might not have a little something to enrich the soup, such as potatoes or beans from a previous meal.

Smiling broadly at his clever game, she agreed and added a healthy portion into the bubbling water. This continued for a while, the friar tasting the soup and then the family supplying some other ingredient. Finally, the friar announced that he had indeed made a very delicious and filling soup. When the soup was done, the friar fished the stone out of the pot, washed and dried it off, and plopped it back in his pocket for the next time.

He and the family ate a delicious soup for dinner after which he told them many stories from the bible. When the family woke up in the morning, they found the friar had already gone but he had left enough soup for them to feed the poor and hungry in the village.

My grandmother said that when we ate this soup we should remember the Portuguese virtues of hospitality, generosity, and community, especially in times of crisis.

She used to end the story by holding up her hand and saying, "See? There are four fingers and a thumb. Each finger is different from the other and the thumb looks nothing like a finger. Yet," she'd say as she closed her hand, "they all belong to the same hand. And, know this: If you take one finger away, the hand does not work as well."

As she served the soup she'd always say, "Keep a stone in your pocket and you'll never go hungry," adding, "Jesus said that if we are silenced in praising God for all the wonders of creation, even the stones will cry out."

Maybe that's why I collect rocks from other countries.
Posted by Elizabeth Kaeton at 11:27 PM