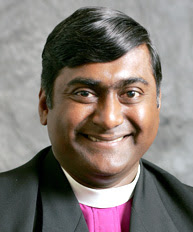 Itty, 44, issued his call during his address that was part of the convention's Eucharist. A text of his address is not yet available on the diocese's website. The diocese's communications director and others could not be reached for comment November 9 while the convention continued meeting.

The search, nomination, election and consent process for a diocesan normally takes about two years to complete. Assuming the person elected becomes bishop coadjutor, the Episcopal Church's Constitution in Article II, Section I requires Itty to resign his position no more than 36 months after the coadjutor's ordination and consecration.

Itty is the third-youngest member of the House of Bishops. He was 40 years old when he was elected May 17, 2003 to be the ninth bishop of Oregon. He received the canonically required consent to his ordination and consecration during 74th General Convention in Minneapolis in June 2003.

Prior to his election, Itty, who was born in India, was canon residentiary of the Cathedral of the Incarnation in Garden City, New York, in the Diocese of Long Island. Previously, Itty was the social justice officer for the Episcopal Church and served as the human rights officer in the Anglican Communion Office at the United Nations.

The Diocese of Oregon consists of more than 22,000 Episcopalians in 76 churches throughout Western Oregon.

What, 32 years from mandatory retirement?

Only 44 -- he has a good 20 to 25 years of ministry ahead of him, all things being equal -- which leads me to wonder if all things are indeed equal. There is more to this story than what is written in this article.