I Dream of Peace 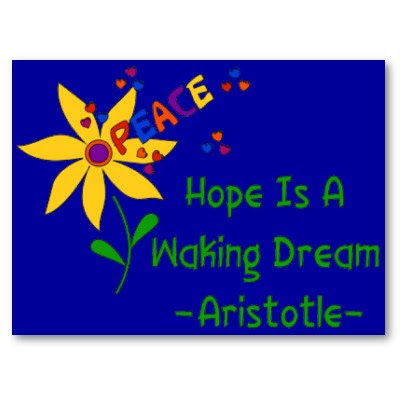 In my mind's eye, deep where memories are stored, I remember how beautiful the morning began. Crisp. Clear. Incredibly blue skies. A brilliant sun.

I remember driving down Central Avenue in Newark on my way to my office in the Diocesan Center on Mulberry Street. I remember making my way up an incline just before the Cemetary and seeing dark clouds billowing up ahead. I remember thinking there must be an incredible fire burning at one of the abandoned mills by the Passaic River.

I remember how suddenly life became a fugue. Did I turn on my radio first or did Ms. Conroy call me? Or did it happen all at once? I remember bits of information coming at me all at once. "World Trade Center." "Explosion." "Attack."

This is America. We don't get attacked! (No, we attack!)

I remembered having had a conversation with our daughter the night before. She had a late morning appointment at the World Trade Center.

I stood, slack jawed, as we all watched the smoke billowing from the first Tower. As I was trying to get my head wrapped around what my eyes were seeing, I saw it. A plane came 'round and slammed into the other Tower.

It was surreal. We all gasped in horror.

This was no dream. This was nightmare in real time.

It was real. Very real.

I remember how my stomach was in a tight knot until Julie was finally able to get through on her cell phone - around three in the afternoon - to say she was okay.

I remember feeling so grateful that she was safe that I knew I had to go into The City to help. I stayed two days, helping at the Seamen's Church Institute, a few blocks from what will forever be known as Ground Zero.

I remember the heat - intense, searing. The smell - acrid, like death. The dust and ashes - pulverized concrete, steel, human flesh and bone. The faces of the firemen, police, first responders, neighbors, and volunteers. The way they had to come in to change their boots because the rubber soles had melted.

I hear the words of a Judy Collins song - one she wrote after she visited the destruction of the city of Sarajevo.She wrote it, using the words of some of the children she saw when she was there.

Nine years have passed since that crystal clear September morning when the skies were filled with dark billows of ash and soot.

Nine years filled with the reality of "The War Against Terrorism". "Homeland Security." "The Taliban." "The Evil Axis of Power."

Soldiers at the airport, carrying large rifles. In the subway - which didn't run anymore past Chambers Street. Don't take the tunnels into The City. The bridges are probably safer. But, probably not by much.

Then began an immoral war started by a Shrub from Texas. Retaliation. Iraq. Afghanistan.

The boogey-man of our youth now become a swarthy, thin man, dressed in long robes and a cloth wrapped around his head.

We know because everyone tells us so - especially the televangelists who also tell us that all of this happened because of abortion and "the gays."

Life becomes part of the Theater of The Absurd which seems to re-open every few years with the same old tired script of hatred and ignorance and fear, but with a new cast of characters.

A "God-fearing, bible-believing Christian" man in Gainesville, Florida, feels "called by God" to call his church to burn the Qu'ran in protest of the proposed Islamic Community Center in lower Manhattan.

Nine years of being fed the Bread of Fear - risen by the yeast of greed, baked in the ovens of corruption - will do that.

But, in my mind's eye, deep where memories are stored, I also remember times of peace. When I close my eyes, I push aside the memories of the horror of terrorism and war and dream a dream of peace.

No, we will never forget. How could we?

The death toll of the three attacks - The Twin Towers in New York, the Pentagon in Arlington, VA and a field in rural Shanksville, PA - stands at 2,996 people, including the 19 hijackers. The overwhelming majority of casualties were civilians, including nationals of over 70 countries.

Can we also remember that the almost 3,000 casualties of 9/11 include approximately sixty Muslims?

If we remember all the other facts about that fateful day, nine years ago, we must also remember that.

If we conveniently forget our Muslim sisters and brothers who also died in the attacks by a radical Islamic religious sect, we diminish our own hopes for peace.

If we dream a dream of peace, we can begin to hope for it.

If we can hope for peace, we can begin to imagine it.

If we can imagine peace, be can begin to work for it.

On this ninth anniversary of an event which has left its permanent scar on our land and in our hearts, and seared itself to our memory, let us also remember peace.

Let us remember peace so we can make it our reality.

Posted by Elizabeth Kaeton at 3:06 PM

Thank you for this. Words are strangely inadequate but you managed it.