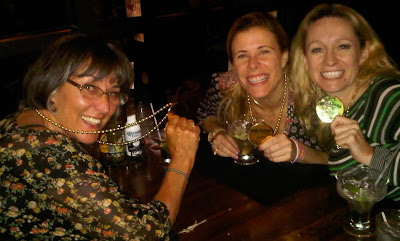 It's a great weekend here in Lower Slower Delaware. The weather is damn near perfect. The sun is shining. Temperatures are in the low to mid 70s.

It's one of those times when you could actually convince yourself that there's not a thing in the world wrong with anything. . anyone. . .anywhere in the world.

One of our daughters and her BFF are here in LSD from UES/NYC.

Just writing that makes me giggle.

It's been a grand time so far, which began with a late afternoon visit with one of her friends from high school who has a 12 week old baby. We cooed and giggled and marveled at his brilliant coo's and giggles and attempts to talk. We caught up on the people in our lives. We expressed regret and cried and then told stories and laughed and then laughed some more until it was time to leave.

Off we went, then, to dinner at Dos Locos where I had stone grilled catfish and they had chimichanga and tacos. Oh, yes, and Margaritas. Gold. When you order one at Dos Locos, you get a Gold Medal, which we're showing off in the picture above.

After dinner, we walked to the Boardwalk to check out the ocean, which was pretty rough and very windy. I was sorry we hadn't brought our sweaters. It was chilly enough that, without them, we couldn't stay very long.

I have to tell you, when we came home last night and both girls were tired enough to go to bed, I was feeling pretty good about myself. I was ready to watch a movie, but these two young women were fading.

I am woman, hear me yawn.

To be fair, these two have Very Important jobs in the Big Apple and work a gazillion hours a day/week/year. I couldn't keep up the pace they do - working 14-16 hours a day, six days per week, with intense pressure packed into almost every minute of every day to perform and produce.

Wait a minute. I used to. It's just that, I don't want to have to do that anymore. Not that I don't want to work ever again. Just not that frenetically. Crazily. Running, sometimes, on fumes. So that, when I finally stop, I crash. Like they did last night.

I'm getting ready for church. They're still asleep. I'm not going to awaken them. As my grandmother would say, "Never awaken a sleeping person. They probably need their sleep." There is no question that sleep is exactly what these two powerhouses need right now.

I have no doubt that Jesus will come to them this morning in the Little Church of the Heavenly Rest and St. Swithin's Beneath the Sheets right next door. Just not St. George's Chapel, Harbeson or All Saint's, Rehoboth Beach (Haven't yet decided which one I'll attend).

I understand Jeremiah has some comments to make this morning about the recently released Census Report on Poverty which indicates that 1 in 7 people in America are living in poverty, and asks, "Is there no balm in Gilead?"

If Amos is your lectionary choice, he's also talking about "those who trample on the needy," while the psalmist pleads with God for some relief.

Meanwhile, Paul is urging, in a letter to Timothy, for "supplications, prayers, intercessions, and thanksgivings be made for everyone, for kings and all who are in high positions, so that we may lead a quiet and peaceable life in all godliness and dignity." (He's not lying!)

Jesus has obviously read the Census Report on Poverty, and is telling stories and reminding everyone from Main Street to Wall Street that, "You cannot serve God and wealth."

Some people do, I suppose, but it's a tough balancing act. Exhausting, even. Frankly, I don't know how they do it. I used to, once, but I kept losing my balance and falling so I stopped.

Which is why I'm off to church.

I understand there is a Balm in Gilead.

I think you are having entirely too much fun in your retirement.

That's because this is not retirement. Yet. Then it will be, "Nellie, bar the door."

This? This is called 'healing'.