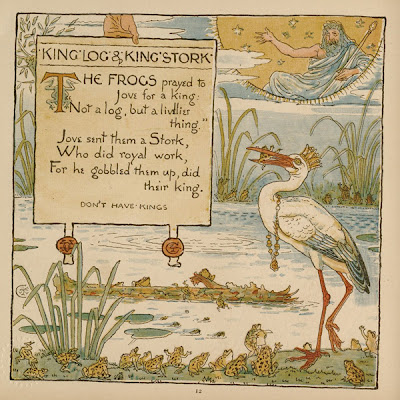 My Canadian Colleague Malcolm+ has a wonderful blog he calls Simple Massing Priest, which is, in fact, quite brilliant.

This morning, he has posted one of Aesop's fable's - "The Frogs Desired a King" - as a cautionary tale about the proposed Anglican Covenant.

I thought it so keenly brilliant that I've posted it below, with thanks to Malcolm+. If you are of a mind, it might be good to pass this one 'round to your British Anglican friends first.

The Church of England's General Synod will be meeting 22-24 November to vote on the Anglican Covenant.

Then, start passing it 'round to your friends and diocesan deputies who may be studying the Covenant in preparation for General Convention.

As Ben Franklin would say, "An ounce of prevention is worth a pound of cure."


The Frogs Desired a King
The Frogs were living as happy as could be in a marshy swamp that just suited them; they went splashing about caring for nobody and nobody troubling with them. But some of them thought that this was not right, that they should have a king and a proper constitution, so they determined to send up a petition to Jove to give them what they wanted.

"Mighty Jove," they cried, "send unto us a king that will rule over us and keep us in order."

Jove laughed at their croaking, and threw down into the swamp a huge Log, which came down - splash - to the swamp.

The Frogs were frightened out of their lives by the commotion made in their midst, and all rushed to the bank to look at the horrible monster; but after a time, seeing that it did not move, one or two of the boldest of them ventured out towards the Log, and even dared to touch it; still it did not move.

Then the greatest hero of the Frogs jumped upon the Log and commenced dancing up and down upon it, thereupon all the Frogs came and did the same; and for some time the Frogs went about their business every day without taking the slightest notice of their new King Log lying in their midst.

But this did not suit them, so they sent another petition to Jove, and said to him, "We want a real king; one that will really rule over us." Now this made Jove angry, so he sent among them a big Stork that soon set to work gobbling them all up. Then the Frogs repented when too late.

And, I shall pass on the Anglican Covenant. No, no, no, thank you. I know it says "Anglican" and "Covenant" but really, don't you think it looks and smells more like it should be labeled "Roman" and "Contract"?

Truly. Even a dollop of the stuff, I fear, shall, soon enough, become King Stork.

What was it Aesop said about this fable?

So, there it is, then: God save Archbishop Stork! Long live Archbishop Log!
Posted by Elizabeth Kaeton at 12:13 PM

I just mentioned to the Archwarden that he needs to start educating the populace about this bothersome matter, as I assume it will be discussed both at Diocesan and General Conventions.

I think the Biblical "Parable of the Trees" (Judges 9) works as well: "...then FIRE come out of the bramble, and devour the Cedars of Lebanon!" :-0

Save the Chicago-Lambeth Quadrilateral! Say "Hell No" to the Anglican Covenant!