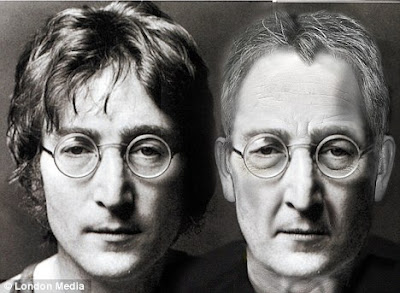 John Lennon would have turned 70 today.

What I find hard to imagine is that he's been dead for nearly 30 years.

I remember with crystal clarity hearing the news that Mark Chapman gunned him down as he was entering the Dakota, his apartment building on the Upper West Side of New York City, near Central Park.

That dark memory doesn't shadow the image of the first time I saw him on the Ed Sullivan Show when the Beatles made their American television debut.

They were four skinny kids, dressed in suits with skinny ties and what the press called "mop top" hair - like that was a bad thing.

They sang, "I wanna hold your hand," and "She loves you," and the studio audience went WILD! Young girls were screaming and fainting and falling all over each other in that inexplicable ecstatic euphoric behavior that results from a mixture of raging hormones and teenage libidinal development.

Watching them was almost as entertaining as watching four Englishmen playing guitars and drum and shaking their full "mop tops" - but not their skinny hips - as they sang "Yeah, yeah, yeah".

My father looked in disgust, harrumphed and said, "Oh, for Pete's sake! It's not like it's Frank Sinatra. At least he could sing!"

My mother said, "Well, but it's not Elvis Presley, either. That boy is trouble."

The Beatles went on to create one of the sound tracks of my life. Their music became one of the cultural icons I could share with my newly developing group of African-American friends.

We may have missed the stage where we traded Baseball cards or Cats-Eye Marbles as kids, but we could share Motown and The Beatles.

We didn't yet know the words "diversity" or "inclusion," but the musical tracks were being set for the next wave of cultural revolution in a world that was already spinning wildly - seemingly, at times, out of control.

Struggles over equal rights for women and people of color, seismic shifts in attitudes and about sexuality, reproductive rights and spirituality, and protests about our involvement in an immoral war were being played out while Sgt. Pepper's Lonely Heart's Club Band played on.

Imagine! It all seems like yesterday - when "all our troubles seem so far away". 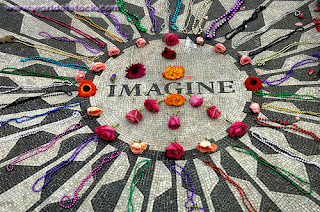 This evening, several thousand people will gather at Strawberry Fields, a 2.5 area of Central Park West, between 71st and 74th Street, that pays tribute to John - a singer, songwriter, musician and peace activist.

The iconic black and white 'Imagine' mosaic, designed by a team of artists from Naples, Italy, lies in the center of Strawberry Fields. Named after another of John's famous songs, it evokes a vision and hope for a world without strife, war and conflict.

Additionally, there is a bronze plaque that lists the more than 120 countries that planted flowers and donated money for the maintenance of the area, which more than matched Yoko Ono's initial gift of $1 Million.

Strawberry Fields is a Quiet Zone in Central Park and has been designated a Garden of Peace. I think John would have liked that.

People will gather at that spot this evening with flowers and lit candles and sing, "Imagine".

The world is still so filled with his music, it's hard to imagine he's still not with us.

Perhaps, that's because he still is - at least in spirit.

Happy Birthday, John. If I were at Strawberry Fields tonight, here's what I'd sing:

What Karen said. (gets out handkerchief)