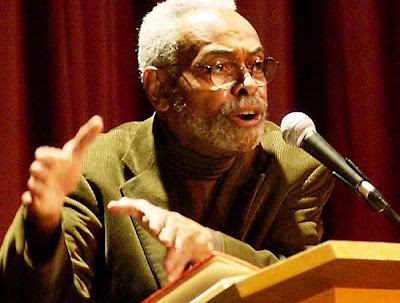 Yesterday, my dear friend Lane Denson sent me this little clip from The Writer's Almanac:

It's the birthday of Amiri Baraka, born Everett LeRoi Jones in Newark, New Jersey (1934). He has published more than 40 books of poems, essays, and plays.

He was the poet laureate of New Jersey during the September 11 attacks, and a year later, he read his poem 'Somebody Blew Up America' at a poetry festival. In it, he suggested that Israel knew about the attack beforehand; the poem was labeled anti-Semitic and caused a huge controversy.

I don't know about you, but I got a chill when I read that last sentence.

Poets are often the cultural prophets of our time and prophets often use poetry as a vehicle to communicate thoughts and ideas which are not easily carried by words.

Many poets often reflect on the social status and rage against the dominant cultural paradigm. They analyse and critique. They warn the people and threaten the principalities and powers. They cajole and inspire and promote change.

And, they are often dismissed when not the target of persecution and opposition.

Hebrew scripture is replete with examples. The Talmud recognizes 48 male prophets and seven women who are counted as prophets whose message bears relevance for all generations: Sarah, Miriam, Devorah, Hannah, Abigail, Huldah and Esther. Some Hebrew scholars also recognize Rebecca, Rachel and Leah as prophets.

One of my favorite prophets is Jeremiah who serves as a good example of what can happen to a prophet - ancient or modern.

God’s personal prediction to Jeremiah, “Attack you they will, overcome you they can’t,”(Jeremiah 1:19) was fulfilled many times in the Biblical narrative as Jeremiah warned of destruction of those who continued to refuse repentance and accept more moderate consequences.

In return for his adherence to God’s discipline and speaking God’s words, Jeremiah was attacked by his own brothers (Jeremiah 12:6) beaten and put into the stocks by a priest and false prophet (Jeremiah 20:1-4), imprisoned by the king (Jeremiah 37:18), threatened with death (Jeremiah 38:4) and thrown into a cistern by Judah’s officials (Jeremiah 38:6).

Likewise, Isaiah was told by his hearers who rejected his message, “Leave the way! Get off the path! Let us hear no more About the Holy One of Israel!”(Isaiah 30:11)

The great prophet John the Baptist was beheaded for his prophecy, and Jesus, of course, was crucified for his call to heed the prophets, resist the dominant social paradigm of power and imperialism, rebel against cultural and religious corruption, transform ourselves and the status quo, and return to unity with God.

The women of Jesus' time - his Aunt Elizabeth, his mother, Mary, and the women who followed him - Mary and Martha of Bethany, the Samaritan Woman, and the women who became the first evangelists of his resurrection - Mary, Joanna, and Magdalene - were poets and prophets of The Messiah. All of them were dismissed in their day - and for centuries - as insignificant and unimportant.

Besides Walter Brueggemann, one of my other favorite Hebrew scholars is Abraham Joshua Heschel. His book, The Prophets, sits dogeared and worn on my shelf, its margins filled with notes and exclamation points of insight.

According to Heschel, the Hebrew prophets are characterized by their experience of what he calls theotropism — God turning towards humanity.

Heschel argues that Hebrew prophets are receivers of the "Divine Pathos," of the wrath and sorrow of God over the nation that has forsaken God. He writes:


Prophecy is the voice that God has lent to the silent agony, a voice to the plundered poor, to the profane riches of the world. It is a form of living, a crossing point of God and man. God is raging in the prophet's words.

To silence the poets is often to attempt to silence God who rages against the obscenity of the certainty and avarice that brings about things such as the attack on the Twin Towers and the initiation of immoral wars of revenge and retaliation.

In commenting about Joseph and His Brothers, Brueggeman writes:

Our capacity to know and understand, to decode and analyze bewitches us. We imagine that we can see our life whole and clear, and know how to act wisely. Such a capacity for clarity seduces us into being very sure. We end up knowing exactly who we are and who God is and what God wants. It makes us sure and often strident - frequently so sure as to be destructive...We act as though we know fully, too fully, the mind of Christ. Such a neat little morality does not allow for the largeness of God's hidden way, which is more generous and more merciful than we can imagine.

Amiri Baraka may no longer be Poet Laureate of New Jersey but he is far from being silenced or silent. He rages on, not purporting to know - or have - "The Truth", but moving his listeners out of our "neat little morality" toward a larger religious imagination about "God's hidden way".

In so doing, he becomes a prophetic vehicle of what Heschel calls "theotropism" - God turning toward humanity.

And we, when we listen, also become participants in the "Divine Pathos" - which may be why some of us prefer silence.

From God's mouth to our ears via poetry.

Here - give a listen to "Somebody Blew Up America".

Posted by Elizabeth Kaeton at 2:33 PM

Yes, Who indeed!? Quite the Catalogue of Sins this. And Who is not guilty? Who is guilty?

The Profiteers, certainly, but whom amongst us can go free?