A different kind of Hosanna 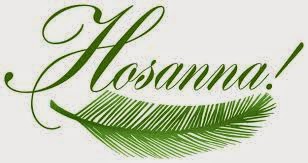 So, for the first time in - well, I can't remember when and I'm afraid to say - I'm not in "church proper" for Palm/Passion Sunday.

Rather, I'm hanging out as part of "the crowd" who are today as blissfully unaware of what's going on and being preached in the temple as there probably were when the events of this day in antiquity were unfolding.

Lemme tell ya, there's a whole lot more here than there are in church this morning. And, it's very diverse. Well, at least here in NYC. I think I heard at least six different languages spoken at breakfast.

Looking at the faces of the people here and the way they carry their bodies, it's clear to see that they know about triumph and tragedy, sin and sacrifice, betrayal and redemption, crucifixion and resurrection.

The metanarrative of the birth, life, ministry, death and resurrection of Jesus continues . . . .

. . . . . . it just doesn't speak to everyone because the church doesn't always make her voice clear and relevant and compelling enough to be heard above the clamor of life and to various people in their various social locations.

I can't imagine anyone here finding meaning in marching around outside in 25 degree weather, waving palms.

I do take great delight in listening to the squeals of joy and delight of children from a variety of countries as they frolic, carefree, in the hotel pool.

The laughter of children is a universal language all its own.

It's enough of a 'Hosanna to the Lord of Life' for me on this Sunday of Palms and Passion.

Today is for "Hosanna!" The world is already filled with too many calls to "Crucify! Crucify!"

I'll be in church for the Triduum and Easter Day. That will suffice for this year.

More people will be present, along with us, at the 3 PM matinee of WICKED than will be in church this morning in any one given location. The matinee has been sold out for weeks.

There, we'll hear another kind of story of triumph and tragedy.

And, the crowd - another full house - will come back for the regular show at 8 PM.

I wish you had been at our breakfast table conversation this morning to hear them talk about good v. evil, popular v successful, betrayal v. friendship.

And, what the 13 year old described as "the irony of the challenge of being unique v the mediocrity of being like everyone else, just thinking - and letting everyone else think - you're better."

Somebody give that Palm/Passion Day sermon an Amen.

Or, at least, a Hosanna in the highest!

In whatever way works for you.
Posted by Elizabeth Kaeton at 11:13 AM

"I can't imagine anyone here finding meaning in marching around outside in 25 degree weather, waving palms."

Much to their woe when they face their Creator and Redeemer. The Ten Commandments haven't been repealed!

HAHAHAHAHAHAHAHAHA, Oh, Michael, you are too funny. Last time I checked, there was no commandment to march around in any degree weather with Palms. HAHAHAHAHAH. You crack me up.