If you're an Episcopalian and never heard the name Malcolm Boyd, well, where have you been?

I mean, I suppose more than a few Episcopalians have been so honored, but it's not every Episcopal priest whose obituary appears in the New York Times.

I know lots of people who vie for the title - or certain variations of the same - but I think it's at least fair to say that Malcolm was the first Episcopal priest to come out as a gay man.

I don't know how I can adequately express how absolutely courageous and bold and brave that was at that time.

Important as that is, it would be unfortunate to limit Malcolm to that singular distinction.

He was a leader in the Civil Rights Movement when that was shocking to members of a church which was then more a social club and conservative political party at prayer. 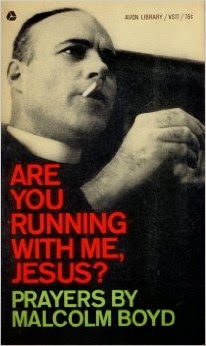 He was an author of a book of prayers titled "Are You Running With Me, Jesus?" that changed the way people thought about prayer.

These were not the graceful, eloquent, traditional prayers from the Book of Common Prayer. These were honest, raw, direct, insightful prayers whose power crept up on the reader, covering topics such as personal freedom, racial justice, and sexuality.

They were, as he wrote, “prayers for all of us today who are finding it harder and harder to pray,” which make them as relevant and timeless for us in our day and time.

Those are some "facts" about Malcolm. They certainly don't capture the essence of who he was and can't come near demonstrating the impact he has had on the church in general and The Episcopal Church in particular.

So, a personal memory to honor his spirit.


The first time I met Malcolm, he offered me a mint.

"No, thank you," I said and then, remembering that my luncheon salad had onions asked, "Oh, dear. Does my breath reek of onions?"

He sighed deeply and said, "You know, I've found that doing the work of justice requires that, from time to time, I have to use strong language. Sometimes, that language offends some people. Some people consider it vulgar. Me? I consider injustice vulgar. I curse at it with impunity. When you do that, it always surprises people when your breath smells sweet."

He looked at me with that delightful twinkle in his eyes (maybe you've been fortunate enough to see it) and said, "Onions smell sweet compared to homophobia. Want a mint?"

It was love at first mint.

I can see him now, in heaven, cursing up a storm and handing out mints.

Back here on earth, it's important to remember that we walk among giants. 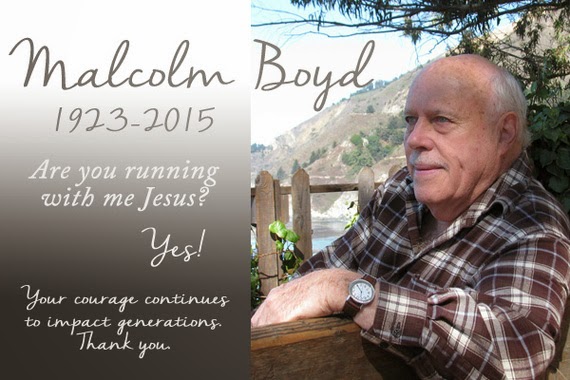 Some of us don't realize that until they have left us and leave a void.

I think Malcolm would agree that that void just leaves a space for another giant to step forward and lead yet another generation to find fresh ways to pray, and continue to raise a prophetic voice against injustice, dragging the church along kicking and screaming the whole way.

Your memory will always be a blessing.

As was your life.
Posted by Elizabeth Kaeton at 8:57 PM

Your every post dear Elizabeth is a blessing, but this in particular. Although I only met Malcolm Boyd once, I have known of him my entire life. "Are You Running With Me, Jesus" was a favorite book of my mother's and in fact she introduced me to several of his books. He did so much for the Church and for the world in his 91 years, we can all rejoice that he came our way!

Thank you, Michael. I agree that, when you came into TEC at a certain point in history, there were a few names that you just knew. Malcolm was one of them. We are blessed.

What a wonderful man his book had a profound effect on a very young me. Thanks for the blog wonderful

Don - I'm sure these small revelations - things you could never know or people you touched but didn't know while you were alive - are part of what make heaven so wonderful. Thank you.

He had a way of looking at you that felt like he could see your soul but was never invasive. Thanks Elizabeth. Let’s all eat mints today in remembrance. And be up and off to speak truth to power with our sweet breath

Amen, Ann. Amen. I often think of Malcolm when I pop a mint into my mouth.

He may have been before my time as some would say but, it seems to me that he was a wonderful man. You Reverend Kaeton are most definitely a part of my history from childhood. Thank you and I hope all is well.