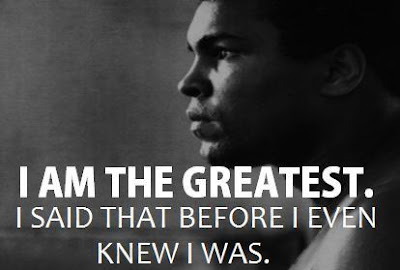 NOTE: There are times when we say 'yes' to something and can not know at the time what we are agreeing to or setting into motion. This was one of those sermons and one of those congregations. The Holy Spirit wrote this sermon. Of that, I am quite certain.

Please pray with me: And now may the words of my mouth and the meditation of all of our hearts find favor in your sight, O God, our Rock and our Redeemer.

“I am the greatest”

I think of Muhammad Ali every time I read this Gospel passage from Mark. If you think Mr. Ali was bragging, I think you missed his point. I think he was closer to the Gospel truth than might first seem to be the case.

So, Jesus and the disciples were walking from Galilee to Capernaum, and on the way, two of The Twelve got into a dispute over who was the greatest.

Now, contrary to popular thought, disputes happen in community. Of course, this community wouldn’t know anything about that, would you?

And, no one has any troubles at all, right? We all live perfect lives. No one ever gets disappointed or hurt or every feels betrayed or is critical or gets angry. Nope, not in church. We’ve got Jesus. And, God is good all the time.

Yes, of course, God IS good. And yet bad stuff still happens to good people. And, good people grow up and discover that their Christianity is not an insurance policy. As we grow and mature we learn that faith is something we live, and it gets tested from time to time. 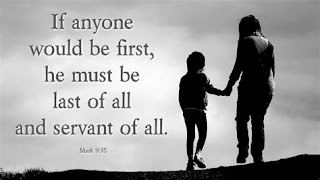 So, when disputes rise in community, what does Jesus say needs to happen?

Well, when two of The Twelve began to argue over something silly, Jesus pulled them aside and said, “Whoever wants to be first must be last of all and servant of all.”

There’s real brilliance in that statement.

What is it that settles a dispute?

Think about that for just a minute.

Humility is the antidote to arrogance.

And, arrogance is the fuel that ignites disputes.

But, it takes real humility to say, “Hmm . . . let me take a step back here. Maybe I’m not the greatest. Maybe I’m not right. Let me listen to this person and see what I might learn.”

That’s where I hear the genius of Mr. Muhammad Ali. “Float like a butterfly . . . (you say) sting like a bee,” he said. There’s real brilliance in that statement.

I've been reading about Mr. Ali and, I must say, a lot of what he has to say has real wisdom.

He also said, “I’m an ordinary man who worked hard to develop the talent I was given. I believed in myself and I believed in the goodness of others.”

And, he said, “The man who views the world the same way at fifty as he did when he was twenty has wasted thirty years of his life.”

Mr. Ali also said, “The fight is won far away from witnesses – behind the lines, in the gym, and out there on the road, long before I dance under those lights.”

He also said, “Only a man who has been defeated can reach down to the bottom of his soul and find the extra ounce of power it takes to win when the match is even.”

Some times, you have to reach way down, way into the dark crevices of your soul, before you can touch a star. That takes real humility.

Not, “Sting like a bee, float like a butterfly.” No, start with humility. Start with gentleness. Sting if and when you have to. Certainly Jesus wasn’t sweet and meek and mild all the time. When necessary, he could pull out the whips and turn over a few tables.

Start with humility. Be childlike in the trust you have in yourself and in God.

Belive in yourself. Believe in God. Believe in the goodness of others. First. That's humility. If you find otherwise, then take action. That takes humility, too.

So I want to end by telling you a story my father told me when I was young and had encountered my first experience of bitter disappointment.

My father was a very simple man, a man of few words. He only had a sixth grade education because his parents pulled him out of school to work the fields during The Great Depression. He didn’t have much but one of the things he gave me was this story.

When he was 18 years old, he was drafted into WWII and fought in the Pacific Front. He was in the Philippine Islands and, as he tells the story, one night he and six men from his battalion got cut off from the rest of the men. As night fell in the jungle, it became pitch dark. He said he couldn’t eve see his hand in front of him.

There they were, deep in the dark jungle, inching along in the darkness, bickering among themselves and cursing the wall they were sure were keeping them from returning to their battalion. Finally, exhausted, they slumped up against the wall and fell asleep.

They awoke just as the sun was starting to rise the next morning. What awakened them was the sound of voices coming from the other side of the wall. As they listened, they realized that the voices were coming from the Japanese.

They stayed quietly in place until the Japanese broke camp and moved on.

In their silence it suddenly dawned on the men that the wall they had been cursing all night was actually what had saved them.

My father said to me, “Elizabeth, sometimes – not all the time, but sometimes – things happen for a reason. Sometimes, the very thing you curse can be a blessing in your life. Sometimes, if the bad thing that happened, hadn’t happened, the good thing wouldn’t have happened, either.”

Reach down into your soul and find that extra ounce of power you need. Work hard at being you - all of who you are. Authentically. With integrity. That takes humility.

Believe in yourself and in the goodness of others. Know that sometimes – not all the time, but sometimes – things happen for a reason.

Be humble enough to look beyond your own need to find the needs of others. And then, serve those needs. That’s where greatness come from. Not from arrogance but from humility. Even the humility it takes to say that sometimes, even a wall that blocks you from doing what you want to do might have been the best thing that happened to you. 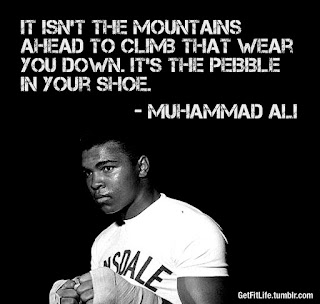 Muhammad Ali once said, “Service to others is the rent you pay for your room here on earth.”

He also said, “I am the greatest. I said that even before I knew I was. But, it’s the repetition of affirmations that leads to belief. And, once that belief becomes a deep conviction, things begin to happen.”

So, here are a few affirmations for you to consider repeating until you believe them.

My father said, “Sometimes, the very thing you curse can be a blessing in your life.”

Jesus said, ““Whoever wants to be first must be last of all and servant of all.”