Ash Wednesday: Snap Out of It!


I have two very clear but very different images for Ash Wednesday.

The first is a scene from the movie Moonstruck. Do you remember the movie? With Cher? Olympia Dukakis? Nicholas Cage?

Remember the wonderfully crazy Italian family? Cosmo and Rose Castorini and their daughter Loretta? And, Loretta had a fiancé named Johnny Cammereri but the man she really loved was his brother, Ronnie Cammereri?

How could it not be a great movie with names like that?

My favorite scene – okay, I have several of them. Like, the one where the old man got the dogs to howl at La Bella Luna.

Or, the one where Rose is talking to her daughter Loretta who returns after spending the night with Ronnie Cammereri, but Johnny Cammereri has returned home from Sicily where his mother has had a miraculous recovery. Rose says to Loretta:  “You got a love bite on your neck, Loretta! What's the matter with you? You're life's goin' down the toilet!”

Oh, and there’s Ronnie Cammereri’s philosophy of life: “Stars are perfect. Not us. We are here to ruin ourselves and to fall in love and to break our hearts.”

To which Loretta responds by slapping his face and saying, “Snap out of it.”

Okay, so the scene that reminds me most of Ash Wednesday is the one where Rose confronts her husband, Cosmo, because she knows he’s having an affair with his secretary. Cosmo is talking with Johnny Cammereri, Loretta’s fiancé but Loretta is out on a date at the Metropolitan Opera with his brother Ronnie.

Rose interrupts the conversation. “Cosmo,” she says, “I just want you to know, no matter what you do, you’re gonna die, just like everybody else."

Cosmo looks at her and you can tell he’s thinking to himself, ‘THIS is why I’m having an affair!’ and he says, “Thank you, Rose.”

And she says, “You’re welcome.”

Everyone is going to die. That’s the message of Ash Wednesday, isn’t it?

We’re to focus on the fragility and frailty of our mortality. “Dust to dust, ashes to ashes.”

That’s what I say, that’s what you hear, over and over again. It’s the message of Ash Wednesday, isn’t it? Well, it is, yes. But it’s just one part of it.

The other part of the message is one that doesn’t get much emphasis on this day in many churches. That’s because it takes a child to help us understand.

That’s where the second image I have of Ash Wednesday comes in.

It was about 10 years ago on a Shrove Tuesday night. The last pancakes had been eaten, the last dead pancake relay race had been run and while the dishes were being washed, I gathered the kids on the concrete steps of the church.

I had set up a stand on the concrete walkway with a large wok in which the kids had placed the palms they and their parents had brought in which they had saved from last Palm Sunday.

The palms were in a lazy circle in the wok but the kids were in an excited, tight line of anticipation, sitting on the steps, waiting for me to set fire to the palms which would burned and the ashes cooled and then ground into the ashes with which I would mark their foreheads the next day.

With the kids a safe distance away, they started the countdown as I lit the match and threw it on the dried palms.

WOOSH! The dried palms went up in a quick column of flame and then WOOSH! Just as quickly died down in a low flame until there was just a smolder of hot ash with sparks where there was some residue palm oil. 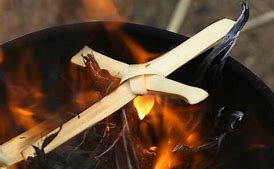 The sparks made an interesting circular sparkle among the ashes, which sparked “Oooh’s and Ahhhh’s from the peanut gallery.

One little girl, Chloe – a precocious child of five or six – gasped so loudly that every one of the other kids hushed.

“Look!” she said, “Look! Reverend Elizabeth, LOOK! There are stars in our ashes.”

And, indeed, the little sparks of palm oil twinkled in the ashes just like stars in the night sky. “I knew it,” said Chloe. “I knew it, Reverend Elizabeth. You say, ‘Dust to dust, ashes to ashes’. I knew it.”

She sat up very straight and announced, “We are star dust and we go back to star dust.”

I think both Rose and Chloe carry the real message of Ash Wednesday.

Yes, we are going to die, just like everybody else. Our mortality is fragile. Limited. We only have so much time on this earth and we don’t know how much time that is, exactly.

And, we all contain a spark of the Divine. We are marked in baptism as Christ’s own forever. Our lives are interconnected conundrums and all wrapped up in a mystery much larger than ourselves. We hurt the ones we love. We are hurt most by the ones we love.

Or, as Ronnie Cammereri says, “Stars are perfect. Not us. We are here to ruin ourselves and to fall in love and to break our hearts." 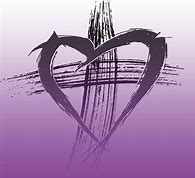 And, Ash Wednesday smacks us hard across the face and says, “Snap out of it.”

When you come to the altar to receive the imposition of ashes on your forehead, I ask you to keep those two things in mind.

Yes, we are mortal. We are not going to live forever. That’s one part of the cross.

And yes, our lives are a mystery. We are part of a Great Mystery much larger than ourselves. Because of Jesus, we are promised Life Eternal.

And that is the other part of the cross.

And, in the middle of the cross of the ashes of our mortality and the stardust of the mystery is the reality of our lives which, on this day, this day we call Ash Wednesday, we choose to live in faith and in the shadow of the cross.