We had a delightful visit with the children yesterday. The weather was absolutely perfect - a balmy 72 degrees, with the sun warming and deepening the colors of the already deep reds and yellows and oranges of the autumn leaves.

We had a purpose to our visit. We were there to give the family their flu shots. A mild winter is predicted, and the flu season promises to be fairly brutal this year. With a baby under six months old in the house, it is especially important that we ALL get immunized.

Or, at least, the drama. 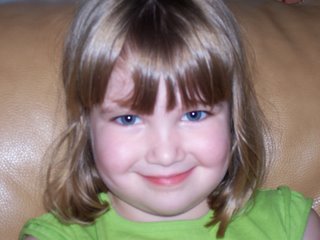 Ms. MacKenna, like most children HATES shots. Who can blame her? But, there is something extra-dramatic about a five year old who hates shots. And this five year old has quite a dramatic flair. (You can save the snide remarks about genetics for later.)

Her parents were marvelous. Simply marvelous. How did they get so smart? How are they such better parents than we were to them? Is it just possible that they learned from our mistakes? Or, are they now handing out Parenting Guides in the hospitals when babies are born?

MacKenna sat on her father's lap and held her Nana's hand. Her mother gave her a popsicle and told her to concentrate on the cold while her Grammy administered the shot (Brilliant, eh?). There was a momentary whimper with the needle stick and a bit of a gasp when the serum was injected, but that was it.

It was amazing. What a huge difference from years past!

About an hour later, and from out of The Absolute Blue, Ms. Mackey came up to her Grammy and said, "I just want to thank you for giving me the most gentle shot I ever had." She gave her a hug as her Grammy gushed and then she went back to playing with her toys - Dinosaurs, Pegasus, and her collection of Princess Barbi's. 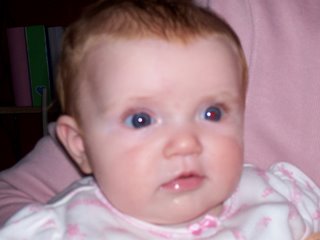 Clearly, we are all very fortunate that our Ms. Conroy is a wonderful clinician and that she is also our Parish Nurse who runs our flu clinic and that she is able to provide in-home care for our children and grandchildren.

This beauty, of course, would be Ms. Abigayle Sophie. A very miracle. An angel come straight down from heaven with red hair and pink cheeks who coos and goos and giggles.

Now, Ms. Abby has come into our lives. "Abba-dabba" as Ms. Mackey calls her. She is such a social being. Charming and delightful. Much more mellow than her sister but with an unmistakable glimmer of mischief in her eye. A wee leprechaun with red hair and sparkling blue eyes and, like her father, she has the map of Ireland all over her face.

Sometimes, you know, my heart is just so full of love, I think I might burst.

Okay - that's enough of that for now. I'm going to have to quit this. I mean, I have a reputation to maintain with the boys and girls over at the conservative blogs. They won't know what to do with this gushing grandmother/political activist who is part of the reason the Episcopal Church is going to hell in a hand basket.

But, just for now, for this one sweet moment, it is good to just be a gushing grandmother.

Thank God for the tender mercies of life which we see reflected in the faces of our children and grandchildren.

Thank God for the way God breaks open our hearts that we might love all the more.
Posted by Elizabeth Kaeton at 11:47 PM

I knew this would happen. You get your woman in the top job and now you're all reverting to (stereo)type - soppy and brooding and (eurgh) gentle.

Come on, woman! Snap out of it! There are other Goliaths to slay. Other mountains to climb. Other Red Seas to cross.

We've only just begun, together we are beautiful and other stuff.

How about the White House? In fact, I've got just the person in mind. What's your diary like for 2008 - can you free it up?

You are so mad, I adore you!