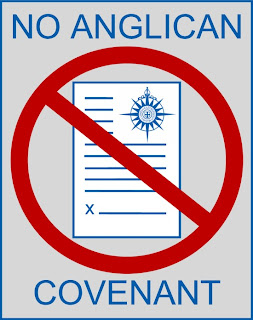 Note: I've been working with this group for about three weeks now and I must say that the energy and passion is most impressive. These are intelligent, committed, dedicated people - lay and ordained - who love Jesus and His church as it is made manifest in the Anglican Communion. Please do visit our website - it's brilliant - and, when you get to the bottom of the web page, click "join us."


LONDON - An international coalition of Anglicans has been created to campaign against the proposed Anglican Covenant. Campaigners believe the proposed Covenant constitutes unwarranted interference in the internal life of the member churches of the Anglican Communion, would narrow the acceptable range of belief and practice within Anglicanism, and would prevent further development of Anglican thought.

The Coalition's website noanglicancovenant.org will provide resources for Anglicans around the world to learn about the potential risks of the proposed Anglican Covenant.

"We believe that the majority of the clergy and laity in the Anglican Communion would not wish to endorse this document," according to the Coalition's Moderator, the Revd. Dr. Lesley Fellows, who is also the Coalition's Convenor for the Church of England. "Apart from church insiders, very few people are aware of the Covenant. We want to encourage a wider discussion and to highlight the problems the Covenant will cause."

The proposed Covenant establishes mechanisms which would have the effect of forcing member churches to conform to the demands and expectations of other churches or risk exclusion from the Communion.

Critics of the proposed Anglican Covenant, including members of the new Coalition, believe that it will fundamentally alter the nature of historic Anglicanism in several ways, including the narrowing of theological views deemed acceptable, the erosion of the freedom of the member churches to govern themselves, and the concentration of authority in the hands of a small number of bishops.

"If the Anglican Communion has a problem, this is not the solution," according to former Bishop of Worcester Peter Selby. "Whether those who originated the Covenant intended it or not, it is already, and will become even more, a basis for a litigious Communion from which some will seek to exclude others."

The launch of the No Anglican Covenant Coalition website coincides with the commemoration of the sixteenth-century theologian Richard Hooker. "Hooker taught us that God's gifts of scripture, tradition, and reason will guide us to new insights in every age," according to the Canadian priest and canon law expert, the Revd. Canon Alan Perry.

The No Anglican Covenant Coalition began in late October with a series of informal email conversations among several international Anglican bloggers concerned that the Covenant was being rushed through the approval process before most Anglicans had any opportunity to learn how the proposed new structures would affect them.

Please correct the links to noanglicancovenant.org

The link in the body of the article works - the one at the end does not - for some weird reason!

Blogged and noted over at my place! This is too important not to.