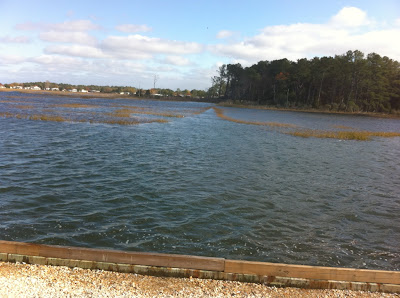 Hurricane Tomas has been bringing exceptionally high tides accompanied by very strong winds to Rehoboth Bay.  It's been awesome to watch it.

This is the view from my deck. You'll note the marsh grass is almost all under water, lapping up against the retaining wall.  In less than half an hour, the water was so high, it began to spill over into our front and side yards. 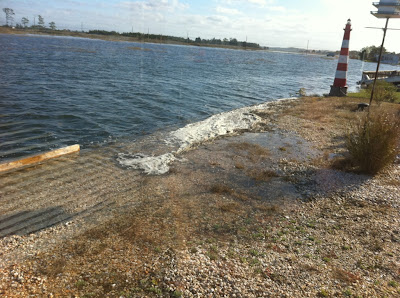 Here you can see the water starting to flood the yard. This view looks toward the South East, toward Indian River. There was some flooding on Route 24. Cars were slowing down as they tried to navigate through the rising water. 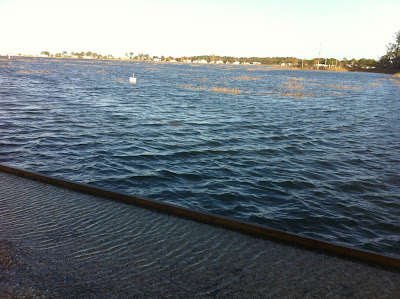 High tide. You can now see the water lapping over the retaining wall and into the yard, carrying away our gravel as the wind pushes the water into strong waves.

The odd thing was that the whole time, the sun was shining brightly. The water was behaving as if there were a storm, but the blue skies and bright sun told a different story.

The rest of my neighborhood was oblivious to the rising water and the little dramas that were happening all over the marsh. Baby ducklings were being cast out of their homes in the safety of the marsh blinds, and their mamas were trying to manage their newly discovered swimming techniques, being sorely tested in the rough surf, so they could settle into relative safety under some of the moorings in the lagoon by the side of our house.

I thought I heard a Great Blue Heron harumph as s/he flew by, her usual morning snack interrupted by the water lapping up onto the spot where I usually scatter the bread.

This happened Thursday and again on Friday.

I'm in Bradley Beach, NJ this morning, getting ready to walk down to the ocean where a group of eight Urban Interns and I will say Morning Prayer together with their two Directors, who will lead us in prayer.

It will be interesting to see what the ocean is doing further north.

After Morning Prayer, we'll come back and have some breakfast and then I've got the day to spend with them, talking about pastoral care with those who are marginalized - especially those in urban settings.

I have a wee bit of information to give them, but mostly we'll just talk about what they are seeing and hearing and where they feel powerless. They are all in their early to mid 20s. Young. Strong. Idealistic. Altruistic. Bold for Christ.

Part of learning how to do that - providing pastoral care to those who have been pushed to the margins of society - is learning how to claim your own powerlessness so that you might be able to empower others.

I don't know how it works. I only know that it does.

You know. The way prayer doesn't change anything - except you.

I think it may have something to do with the powerful gift of Easter coming only after the powerlessness of Good Friday.  And something Paul once said about God's power being perfected in our weakness.

I am keenly aware, as I begin this new day, that I am so blessed to be living on Rehoboth Bay where I get to see this played out for me right before my very eyes, day after day.

Nature provides lessons that classrooms simply can not.
Posted by Elizabeth Kaeton at 7:21 AM

The interns are privileged to get to spend this time with you today, you have the ability to make the inexplicable crystal clear. Happy I read this before heading out to EDNY Convention this morning.
lis

I think that's the key to the universe--to accept "Prayer doesn't change anything except us."

Rejoicing in our powerlessness sure gets a lot of funny looks from folks, doesn't it?