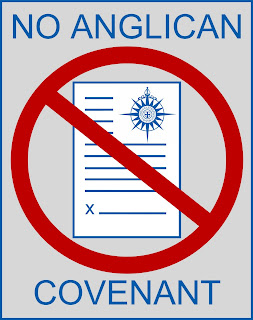 LONDON – As the Church of England General Synod prepares to debate the proposed Anglican Covenant, a group of unlikely campaigners have worked hard to ensure that there is a serious debate about the potential risks involved.

Started just three weeks ago after online conversations among a small number of international Anglican bloggers, the No Anglican Covenant Coalition has built on the work of two English groups, Inclusive Church and Modern Church, to set the shape of the debate.

“A month ago, General Synod and the entire Communion were sleepwalking into approving the Covenant without a proper discussion of the issue,” according to Coalition Moderator, the Revd. Dr. Lesley Fellows. “In some places, the Covenant was being presented as a means to punish North American Anglicans.

In Britain, the United States and Canada, it was being spun as nothing more than a dispute resolution mechanism. I’ve spoken to many Synod members who were only dimly aware of the Anglican Covenant, including one who thought we were referring to the Covenant with the Methodists.”

The week preceding the General Synod debate has seen a flood of articles criticizing the Covenant, including:


an article by Canadian canon law expert, the Revd Canon Alan Perry, challenging the assertion that the Covenant would have no impact on the constitution and canons of member churches of the Communion;

an article by the former Chancellor of the Anglican Church of Canada, the Hon. Ronald Stevenson QC, a former judge of the Court of Queen's Bench, critical of the lack of clarity regarding the disciplinary procedures in the Covenant; and

an article by the Bishop of the Convocation of American Churches in Europe, the Rt. Revd. Pierre Whalon, challenging the idea of enhancing communion by excluding those who disagree with the majority.

"We are all strongly committed to the Anglican Communion, but we are not convinced that this proposed Covenant will do anything to keep the Communion together," according to the Revd. Malcolm French, the Coalition's Canadian Convener. "Covenant supporters have hurt their case by being dismissive of critics while failing to make a compelling case for this proposed Anglican Covenant. And no one has been prepared to explain he initial and ongoing costs to implement the Covenant."

Within the last three weeks momentum has gathered to encourage the Church of England to wake up. The first test will come tomorrow, when General Synod debates the Covenant and votes on a motion for initial approval, the first step towards final approval at a later session. Although significant decisions such as women in the episcopate normally require a two-thirds majority, questions should be asked about why the English House of Bishops has proposed only a simple majority for the Covenant.

The articles referred to, and several others, can be found at:
noanglicancovenant.org/resources.html