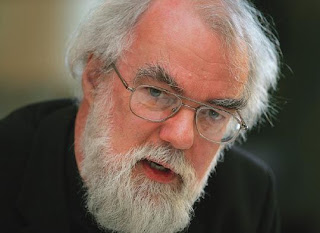 LETTER TO THE ARCHBISHOP OF CANTERBURY

Since, after more than five weeks, no response has been forthcoming from the office of the archbishop, we have decided to make the letter public. The text is reproduced below. A PDF version of the letter is available from the No Anglican Covenant Web site.

Firstly, the Covenant creates a two-or-more-tier Communion, as we know that some Provinces will not or cannot consent to it. This means that some Anglicans are 'in' the Communion, and some are less 'in'. There is no getting away from the feeling that the Covenant creates first- and second-class Christians. This in itself is unacceptable, but it also opens the door to some churches 'asking questions' about others if they perform 'controversial actions', ultimately leading to the imposition of 'relational consequences'. Hence, it favours the intolerant and the very conservative. Jim Naughton has said that the Covenant institutes "governance by hurt feelings". This seems counter to the gospel imperative of not judging others, but bearing with them and concentrating on the logs in one's own eye. A two-tier Communion does not represent unity.

Secondly, it seems unlikely that one can 'make forceful the bonds of affection'. "Where love rules, there is no will to power", Jung said. If we use force and coercion in our relationships, there is no true affection. A Covenant is made in joy at a time of trust - like a marriage. The Anglican Covenant is in reality a contract between parties where the trust has broken down. It may seem to you that this is the only way forward, but a better option is to remain a single-tier Communion, allow people to leave if they must, but keep the door open for their return. Any alternative position cedes too much power to those willing to intimidate by threatening to walk away.

Thirdly, in many countries, such as England, centralised institutions are breaking down and being replaced by networks. There is a great suspicion of hierarchical structures and rules that are enforced from above, particularly when the central authority is both physically and culturally distant. The Fresh Expressions movement is successful because it recognises this. The Anglican Communion, which is a fellowship of autonomous churches, is well placed to thrive in the challenges of this age. If we adopt the Covenant, then we will be less able to be mission-focussed in our own culture because we will be constrained by the Communion's centralised decision-making. One might say that Communion churches are on separate tectonic plates - the plates of modernism, postmodernism, and perhaps even pre-modernism. They are moving apart, and if we try to bind them together more tightly, then schism will surely occur. At this point in history, we need more flexible relationships, not a tightening of bonds.

I implore you to reconsider your support of the Anglican Covenant. I have the greatest respect for you as a person of God and for the role of Archbishop of Canterbury. However, I feel the Covenant is in a way like suicide - it is a permanent solution to a temporary problem. Moreover, it institutionalises inequality and judgementalism. In addition, I believe it will not work and will itself cause, rather than prevent, schism. Let us concentrate on things that bring us together, such as mission, worship and prayer, and let us agree to differ on issues that tear us apart, not judge who is wrong and who is right, who is 'in and who is 'out'.

Our group would very much like to begin a dialogue with you. We have the same aims of strengthening love and unity within the Communion and enabling out churches to go forward in mission, even if we have currently come to radically different conclusions about how to achieve those aims. We hope very much to hear from you.

Full disclosure: I am a member of the NACC, and I approve this message.
Posted by Elizabeth Kaeton at 11:03 PM

I agree. The Anglican Communion has done without a covenant for over 1000 years and does not need one now. Each province should be free to establish its own norms on controversial issues which other provinces should respect. I also want to see respectful dialogue on disagreements rather than this nonsense of "If I don't agree with you then we can't take communion together." That kind of bullshit has no place in a Christian community.

I agree. The Anglican Communion has done without a covenant for over 1000 years and does not need one now. Each province should be free to establish its own norms on controversial issues which other provinces should respect. I also want to see respectful dialogue on disagreements rather than this nonsense of "If I don't agree with you then we can't take communion together." That kind of bullshit has no place in a Christian community.