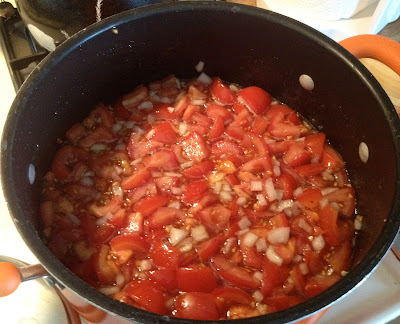 The thing about gardeners is that they are so generous.

I guess that's because we have such a generous God of Abundance.

Or, stuffed with crab meat or egg or chicken salad (with walnuts and sliced grapes - YUM!)

I prefer Delaware corn - White Silver Queen - to Jersey Corn but I gotta tell you that Delaware tomatoes just aren't the same as the ones from Jersey.

So, what to do with all these Delaware tomatoes? I mean, after you've made a few gallons of tomato sauce and tried to give some away to your co-workers, friends and relatives?

My Grandmother Tomato Jam to the rescue!

She would make up a batch of sweet stuff for the kids which was great on toast or a hot buttered roll in the morning, but she also made some wonderful stuff that was Sweet and Savory which we used the way some people use mustard or mayo on sandwiches or serve tartar sauce with fish.

Think of it as a kind of Portuguese chutney.

I've made up a batch of it this morning and thought I'd share it with you. I'm going to offer the basic recipe but you can change up the seasonings, depending on your own taste and what you're going to serve it with.

The cider vinegar is important, but you can use balsamic vinegar if you prefer a very different taste. It's important not to skin the tomatoes before you use them. Something happens to the consistency of the jam that just isn't quite right. If you can't deal with the "skins" just pull them out after you cook it. If you chop the tomatoes into coarse bits, it shouldn't be a big problem.

I love the mixture of cinnamon and ginger and cumin but I have been known to throw in a few threads of saffron (when I can afford it). You can also substitute the cinnamon for coriander or smokey paprika or jalepeno - or, use whatever combination you prefer. 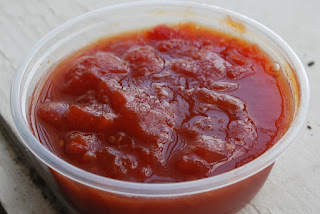 So, here's the basic recipe.

Put all ingredients into a 2-quart pot. Bring to a gentle boil then reduce heat to simmer. Cook until it thickens to a jam-like consistency.

It takes about 3 to 3 1/2 hours to cook and makes about 1/2 pint which you should store in a *sterilized* glass jar in the refrigerator. It will keep for about 2 weeks. Or, you can use a hot water caning bath like my grandmother did and it will keep seemingly forever.

It's a great accompaniment to broiled fish or scallops, but I'm also fond of it with pork or lamb.

It is. Careful with the sugar. This batch came out Very Sweet. I must have not weighed the tomatoes correctly.