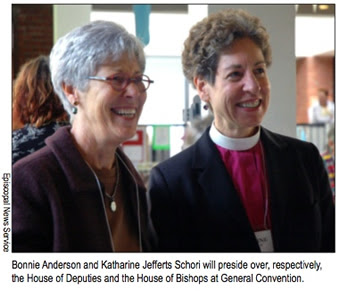 The 77th General Convention of The Episcopal Church has been adjourned sine die - without a specific date for resumption. We know the 78th GC will be in Salt Lake City, Utah, but I'm not sure of the status of the various resolutions to change the structure and/or length.

Last I heard, there was a motion on the floor to have it start and end on a weekend in order to allow more members of the laity to take less vacation time. I lost track of the vote on that one. Stay tuned.

I'm in the hotel lobby, waiting for the van to take me to the airport. I'm not nearly as brain dead as I was last night but my body is aching with exhaustion.

Needless to say, it was a very intense eight days, jam-packed-full-to-overflowing with important legislation, committee meetings, hearings, discussions, conversations, reunions and the making of new friends and allies.

Matthew Davies has written a fairly extensive "round up" of all the actions of General Convention which you can find here.

When you look over the list of accomplishments, it's really quite amazing and remarkable - especially considering that 44% of the deputies were there for the first time.

I'll have more to say in the next few days but right now, I just want to get home. With my family. To my own bed. With my own pillows. On the deck. By the water. With my herons and ducks and gulls.

For now, this blog is adjourned. Sine die.
Posted by Elizabeth Kaeton at 11:43 AM

Thanks, Elizabeth, for your service to this amazing not-dying Church. Whatever struggles and challenges we face, it is therapeutic to hear from you in contrast to that utterly ridiculous Beliefnet article. Alleluia and rest well.

Thanks for your service to our Church! Rest well and never mind that ridiculous Beliefnet article. You and so many others are living proof the author of that tripe and his supporters are living in a false alternate universe.

It was TERRIFIC to get to meet you!