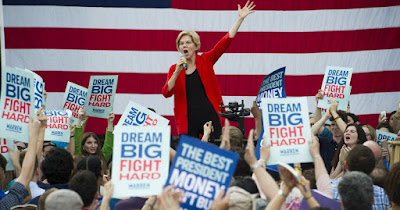 That was her campaign slogan.

So was this: "Big. Structural. Change."

And, this: "The Best President Money Can't Buy."

And, unofficially but probably best known: “I have a plan for that.” 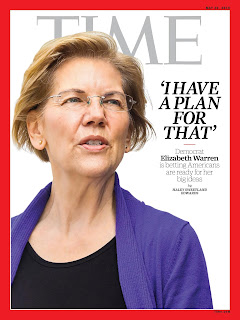 I don't think there's a woman in America who voted for Hillary Rodham Clinton who is the least bit surprised at the way Elizabeth Warren has been treated.

From the beginning, she’s clearly been one of the most experienced, intelligent, skilled, energetic/energized/ energizingly competent candidate in the running. Just as Kamala and Amy were. Just as Hillary was.

And yet, on Super Tuesday, she didn’t win either of the two New England state primaries – not even her home state of Massachusetts – and, despite a remarkably well-organized and much-admired campaign organization, she didn’t win one state.

Not even American Samoa.

What the heck happened, many of us are asking. Well, there was the matter of her policies being a little too far to the Left for many people. She did stumble and actually fell a little with the unveiling of her plan for “Medicare for All”.

She did not do well as the “female alternative to Bernie,” mostly because the “Bernie bros” organized against her, much in the same way Bernie is complaining that “the establishment” is organizing against him.

Oh, and we also found out, a month after the fact, that Bernie had been told that the Russians were working to help him win the nomination.

Of course, the Russians want him to win the nomination. They believe their Donnie-boy will be able to beat him with one hand tied behind his back because America is not ready for a "Democratic (vs Autocratic) Socialist."

When the press got wind of it and asked him about it, he, of course, came out strong, yelling and punching the air with his finger in his usual way to emphasize and underscore that he didn't want or need Putin's help.

A month later. After he had gotten substantial help. And, as Elizabeth's numbers were starting to tank.

The hypocrisy of politics is breathtaking, isn’t it?

And, didn't she just simply eviscerate Mike Bloomberg in the debates?

My, my, my. I've been dreaming about her in a debate with The Orange Toddler. You know he'd call her Pocohantas and she would open up a #17 Can of Whoop-ass right on national television. 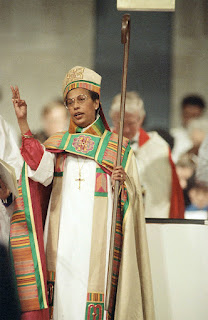 However, at the end of the day, none of the people of color and not one of the women who ran such stellar campaigns will be in the final running as the candidate for the Democrats.   It will be two old White guys – only one of whom is a Democrat – trying to oust another old White guy – a former Democrat – from the Oval Office.

The heart-breaking disappointment with Elizabeth Warren’s campaign – and all the other women running for POTUS – reminds me of the various elections for the episcopacy in The Episcopal Church when women were first in the running.

Mary Chotard Doll was the first woman to put her name in the episcopal election process in Washington, DC. She came by leadership naturally but she was also the daughter of the retired bishop of the Diocese of Maryland, Harry Lee Doll. More importantly, her mother was Delia Doll, a giant of lay leadership in the church in her own right.

Cho was excoriated in that election process. That was 1986, a few months before I was ordained. The ordination of women had been regularized for 10 years, which was considered an acceptable amount of time to have been a priest before aspiring to the episcopacy.

It was awful to watch. Through it all, Cho was calm, gracious and articulate. I don’t remember the questions she was asked – which, of course, none of the men were asked- but I remember every last one of them being cringe-worthy.

It wasn't much better, two years later in 1988, when Barbara Harris and Denise Haynes were in the running for bishop suffragan of the Diocese of Massachusetts. Both women were enormously qualified as leaders, although Barbara had only been ordained 8 years and had never been a rector.

It was understood that one woman had to take the 'hit' for the other. That turned out to be Denise. I cried with joy for Barbara but wept for Denise.

I could hear my grandmother saying, “Oh, the things we do for Jesus!”

And, there was Jane Holmes Dixon, the second woman elected to the episcopacy as bishop suffragan of DC in 1992, 4 years after Cho's painful defeat. The rhetoric around her campaign was hateful and awful. Indeed, the rector of one Anglo-Catholic church in DC sat in the back pew, reading the Sunday edition of the Washington Post when she came for her first visitation. No one set up the altar for her.

Then came Mary Adelia Rosemond McLeod, the first woman to be bishop diocesan (VT) but she had previously been in no less than 4 elections and had been absolutely ravaged.

You will also notice a pattern here: There were two women elected bishop suffragan before there was a woman elected bishop diocesan. It makes me wonder how many women will have to prove themselves as VEEP before being seriously considered capable of being what used to be known, before 2106, as The Leader of the Free World.

It is awful to see what has happeneded and is still happening to Elizabeth. And, not too many women in this country are at all surprised.

Sad, but not surprised. At all. 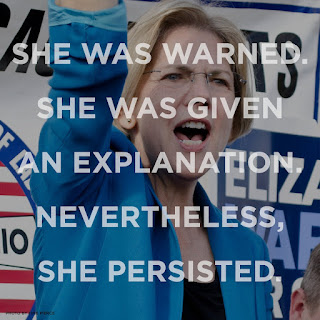 I have no doubt that, before this week is out, Elizabeth Warren - and please, guys (and I mean that in the male sense) - her name is Elizabeth, not Liz.  You don't know her well enough to give her a nickname or term of endearment or understand that she doesn't want or need one that will be a diminutive of her full name - will announce that she has "suspended her campaign".

She will undoubtedly be rewarded with a place on the Biden cabinet. Just as President Obama did with Hillary Rodham Clinton.

Because, a woman's place is in the House - the White House.