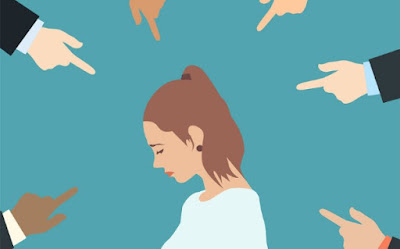 Well, I don’t know about where you live, but these sure are crazy days, here at Llangollen, our wee cottage on the sparkling marshes of the beautiful Bay of Rehoboth on the Big Waters of The Atlantic.

I don’t know about you, but it seems to me as though these past few weeks – in some cases, days! – someone has taken a chisel to whatever it was that gave shape to “normal life” and carved out something that looks nothing like its former self.

A skeleton. A shadow. Unrecognizable in some places. Hauntingly empty in others.

I’ll have this thought and then, by the time it passes from my brain to my mouth, I’ve already realized that it is no longer possible. 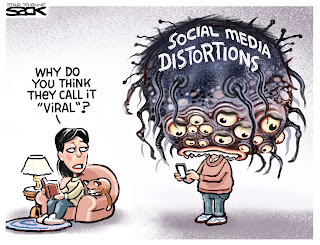 I think, “Oh, where will we go for lunch after chur . . . . “ and even before I’ve finished the sentence, I realize that there are no restaurants open for dining.

And, I’m sure as heck not going to get my poached eggs on toast with a side of turkey bacon and a a container of fruit in a Styrofoam container to eat in my car.

I think, “I wonder what movie is playing at the Midway . . .” and then I realize that’s no longer an option. Neither is taking a walk on the boardwalk and listening to the ocean.

And, just like that, “normal daily life” has changed, much of it replaced by a sense of confusion and free-floating anxiety.

Life as we used to know it has changed and, it seems, people with it. Or, at least, what we thought to be true about our fellow human beings.

The shelves at my local grocery store look like, as one of my neighbors said, "Dresden after the war". Row after row of what used to hold necessary luxuries like toilet paper and paper towels, bread and rolls, peanut butter and jelly, and mayonnaise – MAYONNAISE!!?? Yes, mayonnaise -  stand as witnesses to what sociologists call “panic buying”.

Even the meat and fish section is running on almost empty. When I went to purchase some fish for dinner, I watched the clerk wash his hands between each customer. When it was my turn, I jokingly said, “I see they’ve taught you all about washing your hands.”

“Yes,” he said, “and next week we’re going to learn our colors and then they’re going to teach us shapes.”

Thank God some of us have not lost our sense of humor.

Experts say that this “panic buying” makes us feel more powerful. It is said that we may not have control over our lives, but we take a measure of comfort in that at least we have our ‘stuff’. 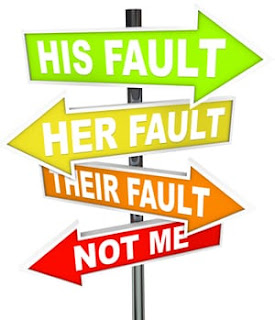 We’re also seeing a lot of “shame and blame”. It often happens when anxiety is high and times are uncertain.  It can happen in the best of families.

Adam and Eve in the Garden? Remember when they tried to blame each other when God discovered that they had done exactly what God asked them not to do? They were afraid of what was to come.

And so, Adam blamed Eve. And then, Eve blamed the snake. It’s so thoroughly human, if it weren’t tragic it would be hilarious.

The story of the healing of the man born blind is a classic example of shame and blame. We cannot get our heads wrapped around a tragedy like being born blind so, to the way of some human thinking, there has to be someone at fault.

The disciples want to know, was it the man himself who sinned or was it his parents who sinned that this poor soul was born blind?

Which are ridiculous questions, on the face of it. It assumes a power to completely destroy that which God has made. In so doing, it assumes that the power of human sin is greater than the power of God’s goodness inherent in the order of creation.

Which is why Jesus takes back the power and says, “No, actually, you just aren’t that powerful.”

Actually, Jesus says, “Neither this man nor his parents sinned; he was born blind so that God’s works might be revealed in him.”

Jesus is not allowing the power of shame and blame to claim the power for the man’s blindness. Rather, Jesus is saying something that was so radically different from what the disciples had been taught was true that it was earth-shaking and earthmoving and one of them said to the other "Write that down. We have to remember that."

Jesus is saying that the power of creation rests in the hands of the one who is the Creator of the universe. And that sometimes, randomly, bad things happen to good people, but that doesn’t mean anyone sinned and this is punishment for sin.

But, it’s true: There are none so blind as those who refuse to see.

So, Jesus does the next best thing. He took two ‘unclean things” – his spit and the dirt of the earth – and put them like a healing salve on the man’s eyes. Jesus does not need either spit or dirt to restore the man’s sight. But, by using them, he was making a point, I think, about that which God has created which humankind has diminished in value. Jesus uses both spit and dirt as vehicles of miraculous healing.

In so doing, Jesus illustrates that the power of God to create and restore and heal is greater than any human failure or sin to limit or destroy.

I've been asked by several people if I thought that God sent this pandemic to get our attention, or to punish us for (insert the sin of your choice) or to thwart the current administration.

No. No, actually, I don't God creates bad stuff to send our way to teach us lessons.

I think God ALLOWS catastrophes and calamities as opportunities for us to discover more deeply the commandment of Jesus to "love one another as I have loved you." 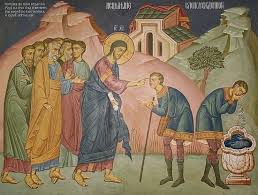 The words of author Brené Brown strike a deep cord with me. She wrote:

This pandemic experience is a massive experiment in collective vulnerability. We can be our worst selves when we’re afraid, or our very best, bravest selves. In the context of fear and vulnerability, there is often very little in between because when we are uncertain and afraid our default is self-protection. We don’t have to be scary when we’re scared. Let’s choose awkward, brave and kind. And let’s choose each other.

In this time of uncertainty, let us be certain of God’s love for us and God’s presence with us. In this time of fear and anxiety and the impulse to shame and blame, let us choose to love across physical boundaries and borders, just as God loves us.