Who's Afraid of the Dark? 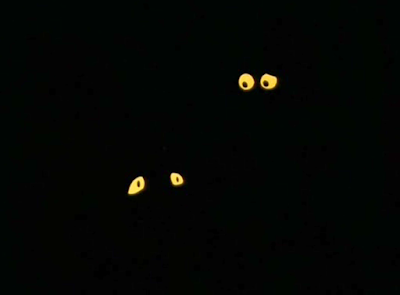 Who’s afraid of the dark? (Raise your hands.)

Okay, when you were children, how many of you were afraid of the dark? How many slept with a night-light? (Raise your hands)

How many of you sleep with a night light but tell yourself it’s so you can find your way to the bathroom? (I won’t raise my hand if you don’t.)

This is a sermon about being afraid of the dark. It’s a sermon about how to begin to search the interior darkness of the soul – or, at least, inspire you to take that journey.

This is a sermon about the work of Lent.

Each time I read this story of the encounter between Jesus and Nicodemus, I am struck by how much my understanding of Nicodemus has changed and evolved over the years.

When I was a child in Sunday School and Sister read us this story, I remember we would boo, right on cue, after the very first sentence, “There was a Pharisee named Nicodemus, a leader of the Jews.”

Boo! Hiss! It might as well have been the cartoon character, Snidely Whiplash from the Rocky and Bullwinkle Show. Wait! Am I showing my age? Okay, how about Lex Luthor or The Joker from the Superman comics? Oops, I mean movie! (Do people even read comic books anymore?)

As children, we knew Nicodemus was a Very Bad Man because he was a Pharisee. He was also a Jew. And, we were oh, so very carefully taught that it was Rome who killed Jesus but the Pharisees arranged it and “the Jews” who called for it.

It’s true. You have to be carefully taught, and the church, at the time, used scripture to reinforce that prejudice. Unfortunately, some churches still do. And, that has to change. 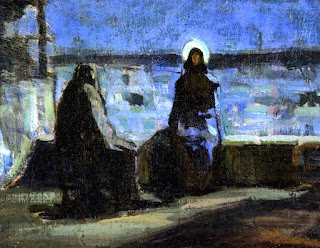 The very next sentence reinforced all the negative stuff we were being taught about Nicodemus: “He came to Jesus by night.” I can still hear the ‘tone’ in Sister’s voice, which intimated that he was a coward and/or something very sinister was about to happen.

It didn’t take much to convince me that bad things happen when the lights go out. It was a natural-born fact of every childhood that monsters live under the bed or in the closet and they will come out and hurt you as soon as the lights go out.

It did not matter that your parents came into your room after your cried and screamed and tried to reassure you by getting down on their hands and knees and looking under the bed or opening the closet door and proclaiming “See? There’s nothing there.”

Duh! That’s because the light is on now. Monsters only come out at night. Just like the boogeyman my parents also taught us about. That was another racial stereotype we were carefully taught.  Today, we use the more generic “Stranger Danger” – but everyone knows and understands.

But there was a reason my mother always called us to stay on the porch once the streetlights went on at dusk. Apparently, no monster or dangerous stranger of any race would dare to come on my mother’s porch. I mean, if you knew my mother, you wouldn’t.

Besides, there was a light on.

As I grew older, the monsters under my bed stopped bothering me, but the stories I heard in church or read in scripture or the prayers I said and was taught reinforced the negativity about The Dark.

Indeed, even the soaring poetry of the prayers in our beloved BCP seemed to lead the conspiracy:  Deliver us, O Lord, from the powers of darkness. Shine into our hearts the brightness of your Holy Spirit and protect us from all perils and dangers of the night.

Here’s the thing about Nicodemus. In many interpretations, he has been reduced to a foil. He is a contrast with and an enhancement to Jesus’ obvious superiority. He’s a coward and an idiot. He’s a Pharisee who seems to be tangled up in the weeds of the law.

We can’t decide: Is he too smart for his own good? Or is he, in fact, an embarrassment to his brothers whom he seems ready to betray? Is he too dimwitted to understand what Jesus is saying about being born again? 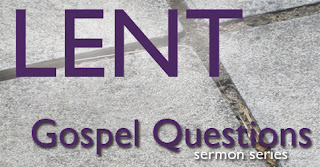 Then again, do we really understand the question Jesus asks Nicodemus: “Howcan anyone be born after having grown old?" Not really, I suppose, which is why it’s so easy to let Nicodemus carry our sense of incompetence for us.

Jesus doesn’t see him that way at all. Jesus receives Nicodemus as a sincere religious seeker and welcomes him and his searching mind. He immediately spots him as a member of the Pharisees – a Judge – and treats him with the respect accorded his position.

Perhaps Jesus, being a Rabbi himself, knows and understands that Nicodemus is here, at night, because the rabbis taught that the Torah was best studied at night, under the glow of the moon and the flicker of the candle, when it was quiet and the distractions of the day had subsided.

Nicodemus is not being a coward and trying to avoid being seen in this illicit liaison. Actually, he is using his study time to expand his search beyond the standard texts. Jesus himself has becomes the book into which Nicodemus delves. He searches every word from the mouth of Jesus for wisdom and understanding.

Nicodemus reminds me of a young student I had when I was a chaplain at University of Lowell. It was Palm Sunday afternoon. It was also the start of Spring Break. I knew there wouldn’t be many kids left on campus, so I had arranged to have a Palm Sunday service in my office.

Sure enough, only one student showed up. Jason was a biology major with aspirations to become a physical therapist. He was able to be at University because of student loans and a part time job and a veteran’s benefit, having done a few tours of duty during the Iran-Iraq War.

He was interested in physical therapy because, he said, he knew the benefits himself, having been seriously injured (that’s all he would say) during one of the many conflicts and combat he experienced while a soldier in the Persian Gulf.

You may remember that it is on Palm Sunday that we read the Passion of Jesus. You may also remember that there are many parts to that sacred reading. Well, there being just the two of us, Jason and I decided to take the scripture story a paragraph each and read through it together.

We were doing fine together, until we got to the part where Jesus is whipped and scourged. Jason started to slow down. He cleared his throat a couple of times and then his voice began to tremble. 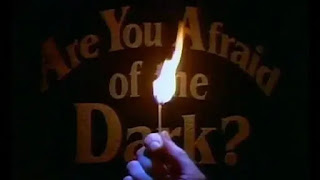 As I was reading my paragraph, I noted that Jason was taking some deep breaths. Before he took his turn to read, I asked him if he wanted to take a breath, at which point, Jason burst into tears, sobbing deeply.

When he came up for air, he looked at me and said, “I had no idea. I’ve never read this before. I don’t think I’ve ever heard it before. I had no idea of his real suffering.”

I had no intention of saying this to him. I just opened my mouth and the words came out, “Jason,” I heard myself say gently, “why don’t you tell me about your suffering?”

That was all it took. Jason poured out his story, his experience of war, which was horrific – beyond anything I could imagine a body or mind or soul surviving.

At the end of his war story, he took a deep breath and said, “You’re the first person I’ve talked with about the war. My parents don’t know. My girlfriend doesn’t know. I haven’t told any of my buddies or anyone here at the University. Just the docs at the VA Hospital. Oh, and I did tell my physical therapist. He understood because he had been wounded, too.”

And then, he took another deep breath and said, “But, now I know that Jesus knows. He knows my suffering because he went through even worse than I did. I never knew, Chaplain. I swear, I never knew. And, I went to Church. I went to Sunday school. I just never knew.”

After that, Jason came to my office once a week. We studied the Bible together. He called together a few of his friends and they told their friends.

When I left my chaplain’s position at ULowell, my office had between 25-30 students at weekly Bible study – mostly because Jason invited them. Oh, and we had pizza afterward.

I’ve lost track of Jason over the years. Last I heard, he was a physical therapist with the VA Hospital, helping others to recover from their wounds – seen and unseen – as someone had done for him.

Oh, and I heard he was co-leading a weekly Bible study with an Army chaplain, helping others to know the story of Jesus so they wouldn’t feel so alone, and would know that Jesus knew their suffering.

Oh, and Nicodemus? After that nightly encounter with Jesus, we don’t ever hear from him again. Except in the last chapter of John’s Gospel. His name appears with Joseph of Arimathea.

That name may sound familiar to you. It was Joseph who offered his brand new, never-used tomb as a burial place for Jesus. It was Nicodemus who helped Joseph wrap the dead body of Jesus in cloth along with some myrrh and aloes. Doing so meant that both men were ritually unclean and that they would be prohibited from participating in the celebration of the Passover.

And, it was sundown before the Sabbath. The darkness was about to surround them in ways they had never before experienced. They had clearly broken with the rest of the Jewish religious leadership. Surely, their absence from the Passover festivities would be noted and the reason discovered.

Who knew what kind of dangers waited for them?  It was about to get very dark. Very, very dark.

So, what say you?  Are you afraid of the dark? What is keeping you from taking the risk of searching beyond what is safe, what is tried and true? What secrets are you holding there, in the dark corners and crevices of your soul? What truths do you hold in secret darkness that need to be brought to the light?

As a Hospice Chaplain I know that, before people leave this earth, they need to know two things: Love and Forgiveness.

They need to know that they have loved and that they are loved.

They need to know that they have forgiven and that they are forgiven.

Some people don’t know these two things because of the secrets they hold in the dark. And, even though they’ve heard the gospel a hundred times, they don’t know that Jesus knows the suffering that is held in their secrets and their truths hidden deep there, in the dark corners and crevices of their soul.

It’s Lent. It is the Second Sunday in Lent. Are you afraid of the dark?

Time to turn on the night light of faith and seek Jesus who will greet us as pilgrims and love us and respect our questions.

John 3:16 is important to know: “For God soloved the world that he gave his only Son, so that everyone who believes in himmay not perish but may have eternal life.”

But John 3:17 is equally important: “Indeed,God did not send the Son into the world to condemn the world but in order thatthe world might be saved through him.”