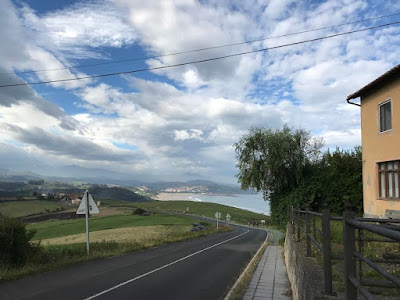 The Way leaves La Isla by dirt road leading to the villages of Bueno and Colvian to Colunga, up the hill to Cabonota to our final destination of Priesca where we visit the church of San Salvador, in the Principality of Asturia, a10th century chapel buil by Alfonso III.

We started the day inspired by some words from Parker J. Palmer, in his book, “Let Your Life Speak.”

“Most of us arrive at a sense of self and vocation only after a long journey through alien lands. But this journey bears no resemblance to the trouble-free “travel packages” sold by the tourism industry. It is more akin to the ancient tradition of pilgrimage – “a transformative journey to a sacred center” full of hardships, darkness and peril.

In the tradition of pilgrimage, those hardships seem not as accidental but as integral to the journey itself. Treacherous terrain, bad weather, taking a fall, getting lost – challenges of that sort, largely beyond our control, can strip the ego of the illusion that it is in charge and make space for the true self to emerge. If that happens, the pilgrim has a better chance to find the sacred center he or she seeks. Disabused of our illusions by much travel and travail, we awaken one day to find that the sacred center is here and now – in every moment of the journey, everywhere in the world around us, and deep within our our hearts.”

I elected today to opt out of the “cliff hanger” segment of The Camino. It is a steep climb up a cliff which follows the ocean. The path is reportedly only approximately 12-15 feet wide in places, only 2-3 feet wide in others, with no fence or guide rope between you and the cliff and the ocean.

Oh, and there are people on bikes who claim first right to the path, so you have to step back and cling to the cliff as they go by.

So, I decided that I have been on lots of cliffs in my life – both physical and metaphorical – and I will most likely be on another one before I take my leave, but not today. 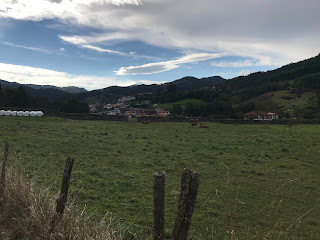 So, I walked around the little village of Bueno, standing eye-to-eye with cows and horses, talking with people who lived there, me in my broken Spanglish and they in there’s.

I met a wonderful old man who simply assumed that I understood him – and I did, mostly – who wanted to tell me about this shrine in the middle of two trees.

He said that the chestnut tree was many, many centuries old but, after the Spanish Revolutionary War, it had been hit by mortar and began to die. Someone in the village decided to take a piece of wood from it and helped it begin to root. The miracle is that, in the midst of the war, the shoot did take root and another tree began to grow next to the old dying tree.

Another miracle happened when the original tree, from which the shoot had been taken, saw the new tree growing, it, too, began to get healthy. And now, there are two beautiful chestnut trees in the center of town, with a wee little stone shrine to San Sebastian in the middle of them.

As near as I could understand the old man, who had a delightful way of winking at me as he tapped his forearm against my forearm for emphasis, said that it was “the blood of the martyrs that watered that tree, giving it life and hope for the future.” 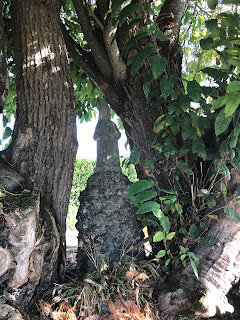 “Buen Camino!” he said, “Your path is this way, but all the roads to the Camino lead to your soul,” he said.

“ . . . . the sacred center is here and now – in every moment of the journey, everywhere in the world around us, and deep within our our hearts.” (Parker Palmer)

Thank you all for joining me on this Camino.

I feel your presence and your prayers and your support.

It means the world to me.