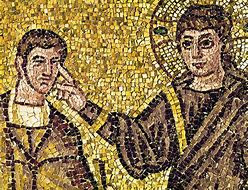 Have you ever read something that was so short and so succinct that the truth of it caught you up short? That happened to me the other day when I read something by Roman Catholic Contemplative, Richard Rohr.

He was talking about suffering and how suffering is transformative. He said, “When you can be healed yourself and not just talk about healing, you are, as Henri Nouwen said, a ‘wounded healer’.”

And then he said this, “Transformed people transform people.”

I’ve been thinking about that a lot this week, especially in terms of the gospel story about Blind Bartemaeus and what that might have to say to us about all that has been happening in our country this week.

So first, let me put the Gospel story into context. Bartemaeus, we are told, is the son of Timeaus. He is obviously known and at least pitied in his hometown of Jericho.

Well, scholars are pretty universal in their agreement that the story holds little historical value but it’s a great story, nonetheless.

So, the story goes that Noah cursed Canaan to be a slave and God gave the land of Canaan to Abraham and his descendants.

But the children of Israel, Abraham’s descendants, themselves became slaves in Egypt. Moses, led by God, led the people out of Egypt to the borders of the Promised Land of Canaan.

Moses charged Joshua, son of Nun, to take Jericho, the first city of Canaan to be taken back by the children of Israel. The Israelites marched around the walls once every day for six days with the priests and the Ark of the Covenant.

On the seventh day they marched seven times around the walls, then the priests blew their ram’s horns, the Israelites raised a great shout, and the walls of the city fell. Following God's law, the Israelites took no slaves or plunder but slaughtered every man, woman and child in Jericho, sparing only Rahab, a Canaanite prostitute who had sheltered the spies, and her family.

It is important to know a few things about Jericho in Canaan. The first is that Canaan, which had been the Promised Land, gradually became a place of disregard among the Jews.

Canaan was on the trade route and so many people from many foreign lands were there, interacting with the locals. They often intermarried with the Jews, leading them to be considered racially impure or “mongrels”. They also didn’t worship in Jerusalem during the High Holy Days. 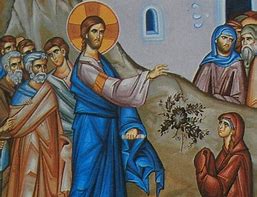 You will remember the story of Jesus and the Canaanite woman who begged for healing for her daughter. And, Jesus said to her, "It is not right to take the children's bread and toss it to the dogs." "Yes it is, LORD," she said. "Even the dogs eat the crumbs that fall from their master's table." Well, the reference to “dogs” is a reference to the racial status of the Canaanites.

So, it’s important to remember that in agreeing to heal the man from Jericho, Jesus is healing another Canaanite. This explains a bit why the neighbors might be ‘shushing’ him and ‘sternly ordering him to be quiet’ when he calls out to Jesus for help. They have no reason to expect that this Nazarene Rabbi will help a Canaanite.

But, Jesus does. “Go,” says Jesus to Bartemaeus, “your faith has made you well.”

It’s also important to note that Jericho today is a city located near the Jordan River on the West Bank in Occupied Palestine. It would appear that the racial and ethnic tensions which existed in antiquity persist today.

Mark’s gospel story ends this way, “Immediately he regained his sight and followed him on the way.” And, where would that be, you ask? Where was it that Bartemaeus, now with his sight fully restored, follows Jesus?

If we continue reading Mark’s story, from Jericho, Jesus and his disciples head toward Jerusalem where they walk right into the festivities for the celebration of Passover. We know all too well what is about to unfold. The crowd will echo the same greeting Bartemaeus used with Jesus. They will hail him as Son of David and shout Hosanna’s in his name.

And, oh, what Bartemaeus will see unfold before his very eyes! Oh, the horrors and the terrors he will witness. Oh, the betrayal and the brutality he most certainly wished he had never seen.

We don’t know what happened to Bartemaeus after the events we now call Holy Week. We don’t know if he witnessed either the Crucifixion or the Resurrection. But, I’m thinking there was a reason that the story of this particular man’s healing in the particular city of Jericho was told just before the events in Jerusalem.

Our modern eyes have witnessed things this week that we wish we had never seen. Fourteen pipe bombs were sent to 10 people – all outspoken critics of the present administration. On Saturday, at least 11 people were murdered and several others seriously injured, including 4 police officers, as they gathered at the Tree of Life Synagogue in the bucolic neighborhood of Squirrel Hill in Pittsburgh, PA. 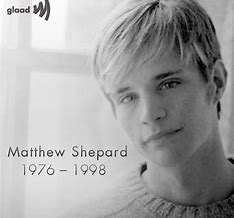 We are living in a time of blinding hate and palpable anger which are being fueled by violent, hateful, bigoted rhetoric. Normal levels of disagreement and dissatisfaction are now exaggerated and exacerbated to dangerously high levels.

And, in the midst of all of this violence and hatred came the internment of the ashes of Matthew Wayne Shepherd, a 21 year old gay man who, twenty years ago, was robbed, tied to a fence, pistol-whipped and left to die in the freezing cold of a field in Wyoming.

Matthew’s family has been holding onto his ashes all these years, afraid that “haters” as his father Dennis named them, would desecrate his resting place. His parents thought to spread his ashes among the hills and mountains of his beloved home state of Wyoming, but they had hoped that they might have a place where they could visit the earthly remains of their son.

As it turned out, that safe place became available in a crypt at The Cathedral Church of St. Peter and Paul, also known as “The Washington National Cathedral”, an Episcopal House of Worship in Washington, DC.

Matthew was an Episcopalian and loved serving as an acolyte when he was a child. And so, after 20 years, Matthew’s physical remains were laid to rest on Friday, and in a place where people are blind to race or gender, religion or creed, age or ethnicity, or sexual orientation. The Cathedral is known as “a place of worship for all people”. And so it is.

In his homily, Bishop Gene Robinson told the story of the report of the police officer who first came upon Matthew’s body, tied to that picket fence. There was a deer lying down in the snow next to Matthew. From all appearances, that deer had been there all night, keeping vigil with Matthew. He had not been alone. One of God’s creatures had great compassion on his suffering and had stayed with him all through that long, awful, painful, frigid night.

The police officer reports that as she approached Matthew’s body, the deer looked straight into her eyes and held her gaze for a long time before getting up and leaving. “I knew that that was the Lord, right there,” she said.

Bishop Robinson praised Mr. Shepard’s parents for not just grieving privately but for turning his killing, “this horrendous event,” into “something good.”

The more I think about it, the more I think that’s the real miracle of this gospel story of Blind Bartemaeus. I think the miracle was not so much about having his sight restored but more about what he did with his ability to see. He opened his eyes and followed Jesus – through his crucifixion on the cross and to his resurrection from the tomb. 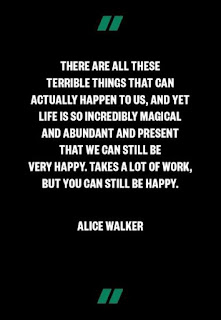 The more I think about it, the more I think that can be the real miracle of the story of our lives. I think the miracle that is waiting to happen is for us all to open our eyes to what violent rhetoric and hateful speech is doing to us as individuals and as a nation.

When we do that, when we open our eyes, we can decide to end the violence and the hatred and turn all of these horrible events into something good.

Like Bartemaeus, our faith can and will heal us.