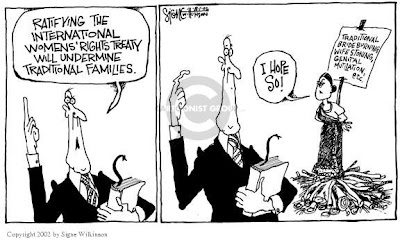 Secretary of State, Hillary Rodham Clinton, has wasted no time in putting the needs of women on the front stage of international politics.

She is drawing attention to a document known as CEDAW: The Convention on the Elimination of All Forms of Discrimination against Women, which comes up for ratification again.

It is a document of the United Nation's Commission on the Status of Women, which was created in 1946. You can find the text of the document here.

The UN's CSW, working with the UN's Commission on Human Rights, helped to birth the MDGs - Millennium Development Goals - which has been embraced by the Anglican Communion as part of a world-wide, interfaith effort to end poverty and hunger, provide universal education, promote gender equality and maternal child health, combat HIV/AIDS, increase environmental sustainability and create global partnerships. 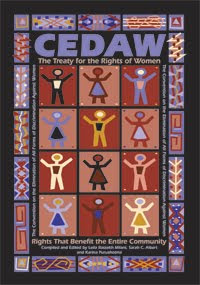 The United States remains the only democracy in the world that has not ratified the CEDAW Treaty, putting our country in the dishonorable company of states such as Iran, Somalia and Sudan

The Convention to Eliminate All Forms of Discrimination Against Women (CEDAW) is the most comprehensive international treaty promoting the advancement of women worldwide.

It establishes a legal framework to which all governments must adhere, to ensure the equality of women in various areas of life including politics, law, employment, education, health care, commerce and domestic relations.

Call your Senators at 202-224-3121 or click here to enter your zip code and send them an email. Urge them to support ratification of the CEDAW Treaty for the Rights of Women today!

The CEDAW Treaty provides a universal standard for women's human rights. It provides a fundamental framework for ending international violence against women, ensuring girls access to education, and promoting economic opportunity and political participation for women.

The United States should strive to be a leader and set an example for the rest of world in its commitment to women and expanding women's rights by ratifying CEDAW.

As Episcopalians and Anglicans who have also fully embraced the MDG's, encouraging our government to sign the CDAW Treaty is part of our deep commitment to our baptismal vows.

TAKE ACTION
1. Call the Capitol switchboard at 202-224-3121 and ask for your Senators' offices. Urge your Senators to support ratification of CEDAW.

2. Click here to enter your zip code above to urge your Senators to support ratification of CEDAW.

3. Send this alert to other concerned citizens - your grassroots network, your friends and coworkers. Encourage them to contact their Senators today!
Posted by Elizabeth Kaeton at 7:48 AM

Thank you for bringing this to my attention! This is unconsionable that we have not ratified this treaty! I have e-mailed my senators and friends and posted it to my Facebook profile. There is a special call in day on the 26th of August, and a Facebook event if anyone is interested in using that to spread the word.

Hi,
I just wanted to say that CEDAW was adopted by the UN General Assembly in 1979; this text makes it sound as if it was written in 1946 which is when the Commission on the Status of Women was founded. Otherwise, keep your good work and raise awareness regarding CEDAW. The U.S. seems to think it does not need it, but I do not agree.