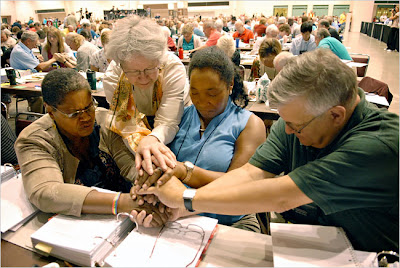 After an emotional debate over the authority of Scripture and the limits of biblical inclusiveness, leaders of the country’s largest Lutheran denomination voted Friday to allow gay men and lesbians in committed relationships to serve as members of the clergy.

The vote made the denomination, the Evangelical Lutheran Church in America, the latest mainline Protestant church to permit such ordinations, contributing to a halting sense of momentum on the issue within liberal Protestantism.

By a vote of 559 to 451, delegates to the denomination’s national assembly in Minneapolis approved a resolution declaring that the church would find a way for people in “publicly accountable, lifelong, monogamous same-gender relationships” to serve as official ministers. (The church already allows celibate gay men and lesbians to become members of the clergy.)

Just before the vote, the Rev. Mark Hanson, the church’s presiding bishop, led the packed convention center in prayer. When the two bar graphs signaling the vote’s outcome popped up on the hall’s big screens seconds later, there were only a few quiet gasps, as delegates had been asked to avoid making an audible scene. But around the convention hall, clusters of men and women hugged one other and wept.

“To be able to be a full member of the church is really a lifelong dream,” said the Rev. Megan Rohrer of San Francisco, who is in a committed same-sex relationship and serves in three Lutheran congregations but is not officially on the church’s roster of clergy members. “I don’t have to have an asterisk next to my name anymore.”

But the passage of the resolution now raises questions about the future of the denomination, which has 4.6 million members but has seen its ranks steadily dwindle, and whether it will see an exodus of its more conservative followers or experience some sort of schism.

“I think we have stepped beyond what the word of God allows,” said the Rev. Rebecca M. M. Heber of Heathrow, Fla., who said she was going to reconsider her membership.

Conservative dissenters said they saw various options, including leaving for another Lutheran denomination or creating their own unified body.

A contingent of 400 conservative congregations that make up a group that calls itself Lutheran Core is to meet in September. Leaders of the group said their plans were not to split from the Evangelical Lutheran Church but to try to protect its “true tenets” from within.

The Episcopal Church has endured the most visible public flashpoints over homosexuality, grappling in particular in the last few years with the consecration of gay bishops. It affirmed last month, however, that “any ordained ministry” was open to gay men and lesbians.

Earlier this year the Presbyterian Church (U.S.A.) rejected a measure that would have opened the door for gay ordination, but the margin was narrower than in a similar vote in 2001. The United Methodist Church voted not to change its stance barring noncelibate homosexuals from ministry last year, after an emotional debate at its general conference.

But the Evangelical Lutheran Church’s heavily Midwestern membership and the fact that it is generally seen as falling squarely in the middle of the theological milieu of mainline Protestantism imbued Friday’s vote with added significance, religion scholars said.

Wendy Cadge, a sociology professor at Brandeis University who has studied Evangelical Lutheran churches grappling with the issue, said, “It does show, to the extent that any mainline denominations are moving, I think they’re moving slowly toward a more progressive direction.”

“In the same sense that the Iowa court decision might have opened people’s eyes, causing them to say, ‘Iowa? What? Where?’” said Laura Olson, a professor of political science at Clemson University who has studied mainline Protestantism. “The E.L.C.A. isn’t necessarily quite as surprising in the religious sense, but the message it’s sending is, yes, not only are more Americans from a religious perspective getting behind gay rights, but these folks are not just quote unquote coastal liberals.”

The denomination has struggled with the issue almost since its founding in the late 1980s with the merger of three other Lutheran denominations.

In 2001, the church convened a committee to study the issue. It eventually recommended guidelines for a denominational vote. In 2005, however, delegates voted not to change its policies.

Before the vote but sensing its outcome, the Rev. Timothy Housholder of Cottage Grove, Minn., introduced himself as a rostered pastor in the church, “at least for a few more hours,” implying that he would leave the denomination and eliciting a gasp from some audience members.

“Here I stand, broken and mournful, because of this assembly and her actions,” Mr. Housholder said.

The Rev. Mark Lepper of Belle Plaine, Minn., called for the inclusion of gay clergy members, saying, “Let’s stop leaving people behind and let’s be the family God is calling us to be.”

Michael Luo reported from New York, and Christina Capecchi from Minneapolis.
Posted by Elizabeth Kaeton at 10:03 AM

I sat and watched the streaming. The chair had warned that there should be no outward display pro or con at the vote, but you could hear the gasp. I don't think that they were really ready for this to pass. But it did. Funny what happens when you let prayer and the Holy Spirit in!

Now the hard part begins...keeping the dissenters in the church.

I'm starting to believe that this really is the Twenty-First Century. The exclusion of Gays and Lesbians from participating in mainstream religions may become one of those sad little footnotes in history.

Wonderful news. Another sane decision which will move the church into new realms.