If it's August, it's Red Sox Nation! 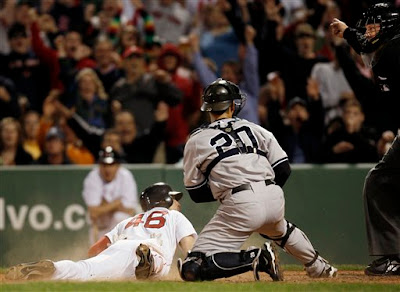 It almost - almost - doesn't matter that, over the weekend, the Boston Red Socks slipped from tied for first place with the NY Yankess into six and a half games behind in the division and tied for the Wild Card Lead.

Okay, okay. So, The Red Sox are now 8 for 76 in the last two games, covering 24 innings. They have not advanced a runner to third base in the last 23 innings.

There is no panic in Red Sox Nation this morning.

Division titles are not won in early August. There are too many games left to play for that.

In two days, my 'Sox' will be playing Detroit and they'll start to make their way back up again. The Yankess just got lucky last night, is all.

Like the month of August itself, my 'Sox' are just warming up - just starting to get really hot.

I was born and brought up in Massachusetts. I know the Holy Ritual of Summer Baseball, especially as played by the Boston Red Sox.

Therefore, I know a little something about 'hope'.

I grew up learning the mantra: "Yeah, well, just wait until next year."

I am no Big Sports Jock. I really don't understand all the hype about football and while I like to watch an occasional basketball game - especially the WNBA games (two-time Olympic medalist Yolanda Griffith is retiring - are you kidding me?) - I really only follow the Boston Red Sox.

Oh, and the NY Yankees - but only when they are playing the Boston Red Sox.

Truth be told, I really don't even watch the games much until August. In my mind, it's part of what it means to be August. Indeed, I wouldn't know what month it was unless I could walk down the street and hear car radio stations tuned to the Game or walk by houses and see the flicker of TV screens as the melodious sounds of the announcer's voice over the constant roar of the crowd found its way to my ears.

Nothing will get my heart rate to increase faster than hearing, "Bottom of the seventh, bases loaded, two balls, two strikes. Tied score: 3-3. A-Rod is up at bat. Rameriz is looking tired. Clay Buchholz is warming up in the pen. . . . "

Oh, man! Where at the hot dogs? Yes, two. Nah, no beer. I'll take a Diet Pepsi or Coke, though. Mustard and onion, please. Don't forget the chopped onion. Last time you forgot the onion and the Sox lost. My boys get jinxed if there's no chopped onion on the dogs. I got my lucky Red Sox red socks on, so don't mess this up. And potato chips - if the Sox lose, I'll have heartburn all night from those fries.

It's been called "The National Pastime". In some places, it's the "Local Obsession."

Me? It just wouldn't be August without Red Sox baseball.
Posted by Elizabeth Kaeton at 8:33 AM

Elizabeth, I was raised by fanatical "red flops" fans. It's one of the few team I will watch. Going to see the Sox play the Yankees in Fenway was one of the pleasures of college days. I opt for beer though.

I knew we were sisters under the skin.

My condolences on Boston’s weekend performance. Given the past record, I thought the Yanks would go down. I don’t watch the games. It’s Bad Karma . If I watch, they lose. So I never know what happened until it’s over. As it stands now though, It could be NY and Boston in the post season and that’s better than the World Series as far as pure drama goes.

Motheramelia - I can't stand the smell of beer but I love the idea of hot dogs, baseball and beer. Have one for me during the next game.

Cecilia - what a GREAT story. Perfect. I feel the same way. Sisters? Hey, if your blood is red, you are part of Red Sox Nation.

Hey, Bill, I got an idea. Next time NY plays Boston, you watch the game and I'll be sure to have chopped onions on my hot dog. ;~)

I wish Pittsburgh had a professional baseball team...

Baseball. That's one of those interminable games with a stick, isn't it? ;-)

Pseudo - You can always root for the BoSox. We'll take fans from anywhere.

IT - One of my homiletic professors said "The bigger the ball the lower the IQ." Think of it: Ping pong, Golf, Tennis, Baseball, Soccer, Football. Always makes me giggle.

I have average IQ so I guess its no surprise that I'm such a fan of Baseball - well, the home team anyway. Your IQ is off the charts so I'm not surprised that no ball is small enough to entice your sense of entertainment.

If anything, I'm thinking maybe 'ping pong' is more your speed.

LOL, Elizabeth! You are right, I am not a sports fan. I read the sports pages occasionally just so that I can make conversation with taxi drivers and I am distinctly uncoordinated.

Gotta love those Red Sox no matter what! I just had a burger 'n beer waiting for the game to start. Maybe we can beat Detroit with a little bit of luck.