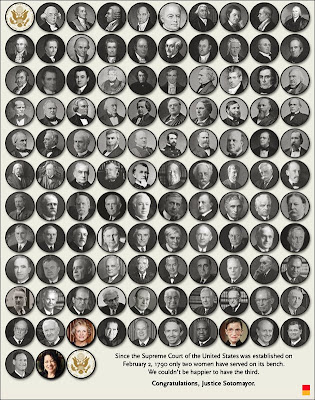 Judge Sonia Sotomayor has FINALLY been confirmed as Supreme Court Justice, making her the 111th justice, the first Latina and the third woman to be appointed to the high court.

This great poster is making the rounds on the internet. If you click on the poster, the picture will enlarge so you can see it in full.

The vote was 68 to 31. She did pick up some Republican votes like retiring Sen. Kit Bond of Missiouri who said, "There's been no significant finding against her, there's been no public uprising against her. I will support her, I'll be proud for her, the community she represents and the American dream she shows is possible."

However, thirty-one Republicans would not confirm her appointment based on the "fact" - at least in their view - that she was . . . are you ready for this? . . .racist.

There is an interesting article in today's Religion Dispatches entitled Sotomayer, Evangelicals and Racism by Michael J. Altman.

You can read it all for yourself, but here's the quote that caught my attention:

"So, when Republicans cast Sotomayor as an activist judge because she acknowledges the social and institutional role of race in America they are adopting the same racism theory as modern Evangelicals. This is the beam shared by Evangelicalism and the GOP—the centrality of the individual. The individual is the locus for economic growth for fiscal conservatives and must be protected from the weight of society and its need for tax dollars; similarly, the individual is the locus for spiritual change and must find a one on one relationship with Jesus in order to dispense God’s grace into the world. Such an emphasis becomes problematic, however, when it begins to push the realities of our communal and social existence out of vision. When there becomes no racism, just racists."

It's an interesting perspective, one that I'm sure we'll be hearing more of in the days and months ahead. I'll certainly be considering it and writing about it in future blogs.

But now is the time for celebration. Her swearing-in, scheduled for Saturday, will be an historic occasion, sure to have special significance in the Hispanic community from which she came.

For the right, racism is when "we" (whites) are victimized by the attempts of others to undermine "our" (white) privilege.

What about the millions of Americans who aren't part of the "we."

It's about Time, God's Time!

I am a libertarian who believes that the Constitution clearly gives the President the sole right to choose Supreme Court justices, with the advice and consent of the Senate.

It is clear from the writings of the Founders that the advice part was simply to make sure some scoundrel or incompetent did not get on the court.


But in the 1980s, it was the Democrats who decided to challenge Ronald Reagan's choice of Robert Bork, a conservative, but totally qualified and prominent jurist, on the basis of his ideology and not his qualifications.

Ever since, the battles over Supreme Court justices have turned into ideological and political battles that have nothing to do with the legal qualifications of the justice.

I guess Rev. Kaeton it depends on whose ox is being gored. Let's look back at the votes - Republican and Democrat - for recent appointees by Republican Presidents and compare those to this.

I'll bet you will find fewer Democrats voting for the Republican judges than you did with Justice Sotomayer.

Just pointing out that hypocrisy is rampant on both sides.

For me, I believe that elections have consequences and the Constitution is clear, the President, whether you support him or not, has the right to his pick for Supreme Court justice.

Okay, Jim. That's not where I was going with this - not about hypocrisy, but more about the Evangelical connection - but your point is well made and well taken. Thanks for stopping by.