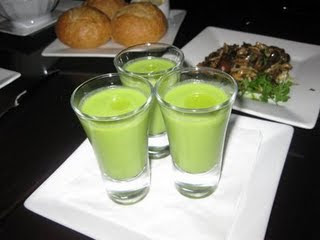 The new Air Conditioning / Heating Unit will be completely installed and ready to rock 'n roll by no later than 12 noon today.

It has been promised.

After two days and two unbelievably hot nights (it was 92 degrees in the house at 11 PM, which was before a magnificent rain storm - complete with large claps of thunder and brilliant lightening - cooled things down to 86 degrees at 3 AM), I'm not exactly "standing on that promise" but I do live in "sure and certain hope".

So, I suppose it should not come as a surprise that my brain cells have pretty much wilted in the heat. Whatever creative thoughts I have are turning to excited anticipation of and preparation for having some friends come this week end.

Which means, for me anyway, cooking up something special.

Not long ago, I was at an 'event' which started with a variety of 'soup shooters' - small shot classes filled with cold soup. As I remember, it was cream of asparagus, gazpacho and zucchini.

Not only did it present well, but they were absolutely delicious and refreshing. It was a perfect compliment to the light summer dinner which followed.

I called the caterer of the event and, after some of my best sweet-talking, got the recipes. I'm going to spend the late morning grocery shopping in the local air conditioned Harris Teeter's, then, stop by my local produce stand, and, by the time I come home or shortly thereafter, I intend to cook up a storm in air conditioned luxury.

Or, at least, start the first of the 'soup shooters'. After I take a nap.

Here's the first of the recipes I intend to start this afternoon. It really is pretty amazing.

Add vegetable stock and lemon juice and bring to a boil. Add salt, pepper and herbs.

Simmer until vegetables are soft, about 25 minutes.

Puree soup in blender or processor in several batches.

Stir in Worcestershire sauce and cream (if soup is too thick, add more cream.

Allow to cool then refrigerate at least two hours, but it's best if made a day or two before you plan to serve.

Pour cold soup into pitcher for pouring. Pour into four - six ounce shot glasses, making sure any splashes are wiped off.

Garnish with fresh dill and add a wide straw if desired.

Serve with thin bread sticks or small rolls (I've got a recipe for small, 1 inch rosemary biscuits that should go well with this).

There should be enough for a dozen shooters with enough left over for a meal the next day.

So then, off I go into the heat of the day - or, the cool of the supermarket, as it were - in great anticipation of returning home to an air conditioned home and an afternoon and early evening of creative cooking.

Life is good.
Posted by Elizabeth Kaeton at 7:58 AM

Glad to hear the AC will finally be in and working. It was fairly hot up in Jersey this weekend. I didn't know just how bad until I went to the docs office this am for a blood test and they couldn't draw any blood. I was dehydrated. This elicited a scolding from Ms Conroy. “ I told you so”, “You never listen”, “You see, I was right”, and so forth and so on.
It was also probably the reason I woke up with a splitting head ache this am. The dehydration that is, not Ms. Conroy. So now I’m walking around with a 12 pack of water trying to undo what I did.

The egrets are beautiful.

The soups shooters sound delicious. I love gazpacho and plan to try the recipe you gave today. The shrimp and pasta dish you described the other night sounded delicious too!

Bill - Ms. Conroy was not known as "Mother Superior" in our house for nothing.

Well, TA, the soups are infinitely easier to make than the pasta dish, which wasn't really all that bad - especially if you make it a community event.

The recipe sounds wonderful!
We will be picking the last of the zucchini soon and this will be a perfect end of summer treat. Most in my family are not fond of Worcestershire sauce, so I'm wondering what you might suggest as a replacement?

This may NOT be eaten by lovers who are trying to lose weight!

This does not help a partner to lose weight!

All of your recipes sound intriguing and needless to say very tasty.

We don't do zucchini but I bet asparagus would work.

6-oz. shot glasses?? That could be SOME party! Filled with cold soup sounds delicious--Blanton's, a bit dangerous!